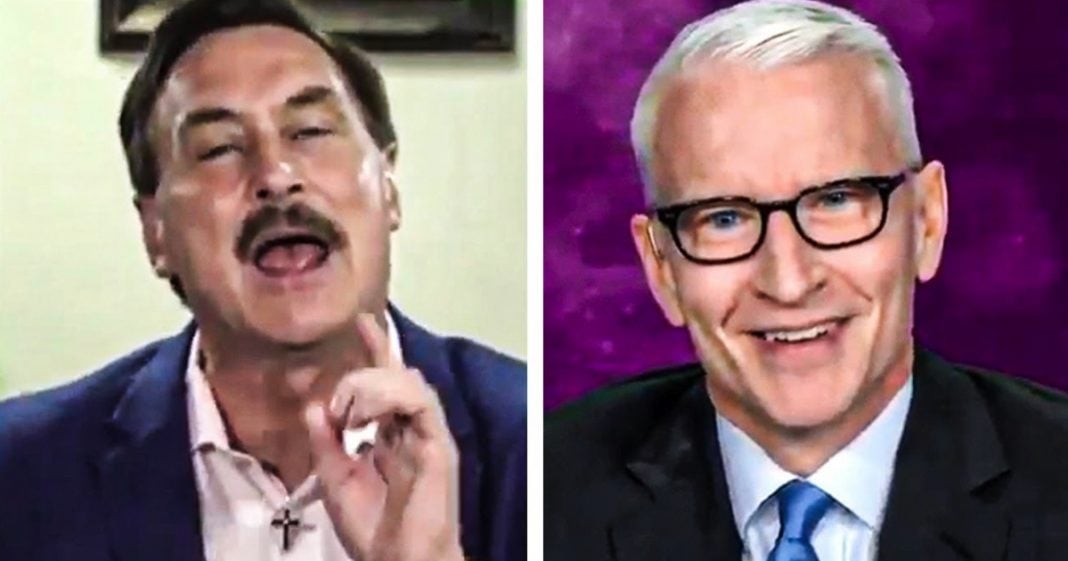 Mike Lindell, the founder of My Pillow, went on CNN with host Anderson Cooper on Tuesday, and it could not have gone worse for the self-described “sleep expert.” Lindell has been pushing an unproven treatment for COVID-19 that he has a financial stake in, and Cooper rightfully called him out for his dangerous medical advice that could seriously harm Americans. Ring of Fire’s Farron Cousins discusses this.

Uh, my pillow, founder and CEO, Mike Lindell has been out and about making the rounds in the media, promoting what he believes is going to be a cure all, uh, for COVID-19 a drug that by the way, has not yet been approved by the FDA for anything at all. It’s actually made from a toxic plant. The drug is called Oleandran and he believes and has been touting as such that this thing is going to be able to cure possibly prevent COVID-19. And so he went on CNN with Anderson Cooper to talk about his miracle, snake oil and Anderson Cooper promptly called him out, not just for being the snake oil salesman with this thing, but then started actually calling him out for other things that most people weren’t aware of. It was beautiful. Take a look.

I am just telling you, this is the answer wouldn’t you want to save lives? This is what my heart is. I’ve said even to my friends and family, you could be in the old West, standing on a box, telling people to drink amazing glory to God. I do what Jesus has me do. I need to get the glory to God and I want to help you. [inaudible] I’m not being driven by these that are not remedies, never been money driven. And why would I do this? Ask yourself why would money in my reputation? If I didn’t, if I only have a week in this project, you don’t have a great [inaudible] you’re in my prayers. And it’s because they destroyed me. When I went all in for this great president. That’s what it was. I was in the better business Bureau. You, because you support shows up for their torture, where their highest award they give to the best company. Then I’m going to advertise president. As soon as I went all in for the president, the better business Bureau plus is sad. It is sad that they would, their companies do stuff like that.

Faith for you to lie. Like this is really extraordinary to me At your advertising, by the truth. I’ll tell you the truth. And that is the truth. Okay? Okay. So that was, that was nuts. Uh, let’s be honest here. That whole exchange was rather crazy for those who are wondering why Mike Lindell says, I’m just out of here, I’m doing whatever God’s telling me to do. Mike Lindell had a religious awakening. He had been addicted to drugs for many years, got clean, uh, found religion. And he credits that with keeping him clean. So good on him for that, right? We’re absolutely not going to shame anybody for that, but that just in case, you’re wondering why he’s saying all this about God is sending me out here. Um, it’s because he believes the religion helped save him from the life of drugs. He went on to found my pillow. He’s made millions of dollars and he’s also faced many, many lawsuits over false marketing claims. That’s what Anderson Cooper was talking about. And some of these I actually knew about, but I didn’t know the extent folks.

This man has been sued so many times because he and his company are essentially total frauds with everything they say and their commercials. Now, the one I knew about was the, uh, early days of my pillow. All the commercials said, you buy one, you get one free. And then you go and you look it up in the pillows, a hundred dollars like Holy crap, it’s a hundred dollars, but you get to, well, it turns out the price of each pillow was actually just $50. So that is not in fact, buy one, get one free. You’re paying for two and you’re getting two, but they’re making you think it’s a good deal. Even though they just doubled the price. And I dunno. So I knew about that one. I knew they had to pay out for that one, but here’s some other ones. Investigators say the company also touted my pillow as the official pillow of the national sleep foundation, but failed to disclose its financial connection with the group as required by law because the national sleep foundation is a made up thing by these companies.

They created it. National sleep foundation. Unfortunately, folks does not exactly exist. Uh, that claim is still on the company’s website, but under the settlement must come down. By the end of January, this is an old article, uh, and agreeing to the settlement. My pillow admits no wrongdoing. The penalties include 100,000 in charitable contributions. This is with regards to the, uh, lawsuit that Cooper was specifically talking about. My pillow still faces two class action lawsuits over its marketing. One complaint filed in California, cites claims that inventor and founder Lindell was a quote sleep expert. When according to investigators, he has no expertise in sleep science or medic [inaudible].

They actually had to investigate whether the guy was a sleep expert. That’s, that’s re I want to know how that investigation went. Like, I really want to know what it takes to qualify as a sleep expert, but more importantly, what it qualifies to not be considered a sleep expert. And I know there is a science to it. I know there are medical professionals that devote their careers to sleep, but at the same time, dude, you’ve been falling asleep every day of your life. You should know, at least a little bit of it, you know, maybe not asleep expert, but at least, you know, uh, uh, sleep, uh, know, no, uh, I can’t, I can’t think of the word right now, but you know, master, you don’t have to be expert level, but you’ve probably mastered sleep at this point. No, I’m just messing with you.

The point is they’ve lie. This company has lied to you from day one. And, uh, the other claim, California investigators also say MyPillow promoted the product’s ability to solve sleeping problems, such as insomnia, snoring, neck, and back pain. Uh, but there is actually no evidence to back those claims up whatsoever. So the question is, why is all this important, right? Lindale’s not out there promoting my pillow. He’s out there promoting a medicine again, made from a toxic plant. So if this thing is not made properly, uh, this could end very badly, could also be fine. They make, uh, medicines and foods out of toxic plants all the time. So sure. I’m sure it’s going to be safe from toxins, but the question is, is it actually going to do what it says recently? Lindale became a board member of Phoenix biotechnology. And this is the company that is making this Holy Andrew and drug.

They’re the ones putting it out. Lindell’s the one out there, hyping it, but this is the same Michael and Dell. This is why I went over all the fraud. This is the same Lindell that did all of that. That continues to do all of that. So if we can’t trust him with the claims, he’s making about a friggin pillow, how in the hell? Why in the hell should we ever trust this man? When he’s talking about a medication I wouldn’t not at all. He has lied about the efficacy of his products in the past. He has lied about the science, lied about the science behind his pillow. And we’re supposed to take his word that this compound, this chemical compound, that his company is creating is somehow going to cure COVID or cure anything else. No, that’s dangerous. Believing this man is dangerous. Trusting. This man is dangerous.

This is man for his other company. By the way, also, as Cooper pointed out has an F from the better business Bureau, this company that he is running is ripe with fraud, corruption, and abuse. We have seen that in the lawsuits. We have seen that in the settlements though, they have admitted to no wrongdoing. Uh, the facts don’t lie though. Folks, the facts don’t lie. And that is why I personally would never trust any kind of miracle cure or drug that this man is selling. He has a history. He has a history of being dishonest. He has a history of being sued for these things. His company has a history of lying in their marketing materials. This is not the kind of company that we should be trusting. He is not the kind of guy we should be trusting. And any medicine that he pushes out should probably, you know, not be trusted.

He’s, he’s created a pattern of behavior here, and he has not shown any signs of changing that particular behavior. And that’s, what’s troublesome here. Anderson Cooper was right to call him out on this, that a beautiful job by Cooper, by the way, I just hope enough people see that to understand that. Yeah, you’ve got some medical companies out there doing some great things, trying to come up with cures or treatments for this devastating disease. But you all, I also have a lot of charlatans out there claiming they’re doing the same thing. We need the media to actually do its job job and find out which is which.