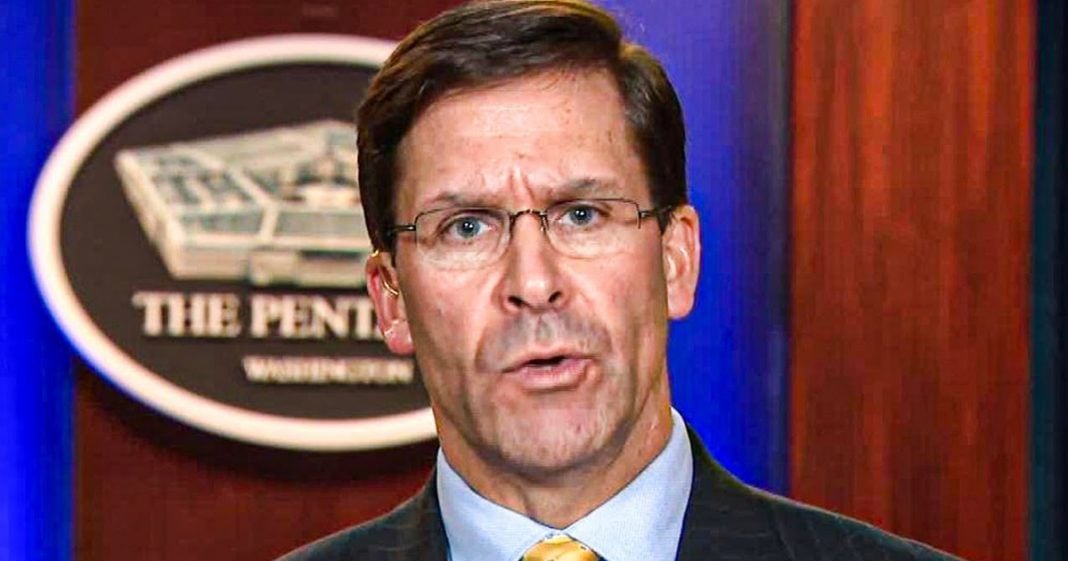 The United States does a really poor job of taking care of our veterans, and the Pentagon is actively trying to make it even worse. In spite of the fact that they just got their yearly budget of $740 billion, the Pentagon is trying to decide whether healthcare for the military is actually worth it, and they may cut a couple billion dollars from the healthcare budget for our troops and veterans. Ring of Fire’s Farron Cousins explains what’s happening.

Tuesday number four, three, two, one recently, uh, both the house and the Senate approved a $740 billion budget for the United States military. Uh, the Pentagon for one year $740 billion for one single year, just like the year before. And the last several years when they have been receiving more than $700 billion every single year. But somehow even though they’re getting more than $700 billion, every single year healthcare for active duty troops for our veterans is just too doggone expensive. And so the Pentagon in recent days has actually been going back and forth about whether or not to just slash billions of dollars from the VA, from the, uh, military benefits of active duty troops. You know, the ones that we’re still keeping over there in the middle East for absolutely no reason other than intimidating other countries. And, you know, to come back bruised, broken or dead, and we’re going to cut their healthcare because it’s too much money every year out of the $740 billion that the Pentagon has.

They can’t afford an extra 2.2 billion for healthcare for these men and women that we are intentionally putting in harms way for absolutely no benefit to the United States whatsoever. They’re not out there fighting back and oppressor that seeks to overthrow the United States, such a thing doesn’t actually exist right now in the world. They’re not out there fighting to protect America’s best interests because freedom is under attack. I know Republicans love to say those kinds of things, but it’s simply not the case. They aren’t out there fighting because we need to win a fight. They’re out there fighting to protect the military industrial complex that feeds off of that $740 billion a year. And as I said, they’re coming back bruised and broken or dead, and 2 billion out of the 740 billion they get every year is too much for healthcare. Oh, but don’t worry. Defense secretary Mark Esper.

Uh, he said recently that, uh, actually this is from Politico Esper and his deputies have argued that America’s private health system can pick up the Slack for any service members who lose coverage. So don’t worry if you lose, you’re actually very good military health care. You can go to that system. That’s screwing over the rest of us. Isn’t that fun? The one where, uh, your insurance company doesn’t get to negotiate prices with drug companies like the military, his health care plan does. So not only do you have to go to crappy insurance, that you’re going to pay a heck of a lot of money for you’re also then going to pay more for your doctor’s visits. You’re going to pay more for your prescriptions. You’re going to pay more for everything. Let’s look up, okay, look, let’s see 740 billion a year, and we just want 2 billion. So what percentage would that be? That would be

It’s 0.2% of the budget 0.2% of the militaries yearly budget. And that is apparently too much to pay for these men and women that we are sending overseas, getting them killed, having them kill other people who do not pose a threat to the United States. And in spite of all that, in spite of the rise in PTSD, in spite of the rise and people coming back missing parts of their body, we’re now looking at them and saying we only have $740 billion to spend this year. And we would rather spend it on fancy new cool tanks and guns and planes. So you’re going to have to go into the crappy insurance pool best of luck with that. Cause we don’t even pay you really enough to be able to afford private health insurance.