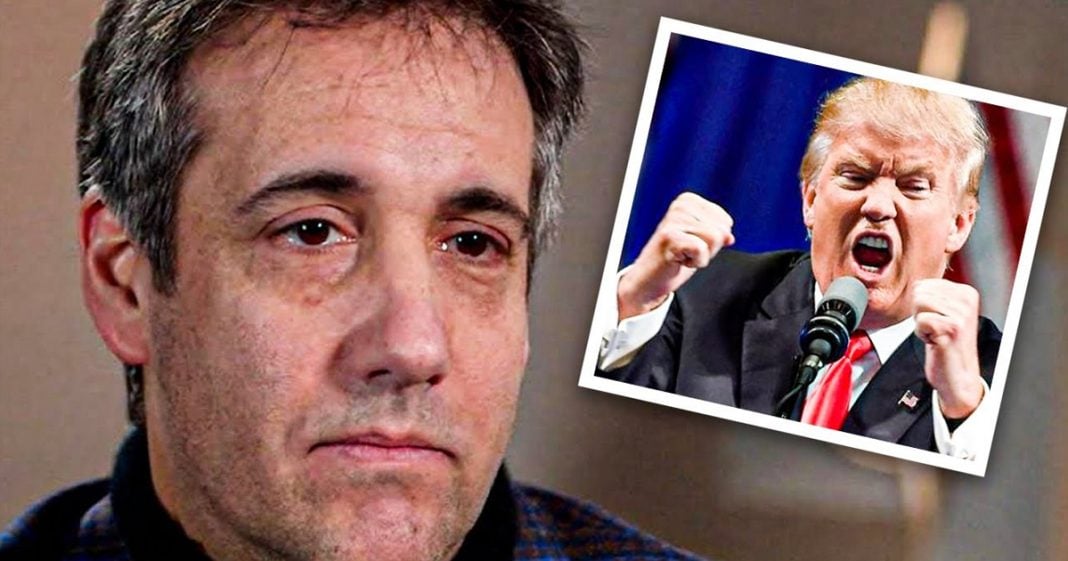 Donald Trump’s longtime lawyer and fixer Michael Cohen is about to unleash a flurry of disgusting and damning new information about the President in a new book, according to officials who are familiar with the materials. Here’s the big question though: Why should anyone care? None of the “bombshells” from other books have resulted in anything bad happening to the President, and this Cohen book will be no different. Ring of Fire’s Farron Cousins takes no joy in bursting everyone’s bubble about this.

According to a 10 day Trump administration, alumni, Anthony Scaramucci, and an interview with MSNBC this past weekend. According to him, Michael Cohen’s new book is not only going to spill all the beans about Donald Trump, but it is absolutely going to blow you away with all of the revelations that it’s going to make. Uh, we have seen little teases here and there over the last few days about what it may contain, you know, like maybe more pee tape, maybe, you know, other horrible things about Donald Trump. And then Scaramucci comes out and says like, Oh my God, you know, this it’s totally going to destroy this presidency. And to all of that, I, I have to offer one comment. And my one comment about this as a big old giant, who cares, I’m sorry. Maybe it’s the five months that I’ve spent a pretty much trapped in my house.

Getting a little agitated, a little angry. Uh, maybe it’s just because I’m tired of seeing these headlines like this every couple of months, since the man came into office like, Oh God, this is the end. Oh, this is going to do a man. Oh my God, this whole folks enough enough. And I know by the way that we at times also fell into that trap because yeah, it certainly seemed like the only thing that’s going to take this guy down is voting him out of office. Um, and even that is starting to seem like maybe that’s not even going to do it.

So let’s stop, Not stop trying to vote him out of office. Let’s keep doing, doing that. But with these idiotic headlines like this, and unfortunately this one actually came from raw story. The headline was, people are going to be shocked. Ex white house official hints. Cohen is about to supply more dirt on Trump. So what I’m sure Cohen does have dirt. I’m not trying to downplay what Cohen has to offer. I am sure Cohen does have evidence of criminal activity. He is already told the house of representatives that he does the investigators in New York believe that Cohen does. And I am positive that if evidence of criminal activity exists, Michael Cohen is one of the few people who would in fact have access to it and knowledge of it. And he is likely revealing that in his book. But does that matter one bit with regards to Donald Trump? Is that actually going to get people to vote against him?

No. Michael not. Michael John Bolton laid out evidence of criminal activity in his book. It did. Did Trump get indicted for that? Mary Trump, his niece just laid out evidence that the dude is a hardcore racist. Did that him kicked out of office. We have had some of the greatest mental health professionals alive in the country today. Explicitly tell us that the president is suffering from a mental illness into their book. The dangerous case of Donald J. Trump. Did that get him out of office? No. Am I saying that you shouldn’t read these books? Absolutely not. You should. The dangerous case of Donald Trump is a phenomenal book. I love it. Get two different versions of it.

Let’s stop overreacting to news like this. I mean, after all folks, this country still voted for the man. Of course, more people voted for Hillary, but still millions of people voted for Donald Trump. After the access Hollywood tape came out, that would have ended anybody else’s career forever. I don’t care what your career was. Not even just politics. Anybody. If you were on tape saying that and your employer heard it, you’re gone. Not this dude. He truly is Teflon Don. And that’s infuriating, by the way, it pisses me off because this dude has been embroiled in so many scandals that any one of them, any one of them would have ended the average politician’s career. But now he’s just like, yeah, what are you going to do? And then the public’s like, well, I guess, I guess nothing. He actually called our bluff. He called Congress’s bluff.

He challenged all the norms by saying like, yeah, I’m not going away. What are you gonna reiterate it? Yeah. And the answer is, we’re going to vote him out. It’s 100% on us. A book is not going to do it. A book is not going to change the public’s perception of him. They already hate him. What are they going to double hate him? No, let’s stop thinking that these people who came to fame and fortune by working for Donald Trump are going to be the ones to take him down. They’re still out there looking for their next paycheck. Wondering where their next meal tickets gonna come from. This is it for Michael Cohen. Scaramucci has found a great, a job being a never Trumper. Now liberal media has welcomed him with open arms. The guy’s a scumbag by the way, MSNBC should be ashamed for bringing them on, but this isn’t going to take down the Trump administration. What’s going to do that. Is you voting against him in November?