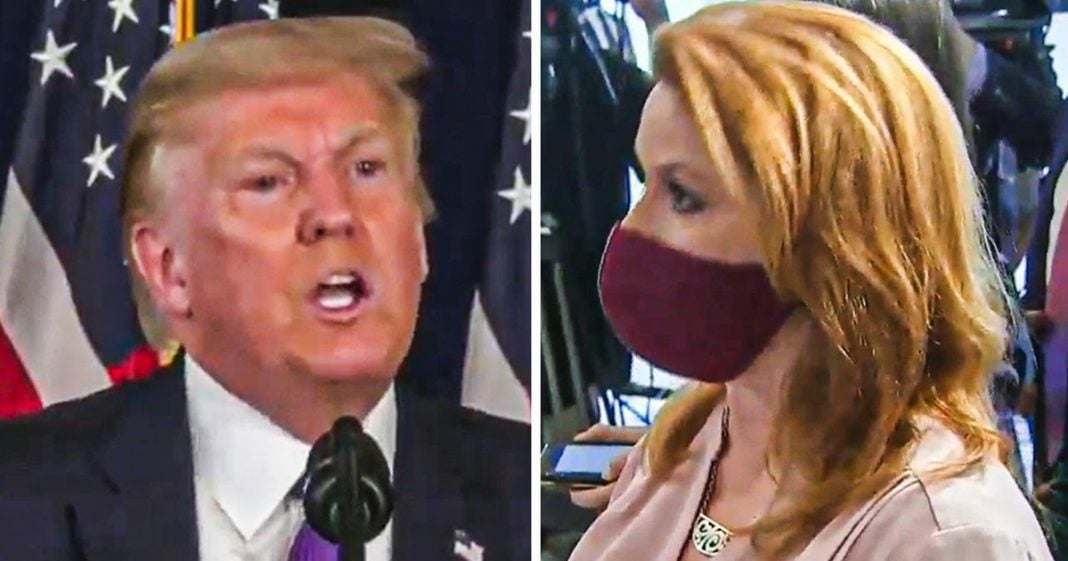 Donald Trump was pressed about the overtly racist and blatantly false rumors that his administration has been pushing about Kamala Harris, and after he repeatedly refused to own up to it, he ended up snapping at the reporter and telling them “don’t tell me what I know.” The President is feeling cornered, and that is when he is most vulnerable, as Ring of Fire’s Farron Cousins explains.

Over the weekend. Donald Trump decided to hold a little press conference at his, uh, Bedminster club in New Jersey. And one of the reporters there took the opportunity to ask Donald Trump about the, uh, let’s call it what it is, the racist birtherism that Republicans are now engaging in with regards to Joe Biden’s vice presidential pick Kamala Harris. We have seen it evolve over the last week or so. Uh, the fact that you have Republicans out there trying to argue much like they did with Barack Obama, that Kamala is not in fact, a natural born citizen. Uh, there was something wonky they’re claiming with her parents’ immigration status when she was born. And so therefore she obviously cannot serve as vice president because she does not meet the criteria to serve. As president Trump was asked about this because let’s face it. He likes to push these kinds of things. And, uh, he got testy with the reporter who kept pressing him on this because Republicans are the ones pushing it. Uh, here is the exchange that took place on Saturday,

If she’s got a problem, you would have thought that she would have been vetted. You would have thought that you would have been vetted by sleepy, Joe. Yeah, go ahead. So obviously the part that really stands out about that is when Trump’s snaps and is like, don’t tell me what I know. Don’t tell me what I know. Here’s what we know though, man. Uh, both you and by the way, your wife, uh, first lady, Melania, Trump, both actively engaged in the birtherism during the Barack Obama administration. Even long after he had in fact released his birth certificate, which some Republicans claim never ever happened. It did it’s available. He proved it, proved it repeatedly, but here’s the thing. This is why they’re pushing these same attacks. You know, what do, what do Harris and Barack Obama have in common?

Anybody, anybody want to venture a guess on that? Let me, let me just, uh, put it, you know, the, the most basic way I can say they don’t look like me, do they know different, different skin tone, right? And therefore in the eyes of these Republicans, that somehow makes them illegitimate Americans. That’s why these attacks are out there. That’s why Donald Trump likes to push them because Donald Trump is a racist. He is, we have seen it throughout his entire campaign. We have seen it throughout his administration. According to those closest to him, they’ve seen it throughout most of his entire life. It may not be overt and it may not even be the kind of racism to where he can’t stand to be around people of color after all he appointed Ben Carson to his administration, right?

That doesn’t mean he’s not still racist. And yeah, he’s out there pushing this, just like he pushed the Obama birtherism issue. This is what happens by the way, when you can attack somebody on the substance, you attack their appearance, you create these fake scandals, whatever you can do to drive somebody down into the ground without actually having to have a real argument. Sure. There’s plenty of things. There’s plenty of things. He could go after common before, except he really couldn’t because the, the, the bad pockmarks on a common, those record are all because she went a little too conservative. So it’d be a little weird to have a conservative attack her for that. But that’s what we’re seeing right now with all of this Camila was born in the United States. Camila is in fact qualified. She meets the criteria to serve as president of the United States in anyone else who says otherwise is pushing a racist birther narrative.