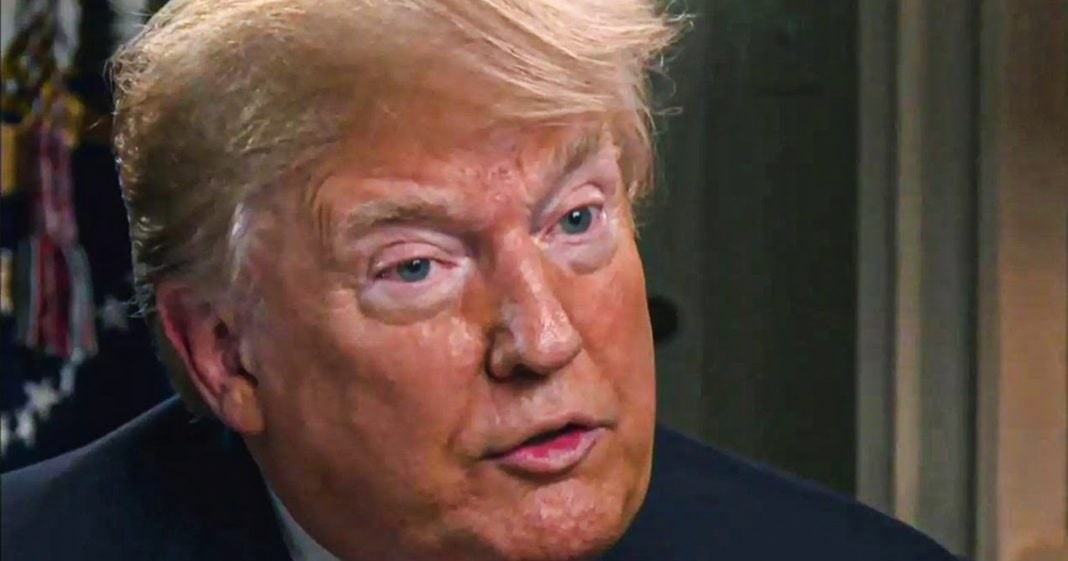 During an interview with Fox Business host Maria Bartiromo last week, Donald Trump mentioned that if Attorney General William Barr doesn’t prosecute Trump’s political enemies, then history will either forget about Barr or look upon him with unkind eyes in the future. Barr has already sealed his fate as to how history is going to look at him, but Trump’s comments also gave up the game to the public about what is happening behind the scenes at the DOJ. Ring of Fire’s Farron Cousins discusses this.

Last week, Donald Trump did an interview on Fox business channel with host Maria Bartiromo. And, uh, during that very long interview, there was a piece of it that actually was a little bit overlooked, uh, for many, many days now because Trump said some really horrid things during that interview. Uh, but to me, this one that again, had gone overlooked. This one kind of stands out as giving up the game as to what Donald Trump and his department of justice are up to right now. And here’s what it is. Donald Trump explicitly said that if William Barr attorney general of the United States does not prosecute Donald Trump’s political enemies, then history is not going to remember him. And if they do remember him, they’re not going to remember him. Fondly here are the exact quotes from Donald Trump. I hope Durham is doing a great job and I hope they’re not going to be as politically correct.

And I hope they do watch because the fact is this was president Obama knew everything, and vice-president Biden as dumb as he may be. He knew everything and everybody else knew everything. And, uh, they spied before and after I want to, I hope they’re not going to be politically correct and say, well, you know, we want to go, let’s get the lower guys who forged the documents going into Pfizer. Let’s just get a couple of the lower guys. Bill Barr can go down as the greatest attorney general in the history of our country, or he can go down as an average guy. It depends on what’s going to happen. Uh, so the Durham, by the way that Trump was referring to in the beginning of that quote is John Durham, the U S attorney for Connecticut who, uh, William Barr appointed to investigate the investigators who launched eventually the Russia probe.

And of course the Pfizer warrant into Carter page. Now it’s true. Last week, you did have an FBI agent who announced that they were going to plead guilty to allegedly forging documents with regards to getting that Pfizer and Republicans, right. Wing outlets. Like they took this as like, Oh, we don’t, you, they forged the documents. This dude’s gonna admit it. Oh my God. Yeah, Russia gate. It was all okay. Do you know what the guy is actually pleading guilty to? Because he changed the document to omit that Carter page at one point was an FBI informant.

That’s it? That is one thing, a hundred percent. It not only that he submitted the forged document to the court, he also submitted did the original where it did say that Carter page was an FBI informant in the past. He submitted both. I honest to God granted, I’m not a lawyer. I still can’t understand what is illegal about it. That, or why that’s even a big deal because he submitted both. He submitted both. So where’s the pro plum. How is that even a thing? But I love the fact that Republicans clearly can’t read because they’re celebrating this as if it shows that the whole thing was a lie and a hoax. No, it shows absolutely nothing. And let’s be honest folks. There’s actually someone on the left who have also been touting this as proof that the Russia thing was a hoax. I’ve never been a huge Russia Gator myself, by the way, as you can tell from our videos over the last few years, but, uh, this revelation of this FBI guy pleading guilty, this means absolutely Dick.

Okay. So let’s keep that in mind as we move forward. What is, I think rather important here though, is that Donald Trump just admitted why he appointed William Barr, his attorney general to begin with, he wants his political enemies punished. He wants Obama punished. He wants Biden punished and bill BARR who recently testified before Congress said that, no, no, no, listen, folks. We’re not going to, we’re not going to do anything crazy before election day. Uh, this investigation is going to be continuing through the election. We’re not going to, you know, come out with any kind of surprises or any, you know, we will hold the results, you know, and then he told buck Sexton a right wing, uh, not porn star, even with that name, uh, this past weekend that, uh, you know, we might release some stuff before the election, you know, we’re trying to get some things.

It’s what Barr said. So they’re already planning to use this trumped up, uh, you know, no pun intended B S investigation to damage Obama and Biden and the Democrats. This is going to be their October surprise, whether it’s accurate or not kind of like the FBI guy from last week, Republicans will jump all over it, hype it as, Oh my God, this is the proof. And it’s gotta to be a whole bunch of things, nothing, but they’ll control the narrative. And more than likely it’s going to serve its purpose of convincing people that somehow all of this with some ploy to go after Trump.