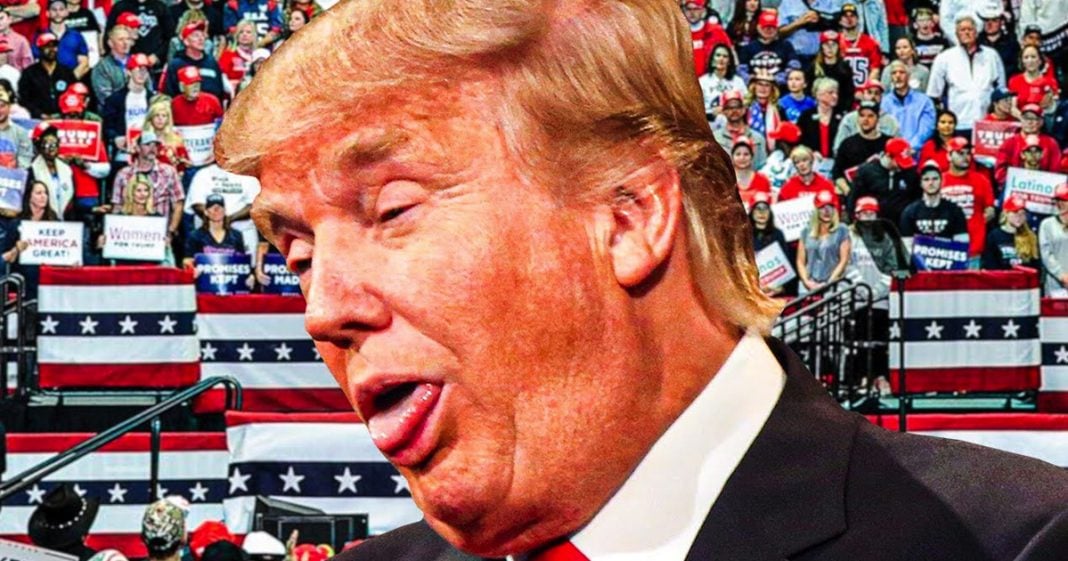 The presidential nominee for a political party has typically always been featured on the closing night, with the rest of the week building up to that grand event. This is part of the “showmanship” of these campaigns. But Trump has all the subtlety of a drunken elephant, and he has made the Republican Party bow to his ego and they will now be featuring Trump every single night of their convention. Ring of Fire’s Farron Cousins discusses this.

Well, even though the democratic convention is kicking off this week, the Republican convention is the one that is currently stealing headlines. And obviously one of the reasons they’re sealing headlines at the moment is because they’re going to do a lot of the events at federal buildings, uh, which means they’re most likely going to run a foul of federal law, specifically the hatch act, which prevents any federal employee from engaging in overtly partisan political behavior, which is exactly what would happen if any of the federal employees at these federal buildings, uh, participate in the Republican convention, even though it’s happening at their workplace, uh, violation of federal law. But there’s another reason why the Republican convention has kind of a, you know, capturing headlines right now before the democratic convention. And that is because the Republicans have been forced to kind of retailer what their convention is going to be about.

Not just because they have to do a digitally, but because they’re dealing with a, a egomaniac at the top of the ticket, you know, they’ve got to play to his narcissism. So they’ve revamped the Republican convention. And, uh, now every single night of this four night event is going to strictly be about how awesome Donald Trump is. Every night. If you tune into this event, all you’re going to hear is a parade of high profile Republicans, including the president’s children, of course, telling you how Donald Trump has made your life better. How this country that we’re in right now is a totally, super crazy awesome because of Donald Trump, no problems at all. Economy’s kicking ass, right? Uh, it’s not like we’re in the middle of a global pandemic. Uh, it’s not like we have civil unrest. Nope. None of that. You’re just going to hear about how great things are today and how it’s all because of what Donald Trump has done.

Uh, let’s be clear. Most of what is happening right now in this country is because of what Donald Trump has done. Let’s, let’s give credit where it’s due, but none of those things are good. The trade war that is still going on. I know it’s kind of hard to pay attention to that because we do have obviously a much more pressing issues happening the trade war. Uh, there’s no end in sight talks collapsed over a month ago, over a month ago, Peter Navarro, uh Trump’s trade advisor admitted that himself. He said, yeah, we were back to square one. We don’t know where we’re going to go with us because we can’t come up with a deal. So that’s a thing that probably won’t get mentioned. They’ll probably say like, it’s been tough on China. Trump’s the toughest he’s much tougher than Biden would be Biden. Probably wouldn’t be this ridiculous with a trade war that is costing us jobs in an already weak economic setting.

Then of course we have the response to the pandemic, which the Trump administration actually seems to think they’re doing a good job on, uh, that’ll probably be featured as one of Trump’s triumphs that we’re going to hear about at this convention. But here’s the problem with this. Not only does this prove that the entire Republican party has transformed itself into a cult of personality surrounding Donald Trump, it also undermines the entire point of the convention. This whole thing is really supposed to be a bit of a circus and you don’t bring out your best circus act, right at the beginning. You know, you don’t lead with your strongest act and then everything else after that is just kind of like, it gets boring. You got to have a little bit of showmanship. You have to build to that grand event. You know, that’s why every story follows the same kind of format that you learn about in high school.

The climax is like almost right there at the end, then right after the climax is the resolution, then the end. But at that climax, that’s what the convention is about. That’s why the nominee always speaks on the last night and every night prior to that, it’s the buildup, right? The anticipation, the excitement you hear about the party, you hear about the other people in the party, you hear about your plans, your ideas what’s going to happen in who is the person who’s going to make all this happen. Oh my God, here they come on. Night. Number four, blah. Not the Republicans. Nope, totally. Just going to be every single night. Look at Donald Trump, look at how great he is. If everybody could just get on your knees, you know, worship him a little bit. It doesn’t have to be too much, but if you could just do it a little bit every few times a day, uh, that’s going to be okay for the Republican party because that is 100% what Donald Trump has forced them to turn into and believe it or not, didn’t even take a lot of coercion from Trump has self, uh, to make them become this disgusting.