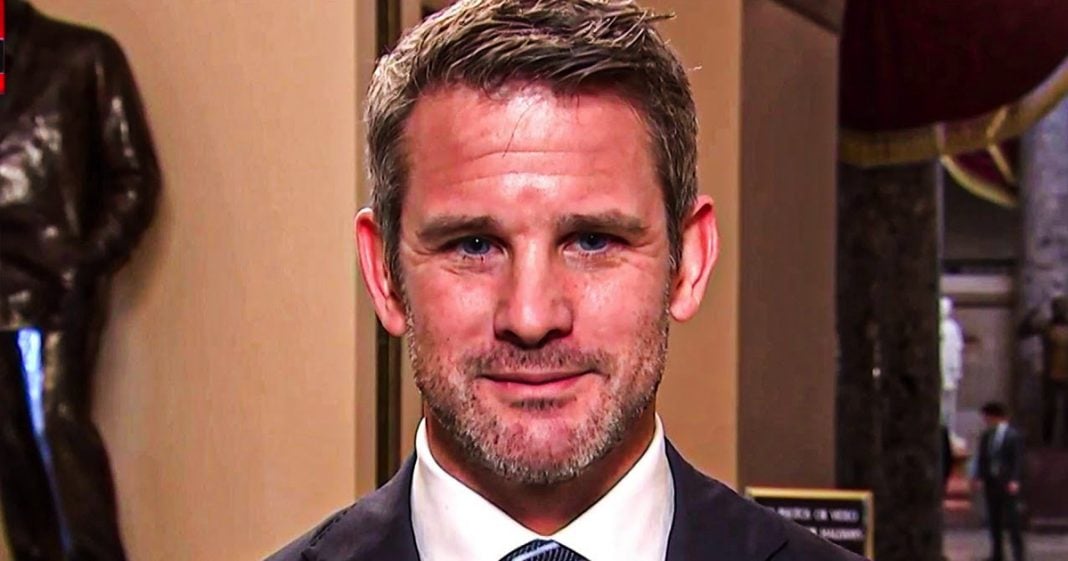 Republican Representative Adam Kinzinger is tired of being seen as the Party of wackos, and he wants his fellow Republicans to disavow the Qanon movement – and disavow any Republican who is actively spreading their insane lies. This is in response to a Republican Qanon candidate winning their primary recently, effectively bringing the Q movement into the mainstream of the GOP. Ring of Fire’s Farron Cousins explains what’s happening.

A Republican member of the United States house of representatives is begging his party to finally disavow the Q and non conspiracy theorists that he says have now become mainstream within the Republican party, obviously referring to the primary victory of a Georgia Republican, Marjorie Taylor green, who is an avid Q Anon conspiracy theory pusher, and who is most likely set to become the first Q Anon supporter elected to Congress. Uh, right now she’s only won her primary, but it’s a deep red district. Uh, she stands very little chance of losing the general election. She’s essentially made it in and representative Adam Kinzinger says we have to stand up right now, Republicans and say, no, no, we don’t support the craziness. No, we don’t embrace the lunatics. This is mainstream now. And we got to do something before that kind of takes over. Uh, he made comments to this effect in a YouTube video posted over the weekend.

Then he did an appearance on CNN where he said the following on Sunday. He said, uh, I think, uh, up to maybe about a week ago, there wasn’t a reason to denounce it because it didn’t need the attention. Yeah, you’re wrong about that. Uh, but now that it’s made mainstream, we have a candidate that embraces it, that won a primary. I supported her primary opponent. The president hasn’t fully denounced it or denounced it at all. Now it’s time for leaders to come out and denounce it. Um, true. True. I mean, most of what you said was true. Obviously the part I said, wasn’t true. That was not true. You should have come out long time ago. Here’s the deal though, bud? How is the Q Anon uh, overall grand conspiracy, which is that Donald Trump is somehow fighting this invisible war against a so-called deep state ring. That includes from Congress, uh, Hollywood, uh, academics. How is that conspiracy any different than a Donald Trump coming out the other day and saying, if you will like Joe Biden, he’s gonna, he’s gonna hurt God.

Yeah, that’s mainstream, but it’s not necessarily Q and non, but it’s just as crazy. How about all the Republicans who came out Ted Cruz included that said the green new deal is going to ban cows. Everybody has to become a vegan or vegetarian. That’s the liberal agenda. That is just as crazy as saying there’s a cabal of pedophiles running the country. It really truly is folks. And as I have repeatedly said, like that’s how this Q and non think that’s why that’s why he was allowed to flourish in the Republican party because the Republican party believe it or not has been pushing these ridiculous conspiracy theories about Democrats for decades. Democrats want to kill all the babies. So we got to go bomb the abortion clinics. They want to force you to get abortions. They’re going to come door to door and take your guns. They’re going to come and take your SUV.

They’re going to make SUVs illegal with their fuel emission standards. They’re going to force you to go vegan. They’re going to ban the eating of cows because of the methane. They think cow farts are causing climate change. Any one of those things sound familiar. And every one of them sounds just as, as crazy as the Q Anon pedophile conspiracy. Right? Well, those things that I just said, where are all things that have been said by prominent Republican politicians over the last 20 years, death panels birtherism, the Republican party is a conspiracy theory party. Oh, Q Anon is mainstream now. Great. They can fit in with all of the other conspiracy theories that the Republican party has been pushing for years. Where are you on that one, Adam? Kinzinger why aren’t you calling for them to denounce these? Oh, I get it because those are accepted conspiracy theories in the Republican party, but the Q Anon stuff, the, the, the cabal of pedophiles that is somehow over the top. Now let’s just go run our campaign, saying the Democrats are going to ban cow farts after of course they come and take your guns in your SUV, away from you.