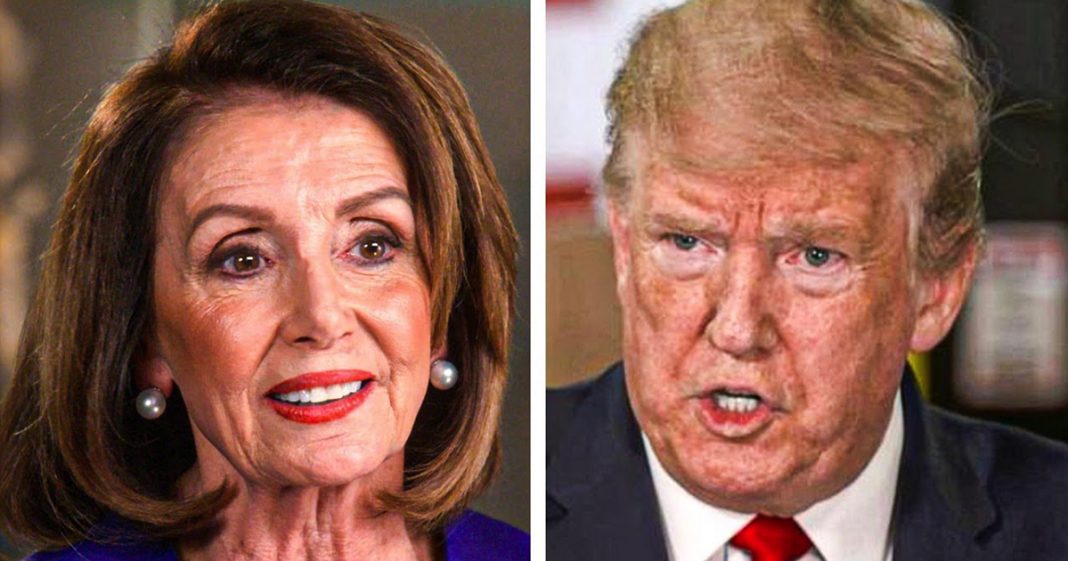 The Democratic leadership of the House of Representatives has called the body back from their month-long recess to address the crisis that Trump has created with the post office, and that is about the only good thing they’ve done so far. Rather than subpoenaing Louis DeJoy, they have instead REQUESTED that he come and answer questions next week. They have muscle, they just don’t even know how to use it at this point. This isn’t a time for civility, and Democrats are already playing from behind. Ring of Fire’s Farron Cousins discusses this.

After a couple of days of kind of kicking the idea back and forth, making phone calls to a prominent Democrats in the house of representatives, the democratic leadership in the house, uh, led by of course, house speaker, Nancy Pelosi has decided to end their month long vacation, which just started a few days ago so that they can bring everybody back to DC and hold hearings on the destruction of the union. I did States post office. That is about the extent of the good decisions that the Democrats have had regarding this. Let me make 100% clear. The Democrats absolutely should have called everybody back light. Like they are to come back for these hearings where they’re going to call postmaster general Louis D joy in there to ask him these tough question that absolutely should have happened. And I applaud the Democrats for doing it. They made the right decision.

So now let’s get into all the wrong decisions that they made because there are plenty, uh, first and foremost, the fact that they’re just requesting that mr. DeJoy come and testify. They’re not subpoenaing him. They’re not saying it’s mandatory they’re just asking politely will you, will you please come? And you want to come and testify with this? I mean, you know, we’re gonna, we’re going to grill you pretty hard, but it’d be really cool. If you could come. The reason this pisses me off and it should piss everybody off. Um, cause the Democrats have all the power right now. The Democrats have all the muscle and they’re either too stupid to flex it. Or they legit have forgotten how to flex it because it’s been so long since they’ve had to flex it. They have all of the authority. There is no reason to play nice whatsoever.

There is no reason to be timid here. You’ve seen what’s happening. You know, we have, by now seen every one of us seen the pictures of them, literally putting the big locks over postal boxes. So you can’t even put mail in. And that’s in the areas where they’re actually leaving the boxes. We’ve all seen the video footage and then coming and ripping that shit out of the ground and loaded it into trucks and sending it to rot in a field. We have heard the stories of them taking the mail, sorting equipment out of the post office. We have heard the horror stories coming out of the people who work in the post office saying this is worse than anything they’ve ever seen in their decades of working there. And you’re not even going to subpoena this, MFer to come and testify. You just, I was to say, we hope if it’s not too inconvenient for you, if you could come and testify before us, that’d be awesome.

Subpoena him because what’s going, going to happen is if he declines to come, then you’re going to issue a subpoena. And then when he declined the subpoena, then you have to take it to court. Why not cut out that first step, go ahead and issue the subpoena. And before he even has the chance to not show up, go ahead and get the courts to enforce it. Did you know, they can do that because they can. That’s the muscle that the Democrats should be flexing. Don’t try to this play. Nice bull crap. The second thing that is beyond infuriating, they’ve set the hearing for next Monday. So that’s cool. So they got a week to prepare it. That’s good, but they said they want to do it Monday because they don’t want it to interfere with the Republican convention. Right. That’s what they said. They don’t want it to interfere with the Republican convention. Oh God forbid we inconvenience these lunatics. Right. Let’s be nice to them because they would totally do that for you guys. And I’m not saying that just cause like, Oh, we got a stoop to their level. Cause I’m sure the people are going to comment that you know what? Yeah we do.

How, how has, uh, you know, Playing nice, worked out for Democrats for the last, I don’t know, 20 years how’s that worked out the country better for it. We have everything we ever needed because of it. We enacted policies that actually help American citizens. Cause we played nice with these assets. No, I would like to see. And maybe this is just how petty I am. But that’s what happens when you’ve been doing this for a decade and a half. You get a little grizzled. You get a little tired of seeing the same crap play itself out day after day after day. But I would like to see the Democrats come out and say, Hey Republicans, guess what? Not only we do in these hearings with Louie to join next week, we’re going to do them in prime time, in the evening at the same time as your convention, because why not? We can, what are you going to do about it? Republicans are already planning by the way on releasing the results of this DOJ investigation into Obama and Biden prior to the election bill Barr’s already has said that in an interview with [inaudible]

A couple of days ago, so Ready playing dirty. You can play dirty too. I promise you. It’s okay to get a little dirty every now and then you don’t have to stick to the, when they go low, we go high. You could do. Instead when they go low, we kick them while they’re down. Maybe that sounds a little dirty, but guess what? Time to get dirty time to get angry. We’ve seen what they’re doing to the post office. We know why they’re doing this to the post office. Louis did joy himself is not only doing it to save Donald Trump from being kicked out of office, but he’s doing it because he’s making a ton of money off of it as well. No matter which way you slice it. These are massive conflicts of interest. This man should be subpoenaed. If he refuses to comply with a subpoena, you send the Sergeant at arms, you lock them in the little locked room that you have and you have the authority to do that until he agrees to come and immediately testify. That is actually

How that works. By the way. Folks, If you ignore a congressional subpoena, uh, Congress does have the authority to send the Sergeant at arms out to arrest you. Then they do take you. Um, they don’t have the same kind of like prison type cell that they used to back in the day, unfortunately, but they do have an area where they have the legal authority to lock you until you agree to immediately testify. Then they unlock the door. They bring you out and they bring you straight to Congress where you testify. If you do not again, they have the legal authority. They take you back to the little room. They lock you in and you stay there until you say, okay, I’m a play. Nice. I’m gonna come out and testify. Democrats have that muscle. They do. They have this authority. There is no reason why they should be coming at these hearings to essentially protect us from fascism by already given up like, Oh, well, if you want to come, you can come.

If not, I guess we’ll take you to court who and say like, Oh gosh, darn it. We don’t want to step on any Republican toes by, by messing up your convention. And the convention bounce that the Trump will, Trump will get from this. So, Oh gosh, I hope this isn’t too inconvenient for you to hell with up, make it inconvenient, make it painful, make it hurt because what they’re doing to this country right now, it hurts. Americans are hurting. Americans are suffering and we have suffered a weak democratic party for far too long. We want to see a party that has some backbone in it. We want to see a party that’s willing to fight back. We want to see a party that every now and then, not all the time, but every now and then is willing to get down there in the mud with Republicans and beat them at their own game.

That’s what we want to see. But right now we’re not seeing it out of the democratic party that we have Washington DC. Again, I applaud them. I am for ending their month long vacation. That by the way, they didn’t even earn in the first place. I’m glad they’re coming back and they’re doing their job trying to save this country. I just wish they were a little bit more aggressive of when they were trying to save us from full blown fascism. Maybe that’s just me. But I think that’s the kind of thing where maybe you need to take the gloves off to protect the future of this country.