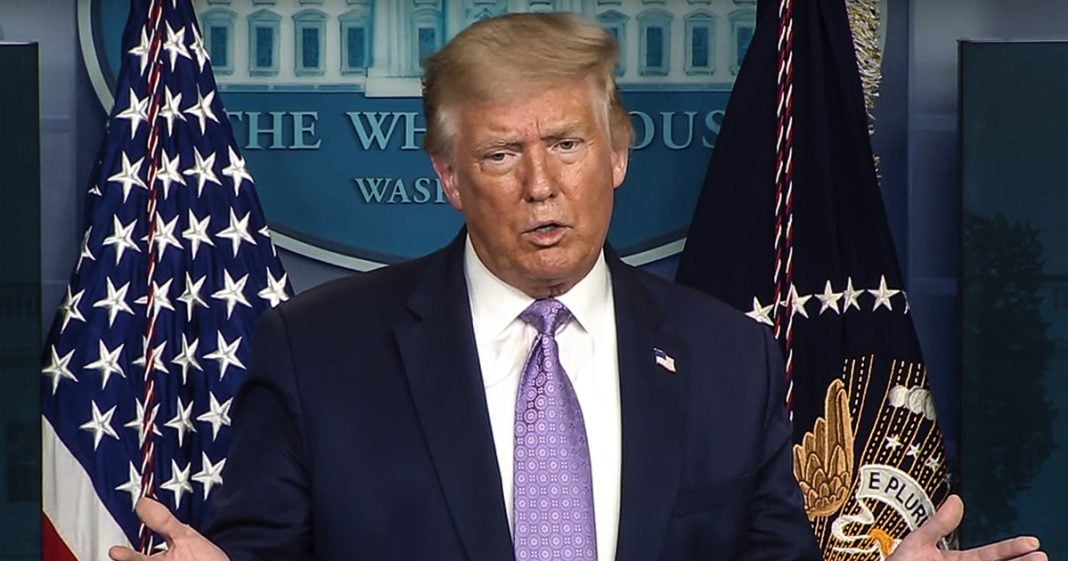 A Super PAC aligned with Donald Trump – America First Action – has decided that there just isn’t enough good news out there about Trump, so they went ahead and created a pro-Trump news website to spread nonsense that makes the President look better. The truth is that the President would have plenty of positive press if he wasn’t such a failure, that’s just the way it is. Ring of Fire’s Farron Cousins discusses this.

A pro Donald Trump super pack called America. First has apparently launched a new website called the American Herald. And the American Harold is a website that markets itself as quota, uh, a conservative news platform designed to bring you all the news, the liberal media doesn’t want you to know, and they do at the bottom of their website on each page, make it clear that this is paid for by a pro Donald Trump super pack, but here’s the problem while it is totally okay for a super pack to go out there and create their own website, they can use their money any way they want because our election laws are ridiculous. Um, what they can’t do is actually coordinate with a presidential campaign and unfortunately for the American Herald and America first, uh, it really, really looks like they are coordinating directly with the Trump campaign. And according to reports what’s happening is that, uh, the American Herald is, uh, promoting a lot of things, initiatives of the white house at the same time that the white house is promoting them as well.

And the messaging between the two, dang it pretty, pretty close to identical and not to mention the fact that the, uh, America first, uh, America first policies, uh, the separate arm of that super pack, considering the fact that that is run by a lot of people who’ve been within the Trump administration and still have very close connections to both the administration and the campaign starting to raise a lot of eyebrows, right. But here’s the thing nobody’s going to get in trouble for this. Even if they are illegally coordinating with the Trump campaign, nobody’s going to get in trouble. So while it’s fun to see stories like this and think, Oh man, looks like they’re breaking the law again. It doesn’t matter if they are, if they aren’t, it wouldn’t matter if this was a Democrat or Republican thing, nobody ever gets in trouble for this crap anymore. They should, but they don’t. So here is the thing I want to talk about. Trump is glad that this exists. He shares stories from them too, because they’re putting out pro Trump stories. They’re soothing his very fragile ego every day. Um, this is funny on Tuesday of this past week, this is according to article and truth out. Um, the top stories on Harold’s homepage included democratic cities overrun by left wing mobs. Trump gives aid to jobless restless borrowers Democrats refuse to condemn Antifa president Trump’s executive orders put America first.

This is right wing propaganda. pro-Trump propaganda at its finest being paid for by wealthy Republican donors who are contributing money to this super pack. People are getting paid to write this crap. Like that’s, that’s pretty remarkable. Uh, but again, the whole point of this, the entire point of this is that the Republicans have such a fragile little man, baby serving the white house that they have to spend money massaging his ego. And yeah, maybe it is illegal because again, as this report points out, there’s a lot of things that are a little too similar coming out of both the Trump campaign and the American Herald. And it sure as hell looks like the two are working together on this. Great investigate it and then be like, Oh, there’s wrongdoing. And we wish there wasn’t because nobody’s ever going to do anything about it. Cause y’all, don’t do anything about it. Um, what gets me and always will is the fact that the president of the United States is so thin skinned that in order to make him happy his own party, the millionaires who give money to this ridiculous super pack are totally cool with most of it going to massaging his gentle little ego so he can sleep better at night.