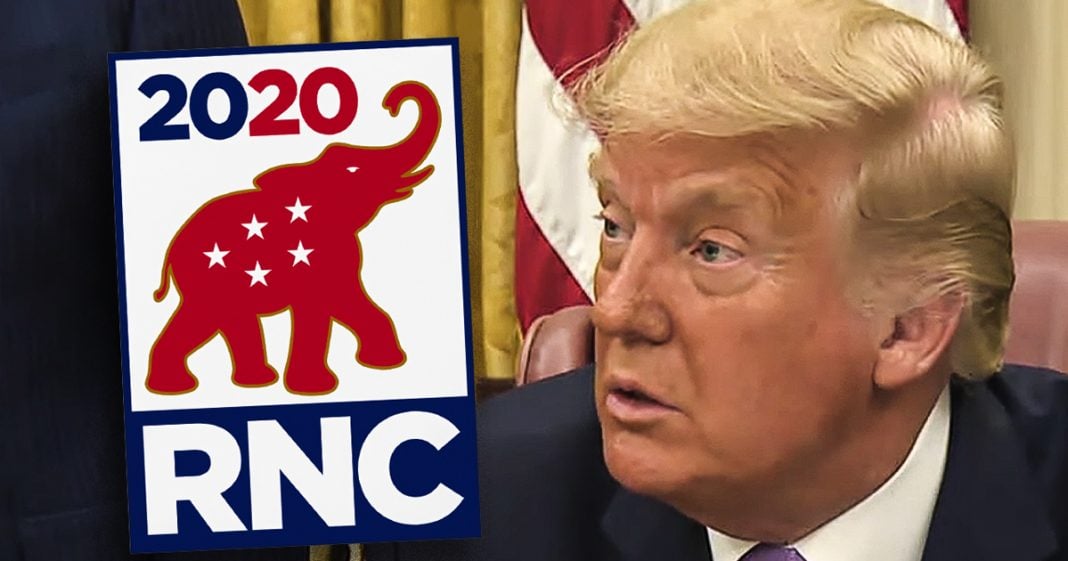 Even though the Republican Convention is going digital, there will still be enough “live” events happening in Washington, D.C. to ensure that people show up. That’s why the President’s campaign strategically planned to hold these live events in areas that are adjacent to his D.C. hotel. This will help to corral people into his business, therefore lining the pockets of the President while also spending the week praising him. Ring of Fire’s Farron Cousins explains what’s happening.

Even though the Republicans are not doing a necessarily an in person convention anymore. Donald Trump and his, his family have still found a way to profit off of the, uh, mostly digital convention that they’re going to be doing while they’re still going to be holding the quote main event in Raleigh, North Carolina. They’re also going to be hosting a lot of smaller in person events in Washington, DC. Most of which are actually going to happen in a federal buildings in Washington, D C and G know what all these little federal buildings have in common. They’re all very strategically located around Trump international hotel in Washington, DC. And according to a Democrats in Washington, D C, this, this isn’t a coincidence. You see, they did this because it kind of guarantees that all the people who come in town for these events, which it’s not going to be your average everyday run of the mill, Donald Trump bumper sticker person, it’s mostly going to be donors.

Um, other lawmakers, I guess maybe, you know, at the state level, coming into town for this, the delegates, uh, they wanted to make it, you know, kind of corral them geographically into the Trump hotel right there in Washington DC. And by doing that, obviously they’re going to put lots of money into the pockets of everyone who gets money from the Trump organization, which would be Donald and his kids. Because why, why do anything? Why do anything at all? If you’re not going to profit from it, right. Trump family. Cause that’s what you’re all about. That’s what this is about. That’s why this is happening. If you can make a quick buck off it, why not do it folks? This is one of the most important reasons why Donald, why Ivanka, why the other two kids, even though they’re not a part of this administration, uh, they need to actually be totally separated. They shouldn’t even be allowed to go out and campaign for it. Um, Trump and Ivanka hymns, uh, should have divested and the other two trumps should not ever go out there and act as surrogates for the campaign or the administration, which they do all the time on, on Fox and out there and speeches. There’s no separation is what I’m trying to say between the Trump family, the Trump business and the Trump administration. They’re all three one in the same.

And that’s the problem. The president is using tax dollars to put more money in his pocket. He’s using them the money of donors to the Republican party to put more, more money in his pockets. He is duping all of these ridiculous little Republicans all over the country, in the pudding, more money in his pockets. And while those things I don’t necessarily have a problem with, I do have a problem with the misuse of tax dollars. I do have a problem with my tax dollars going into his pockets. So while Republicans might go out there every three months and say, look, he donated a hundred thousand dollars. His quarterly salary to this government department will fantastic. He can donate his salary every single quarter for the entirety of his administration. And it’s still not gonna recoup any, really any of the money, the more than $100 million that he has spent in taxpayer money, just playing golf. Okay. So promote that. If it makes you feel better at the end of the day, this entire administration up to and including the upcoming GOP convention has been nothing but one long term grift on the American people.