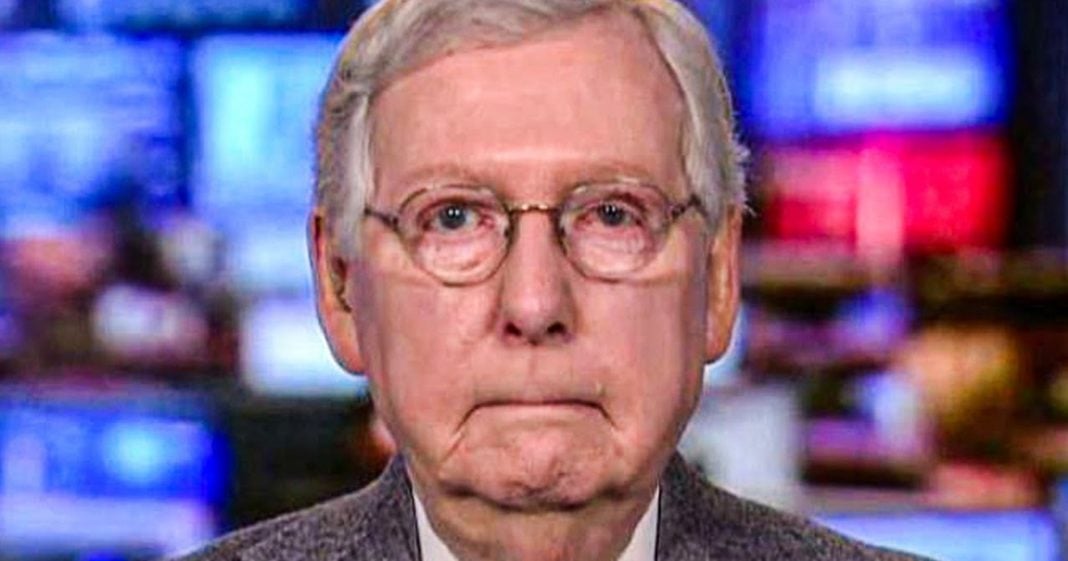 Republicans in the Senate, lead by Mitch McConnell, are refusing to create a new Coronavirus Relief Package that includes aid to the states to combat the disease and keep their economies running. As a result, economists predict that we could see a sudden and intense shrinking of state economies and rising unemployment rates across the country, all because of this move by Mitch McConnell. Ring of Fire’s Farron Cousins explains what’s happening.

Senate Republicans led by Mitch McConnell have made it 100% crystal clear that they are not going to include aid to States in any forthcoming Corona virus relief package. And the reason for this is because they’ve said that they do not want any package. They put together to be a show called blue state bail out because obviously the narrative Republicans are trying to push is that blue States were so unprepared. They were so horrible with their response, that whatever happened to them economically, they probably deserved it. This by the way, is not based in reality because what we’re seeing happen right now is that red States are getting hit even harder. And their economies were far more fragile than those of blue States. So it’s actually the red States that are getting screwed over the most from Mitch. McConnell’s a decision here. It’s actually not funny.

Um, and you know what else? Isn’t funny. The fact that Moody’s came out with an analysis this week, showing that Mitch McConnell’s decision to not provide aid to States here in the United States is going to result in, at least, at least being the keyword there a 3% overall shrinking of the U S economy and at least 4 million jobs lost. Okay. All 100% because of Mitch McConnell’s decision. So Mitch McConnell to put it another way is about to be single handedly responsible for causing a massive recession here in the United States, because he doesn’t want to help blue state gov honor’s little turtle man is so willing to hurt Democrats, that he is actually willing to be the one to flush the toilet with the economy inside of it. That’s what Mitch McConnell is doing. He’s laid this giant turd of an economy, and now he’s, he’s waving it goodbye.

All hurt all 50 of you just to hurt. One of you. Mitch McConnell says this while not criminal, by any stretch of the imagination. I think we can either go with sociopathic or full-blown psychotic. Mitch McConnell is with this decision folks where we’re going to hit a recession, a massive recession bigger than what we’re seeing right now because of Mitch. McConnell’s singular decision here. This is on him. So I hope that these 4 million people, or maybe even more, when you lose your job, Mitch McConnell cost you your job. When the economy shrinks by 3%, just remember if you have retirement funds out there, those are also kinda shrink. Uh, Mitch McConnell took that money from you. That’s what this means. That’s what the analysts are telling us. And that is what Mitch McConnell is proud to be doing to this country.