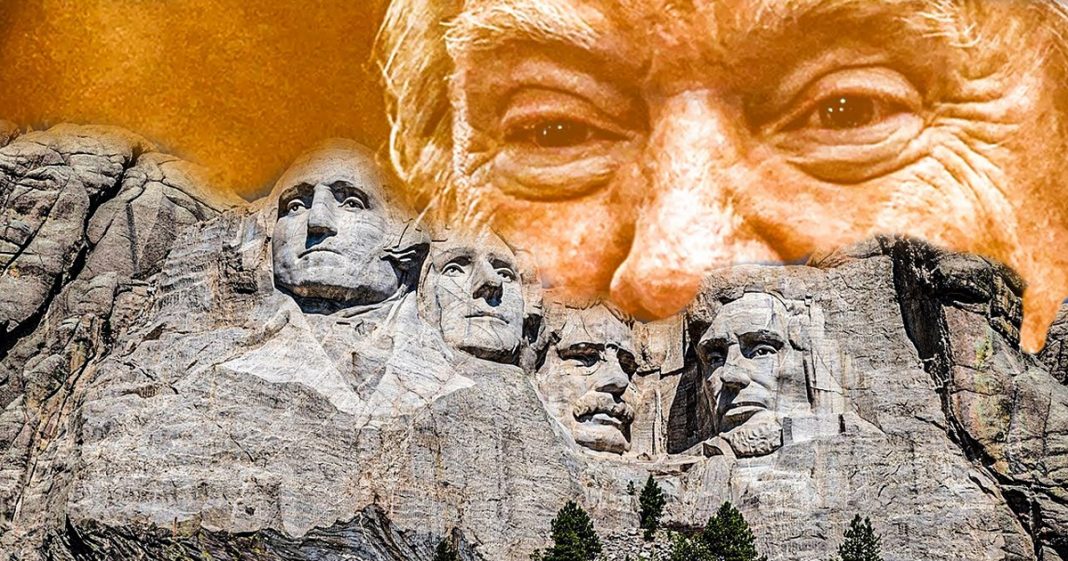 Donald Trump has apparently been obsessed with getting his ugly mug carved in stone, and his aides actually went as far as asking the governor of South Dakota what it would take to make that a reality. Yes, according to reports, the Trump administration has actually inquired about getting his face carved into Mount Rushmore. Ring of Fire’s Farron Cousins explains what’s happening and why it will almost certainly never happen.

According to a recent report in the New York times, Donald Trump wants one thing, apparently more than other things in this country, and it’s not more money he’s got, he’s got plenty of that. He keeps making it, but the thing Donald Trump wants even more than reelection probably is to get his big dumb face on Mount Rushmore. That apparently is something that he has talked about repeatedly with his aides so much. So that about a year ago, one of his aides actually reached out to South Dakota, governor Christie Nome to ask what it would take to get Trump’s big, ugly mug up there on Mount Rushmore. What a horrifying thought, right? Donald Trump’s face carved in stone, just looking at yeah. All over the country, but that is what he wants. And to kind of bolster the fact that this is a thing Trump wants, uh, the summer when Trump went to Mount Rushmore for his 4th of July spectacular, uh, the governor presented him with a forefoot replica of Mount Rushmore that happened to contain his face.

So he got his wish, you know, to, uh, to a smaller extent, not quite the big grand one that he wants, but you know, baby steps, baby steps. This man is not well. This man is absolutely 100% not well in a terrifying way, because here’s the problem that, that he has here. And this, this is what drives me insane because this isn’t just about him. This is about pretty much any just ridiculously wealthy person in the United States. They think that having money in and of itself is a virtue that that alone is an accomplishment that warrants the admiration of everybody else in this country. That’s why Trump wants his face up there. When you look at the people on that mountain, you look back and you see accomplishments. You see people who changed the game. People who came along and forever change the way this country worked, not came up with a new product that revolutionized our way of life, not came up with a, you know, thing that made stuff better. They changed the fabric of the nation itself, the fabric of American politics. And they moved us forward in a way that accelerated our evolution as a country, no minor.

You know, we have had some other great presidents throughout the history of this country that do not have their faces up on Mount Rushmore. Never will because as good as they were as good as some of the policies were that they instituted still, wasn’t quite the revolutionary change that these other individuals brought, sorry, it’s just not, but a guy like Trump who has done absolutely nothing who relentlessly tweets out that he’s done more than anybody else that that’s categorically false, like verifiably. Those are things we can look up and we can see very quickly and easily that that’s not true, but he says it repeatedly and incessantly that he’s done more than anybody, except maybe occasionally on a good day, Lincoln, not true, but he’s done nothing to warrant having his big ass face on the side of a mountain. That’s not the kind of honor that they just hand out Willy nilly. You know, first you got to go find a, a mountain area to steal from native Americans. That’s not an easy task. We did it with Mount Rushmore, which is another sick, sick thing. This country’s done that you know, needs to be addressed someday, but regardless, he wants us to just love him and admire him and Revere him and almost worship him because he has money.

That’s sick. That’s the sick part. And the worst part is he is not the only multi-billionaire in this country. That believes there should be people devoted to him with a religious, like a mentality, just because they have money. And that’s the problem with this capitalistic system that we have today. It does tell us that we should worship money, that we should worship the people that have money. And as long as we do that, and as long as the pursuit of money is all that consumes us as a country, we will never be as great as those men who do grace. The side of Mount Rushmore had hoped this country would eventually become.