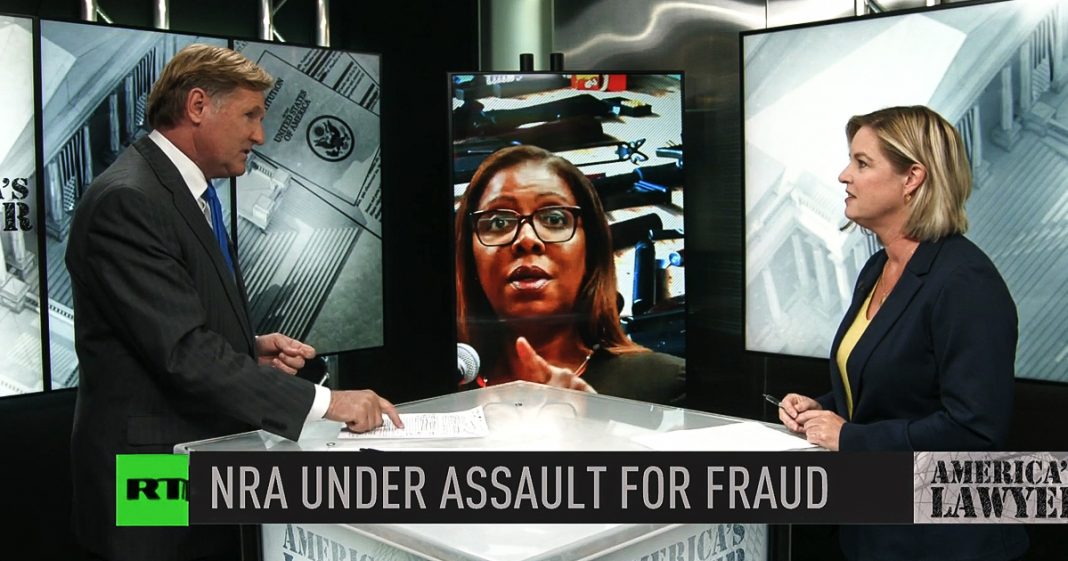 Mike Papantonio: Following an investigation that revealed the national rifle association is ripe with fraud, New York’s attorney general is now seeking to completely dissolve the organization as a whole. Legal journalist Mollye Barrows is with me now to talk about it. I took a look at this, it’s, it’s complicated in that she’s attacking their nonprofit status. Okay. If she succeeds, you understand what’s going to happen is they’re going to say well, okay. What about the Catholic church? Same deal.

Mike Papantonio: What about these hospitals that call themselves nonprofit?

Mike Papantonio: And there’s all kinds of hinky stuff going on. What about churches in general? You see.

Mike Papantonio: So, so the nonprofit issue is abused across the board.

Mike Papantonio: No question. So first of all, she’s got real problems with this case, but it’s a, it’s a creative place to begin. What’s your take?

Mollye Barrows: It’s interesting because she was successful in doing this with Trump university. She basically dissolved that organization when they wouldn’t come clean with how they were spending their money or they were misappropriating funds. So it looks like she’s trying to take the same angle here and this is just the latest in a long line of issues with the NRA. So maybe she’s attacking while there’s blood in the water. She’s not the only AG looking into them. You’ve got Washington, DC looking into them. You had the probe that the Senate looked into a year and a half, basically a year and a half probe that wrapped up last year. And they found, that was when they found the, you know, connections with the Russian operatives, if you will, or the nationals, Maria Buitoni and the other guy was Alexander something or another, but, at any rate, so they’ve had a long list of problems lately and legal issues as well of costing like a hundred million dollars. There was a secret recording that was leaked. So I think maybe she just sees an opportunity to take down one of the most powerful lobby groups that has kept States from being able to pass gun control laws that are significant in any way, shape or form.

Mike Papantonio: Okay. So the, the, the complaints in her complaint is that there, there’s signs of plane flights that were done, jets being used for.

Mike Papantonio: For, for executives.

Mollye Barrows: Misappropriation of money. Not, not filing properly, how they were spending their money and.

Mike Papantonio: Private trip, trip to Africa that was unexplained. I think you, you had the, the CEO’s $17 million to, to, to the CEO saying $17 million is what I want to put aside for my exit package.

Mollye Barrows: Right. He didn’t even get it approved by the board, Wayne LaPierre.

Mike Papantonio: Okay. Now here’s what’s so startling about this. If you take these same facts and you apply them to a lot of nonprofits, you’re going to find the same result. So the question then becomes, is this the new, is this the new lawsuit? Is this the, is this what finally is used to go after the Catholic church where they’re spending gazillion dollars because of abuse of children.

Mike Papantonio: You know, here’s, here’s what I find interesting about this. The Republicans are loving this.

Mike Papantonio: Did you know that?

Mollye Barrows: It gives them a lots of fodder.

Mike Papantonio: Yeah. Ann Richards, was a governor of Texas ran against Bush and when, when the smoke cleared and Bush beat her, overwhelmingly the thing that brought the folks out to vote against Ann Richards was, was the gun issue.

Mike Papantonio: And that’s what the GOP is counting on with this. And I think they’ve even talked to Letitia James and said, look, can’t you wait? Can’t you wait till after the election?

Mollye Barrows: Not to give fodder.

Mollye Barrows: Right. No, I think you’re exactly right. I mean, the NRA has already responded with a very, with its own lawsuit, basically saying you’re violating our freedom of speech. And, and Donald Trump is, has jumped on the bandwagon as well, and basically called it, you know, government control of our God given gun rights. But I didn’t know God gave us gun rights, but that’s the kind of language they like to use. At any rate, I think that’s essentially where this is going. It is going to open the door for a lot of political folks to say, hey, it’s a, it’s a dog whistle, if you will. Our gun rights are being violated.

Mike Papantonio: Okay. This is being done, this is the other GOP talking point that I’m already seeing. It is we’re in a time when their, we’re, you know, you got Democrats trying to defund the police. Their, their argument. This is not me telling.

Mike Papantonio: This is not me. It’s Law and order, the argument coming from the GOP is the Democrat cities. You know, whether it’s.

Mike Papantonio: Whether it’s Portland or Seattle or Chicago, it’s chaos, it’s crazy. New York, they’re leaving the city and she’s bringing this during a time that’s just going to add more to that argument. They, they’ve really tried to discourage her timing wise.

Mollye Barrows: From doing it.

Mollye Barrows: Well, I think you bring up some great points. I mean, personally, I’d like to see the NRA lose some of its teeth. I do think we have some much needed gun control regulation that doesn’t interfere with people’s second amendment rights. And if this is a way to get to that end goal, I approve of it, but you’re right. We only have a couple more months till we have an important election. And if this is going to be used as fodder to distract people away from the real issues that matter, that’s a damn shame.

Mike Papantonio: Well, she’s getting a lot of publicity, but it’s not helping the election.

Mike Papantonio: Mollye, thank you for joining me. Okay.