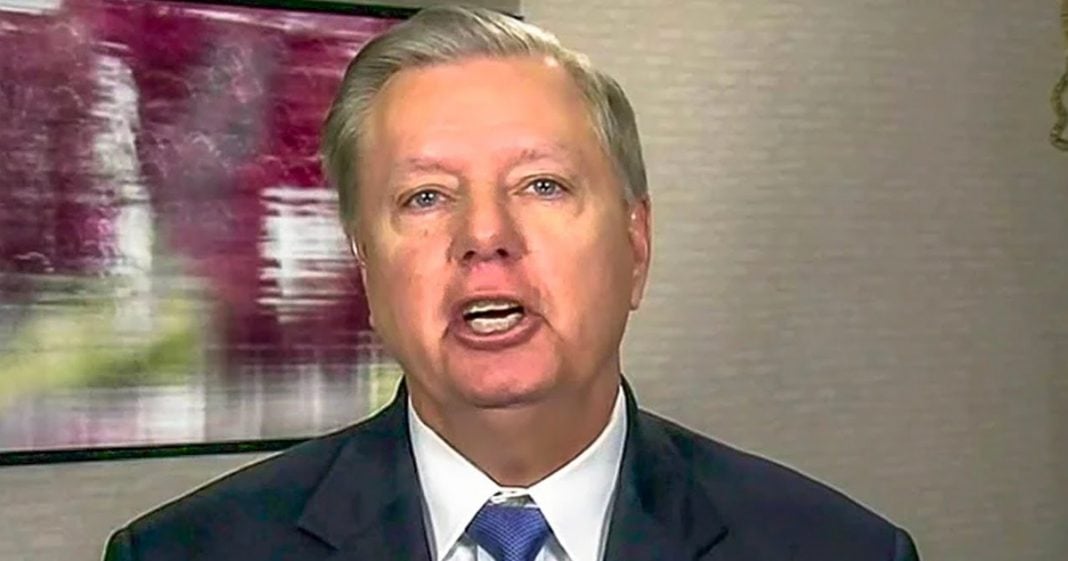 Lindsey Graham is facing a tough path to reelection this year, and its all because of his devotion to Trump. Voters in South Carolina have been willing to overlook decades of inaction and incompetence from Graham, but his newfound loyalty to Donald Trump is apparently too much for them to take. Could enough of these voters turn on the 30-year incumbent to cost him his career? We can only hope, as Ring of Fire’s Farron Cousins explains.

Republican Senator Lindsey Graham is facing right now, an uphill battle to keep the Senate seat that he has held for several decades and long before he held that Senate seat, he actually served in the house of representatives representing the state of South Carolina. So Lindsey Graham has essentially been representing South Carolina in Washington, DC for a little over 30 years, but his three plus decades, long career could be coming to an end for one reason. And that reason, according to Republican voters in South Carolina is his undying loyalty to Donald Trump. Here’s what’s happening right now. Uh, experts are predicting that in South Carolina, in order for Lindsey Graham to lose what has to happen is that either Donald Trump has to lose the state of South Carolina in the presidential election, which is a very real possibility now, uh, and that would precipitate a Lindsey Graham loss or Trump voters would have to show up and vote for Trump in the presidential, but not vote for Graham in the Senate.

Now that particular scenario seems incredibly unlikely, right? We’re not going to see a bunch of Trump supporters show up and either not vote for Lindsey Graham or just skip over the Senate part altogether. That makes no sense. What makes more sense though, is that Biden wins South Carolina because more Democrats show up and therefore the down-ballot Democrats do much better and it’s not going to take much right now that race in South Carolina is neck and neck. Uh, Harrison Graham’s opponent is out raising him for the last few months. Okay. This is not a long shot. This is not a pipe dream. It’s so likely Lindsey Graham is going to keep his seat, but it is certainly not a given for Graham and the Republicans. And let’s also rewind. Joe Biden was not doing very well at all in the democratic primary until what happened. South Carolina, South Carolina came out in full force for Joe Biden and effectively turned his campaign around South Carolina likes Joe Biden.

That’s not good for Donald Trump and Lindsey Graham, but again, it’s the voters themselves. It’s not the expert. Predictions is not the polls. It’s the voters themselves that have recently been giving interviews saying I’m just not okay with how Lindsey Graham is. I’m not okay with the way he goes along with whatever president Trump says. I want somebody who’s going to think for himself. And I don’t know that that’s Lindsay Graham. These are things that voters are telling the pollsters they’re telling the media. And these are all Republican voters. People who have voted for Lindsey Graham many times in the past, but they finally hit the point where enough is enough, which is really interesting. Considering the fact that Lindsey Graham has done virtually nothing for the state of South Carolina, God, 10, 20 years, maybe what has he done for South Carolina? What has he done to help you out?

What has he done to make the state better? What has he done to show the country that you’re a leader in anything? And the answer is nothing. He has failed the people of South Carolina, but they were okay with the failure until of course he decided to just blindly hitch his wagon to Donald Trump. Now he’s embracing the things that these people say they cannot go along with, you know, Donald Trump’s blatant racism. Lindsay Graham might not be saying these things, but by not speaking out against Trump, he is going along with them. He’s complacent in them, complicit. Excuse me, all of these other horrible things. The president has done. You know, the response to the pandemic, the Senate, holding up legislation, not allowing more aid to go to people. They’re pissed about that in South Carolina, as they are all over the country. Here’s the thing we have to be wary of though.

We have to think back to a Ted Cruz and Beto O’Rourke really seem like Beto was gonna take that seed away from Ted Cruz because Ted Cruz at the time was the least the popular Ted Cruz was the most hated Senator in the United States. You had money flowing into that race from all 50 States to support Beto because everybody hated Ted Cruz, Ted Cruz still won because even though the rest of the country hated Ted, there were still plenty of people in Texas who liked him. We could be looking at a similar situation like that in South Carolina, because we have seen generally speaking across the country. People don’t like Lindsey Graham, but South Carolina is different. And I think that’s what a lot of people tend to forget here, especially in these areas in the South. It’s not all, you know, rednecks out there with their Confederate flags and their Trump. Trump flags,

Sometimes quiet people who never say a word about politics, but deep down, they know that they are as red as the Republican party will let them be. And it doesn’t matter who they’re voting for. If they have an R next to their name, that person gets their vote. And I know that because I’m down here in the deep South, I have been for 37 years. I’ve seen it. I see it every day. So it does give us a little bit more of a unique perspective. Being down here, embedded in this, it’s a perspective that people from other areas of the country don’t have on this Southern voters and why they keep choosing these horrible politicians. Just like I don’t have the same perspective on New York politics or California politics, but when it comes to stuff down here, yeah, there’s definitely my wheelhouse been here for a long time. Been covering it for a long time and I’m telling you, Lindsey Graham could easily still win this. He could still win this thing by 10 points, because even though some Republicans are willing to speak out against him now, I’m still willing to bet. There’s plenty of others who are holding their tongues, who are still planning on voting for him in November.