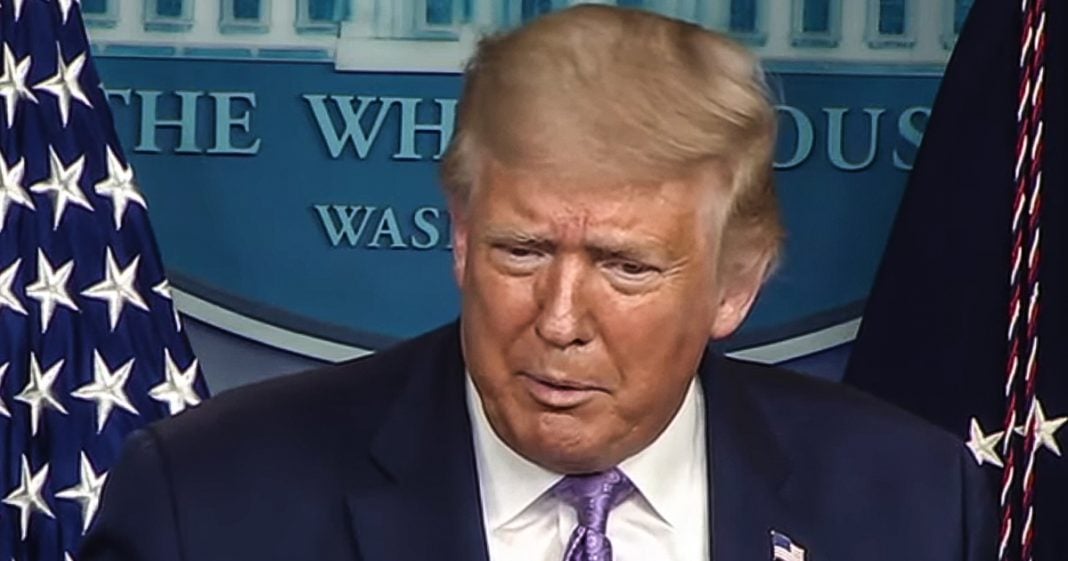 Donald Trump spent most of his day Thursday, prior to being publicly humiliated by a reporter, attacking powerful women who actually scare the daylights out of him. Women like Alexandria Ocasio-Cortez, Kamala Harris, and Nancy Pelosi were on the receiving end of the President’s verbal assaults on Thursday, but not a single one of them flinched – in fact, Cortez fired right back at Trump and effectively shut him up. Ring of Fire’s Farron Cousins discusses this.

Donald Trump spent his day, Thursday attacking powerful women who apparently scare the bejesus out of the president of the United States. Honestly, at this point, that is the only, the only reason why Donald Trump consistently reserve some of his harshest attacks against women. They scare him. They always have to be honest, any woman that the president can not force to bow down to him, scares him. He doesn’t like that. He is a very insecure individual. Here’s what happened yesterday. First of course, the attacks against Kamala Harris. He continued during his interview with Fox business host Maria. Bartiromo calling her a, essentially an angry black woman referring to her questioning of Brett Kavanaugh, where she actually made that dude cry. And Trump says very nasty veal, very angry woman. So trying to, uh, continue that angry black woman trope straight up going back to racism. Cause that’s what he does best then out of nowhere decides to go after representative Alexandria, Ocasio, Cortez. Um, here is what he had to say about her. Uh, AOC was a poor student. I won’t say where she went to school. It doesn’t matter. Cause you don’t know because you’re an asshole. Oh, an idiot. Sorry. I didn’t mean to say asshole, but you know what? If it fits, it fits. This is not even a smart person other than she’s got a good line of stuff.

But before I read the rest of your quote, what do, what do you mean? A good line of stuff? Are you referring to your own daughter? Did you get the two confused? Cause Ocasio, Cortez does not have a line of stuff. She doesn’t have a product line out. That’s not how she is. That’s not who she is. That’s not what she’s about. So what your daughter’s about. So I think you had a little Freudian slip there. Uh, but I agree, uh, your daughter, if we’re talking about her, she, she would probably fit the description of what you’re saying here anyway, to continue the quote. I mean, she goes out and she yaps these guys. They’re all afraid of her, your afraid of her. You brought her up for no reason out of nowhere. Oh. And then the most beautiful thing happened. She found out, she found out you were talking shit behind her back.

So she took to Twitter. She made it public. She made sure everybody knew and she responded and said, let’s make a deal. Mr. President, you release your college transcript. I’ll release mine. And we’ll see, who has the better? Who was the better student loser has to fund the post office? Yeah, he didn’t, uh, by the way, have a comeback for that. He, he left that go. Here’s the thing. Uh, she graduated Coombe loud from, I believe Boston university in 2011, she was an exceptional student. She did very well in school. I don’t know where this made up attack that he has against her as coming from. Unless he spends his time reading right-wing, uh, uh, websites that literally make stuff up and try to pass it off as news. But she is a smart individual, very smart. And she’s not afraid to release her grades or her transcripts.

You on the other hand have actually sued to stop people from releasing them. You forced your colleges to sign NDAs. When you decided to run for office, that’s how bad your grades are, bud. You had to hide them under threat of lawsuit and financial penalties. If somebody released them. Wow. I haven’t no doubt that you were a horrible student from what I have seen from you. Since you have been in the public eye, you, by the way are not an intelligent individual. You know how to manipulate people. Sure. You surround yourself with spineless. Yes. People to make you think you’re making all the right decisions, but all your bankruptcies, those speak volumes. The fact that you’re hiding your records, that speaks volumes moving onto the next attacks. It was not just Harris and AOC. He also leveled some tax and Nancy Pelosi calling her yesterday.

Stone cold, crazy Nancy Pelosi has many things. She’s a lot of things. I’m not a fan of, but stone cold, crazy. Ain’t one of them Polosi whether you love her or hate her is in fact a powerful woman. And at times she has been a very effective woman. She’s also been very ineffective at certain things. And that’s why I have problems with her. She has been willing to go with Republicans and not fight hard enough for the American people, but there is no denying that what she has accomplished in life is extraordinary. She does have an intense level of knowledge. She has a ton of power and she is a very intimidating figure. And that’s why Trump is going after her because he’s afraid of her. It wasn’t just politicians though. He also, for some reason, decided to lash out at Mika Brzezinski, from MSNBC, referring to her as Joe Scarborough’s ditzy, airhead wife, she also responded and she hit it on the head too.

She responded by saying, what’s your thing with women. You really have a lot of problems with women. Like you’re scared of them or something. I think this common thing has you completely strung out and she’s right. Trump always reserves his harshest attacks for women because in his mind he views women as weak. And when they do not fit into his preconceived notion of what a woman is weak, timid, mild to, uh, serve men. If they do not fit that mold that he’s created in his own brain, that they’re bad. They’re, they’re scary. I don’t know what to do. I’m going to attack them. I’m going to come out and I’m going to talk all this nonsense about them because I’m afraid. That’s what we’re seeing happen right here. Listen, Trump won in 2016 by convincing enough suburban Housewives as he calls them to vote for him.

He is now this year losing among women 61 to 38%. That is the advantage Joe Biden has with women and Joe Biden. Isn’t exactly the best with women. But Trump is so bad that he has managed to sink his own ship here. And every time he doubles down on one of these attacks, especially when he spends an entire day, I mean just all day long yesterday, attacking women when he does that, it turns off these motors, but that’s, that’s not even what this is about. Folks. This is about these unfair attacks against these women. He has revived birtherism against Kamala Harris, you know, all through the 2016 election. Uh, we were very critical of Hillary Clinton, uh, of her policies, of her past of statements that she has made. We were never critical of her for being a nasty woman. I actually agreed with her statement of the basket of deplorables I still do.

And I think the basket’s gotten a little bigger, never criticized her over Ben Gazi or anything stupid like that. So when Trump comes out with these ridiculous attacks on these people, you know, we would defend them. And we actually got accused by a lot of people being these pro Clinton people when we were also accused at the same time of a cost and Clinton, the election. But that’s the point. Substantive criticisms are perfectly acceptable, whether it’s a man, a woman doesn’t matter. If you have something of substance to criticize somebody for when they’re running for public office, go ahead. But this guy has nothing, nothing. And that’s why he results to these personal, ridiculous, fabricated attacks against these powerful women. He is frightened. He feels cornered and he is lashing out like an angry rabid animal. That fears it’s about to be put down.