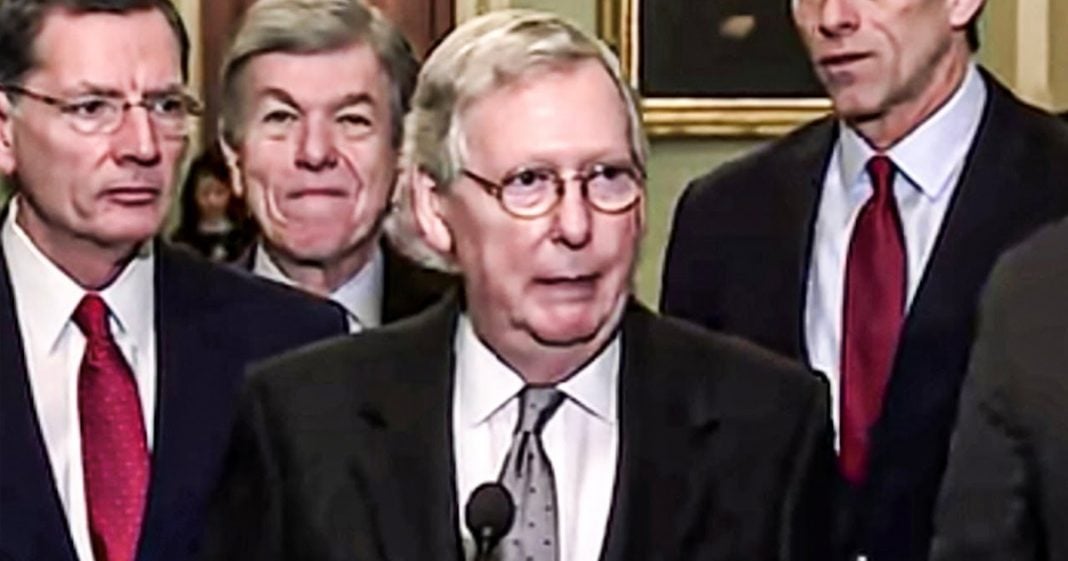 The rats in the Republican Party are finally beginning to eat one another as resources become more and more scarce. They have a pretty impressive war chest heading into November – about $100 million – but they are using most of that money to save 8 incumbent senators and leaving everyone else to fend for themselves. This would be a pyrrhic victory for the GOP, as they could easily win the battle but not before destroying their Party in the process. Ring of Fire’s Farron Cousins discusses this.

Just a couple months ago, a story came out about rats in several big cities in the United States. After all this was, you know, about a month into the shutdown and restaurants weren’t open, there was less human activity. Rats in major cities were starting to go hungry. And what the researchers found was that the rats, because there was no other food available, they would actually resort to cannibalism. In short, when there were short on resources, the rats just began to eat one another and we’re seeing the same thing, actually take place in the United States Senate, except instead of rats, we’re dealing with Republicans, which is far worse than rats. A dirtier filthier generally have fewer ethics than an actual rat, but nevertheless, we’re watching them metaphorically eat one another right now over the shortage of resources that they’re experiencing. And that shortage of resources is campaign cash. Because even though Republicans in the Senate have $100 million cash on hand to spend in the upcoming election, they have decided those at the top, the top rats King rats, they have decided that they’re going to spend nearly all of that money, just protecting eight, eight incumbent Republicans. Everybody else you’re essentially on your own. If your campaign can go out and raise money and get people directly donating to you. Fantastic. So be it,

You have not done come, uh, expecting any help from the Republican senatorial campaign committee because we have to protect these people. Some of those people include Kelly Loeffler from the state of Georgia. You remember her, the one who, uh, pretty much was caught red handed with all the insider trading and not punished poured whatsoever. Um, she’s in a lot of trouble down here in Georgia. Republicans didn’t think she would be, but now she is, this is supposed to be a solidly safe red seat. That suddenly is very flippable for Democrats. Especially when the Republicans put up somebody who very clearly broke the law and didn’t face any consequences for it. You know, as much as Republicans love that she didn’t go to jail yet. They understand that that is now a huge liability. The people do not like her. She is not popular. So they have to spend all the money there. They’re having to do it in other States as well, Alabama,

Doug Jones, the Democrat who, uh, took the Senate seat away from Roy Moore, after Moore’s horrendous a grotesque past, we’ll call it a resurface. So a Democrat one that Alabama Senate seat, that should be a given for Republicans too. It’s not. So Republicans are putting their money into it. The club for growth has actually put millions of dollars into an anti Doug Jones campaign. But here is what this really tells us. Cause again, they’re doing this with eight senators who are essentially getting almost all according to reports of the $100 million. This means that they are no longer planning or even attempting to pick up any democratic controlled seats. What they are hoping for at best is to maintain their slim majority in the Senate. That is the best case scenario for these Republicans. And that means that the Democrats have a golden opportunity here to do something amazing, do something worthwhile and do something transformational by getting these Republicans out of office.

Now Democrats already screwed the pooch. They backed Amy McGrath against Mitch McConnell. He now has a little under a 20 point lead over her Mitch McConnell. Ain’t going anywhere. He’s going back to the Senate. So good job there. Uh, don’t screw up anywhere else that maybe maybe stop backing these Republican lights. Amy McGrath, by the way, is a pro Trump Democrat, such a thing shouldn’t exist. There should be no such thing as a pro Trump Democrat. Yet here we are. That’s who the democratic party backed. It was a stupid decision. It’s a decision that’s going to haunt them. Don’t put any more money into that race because Mitch McConnell is having to put tens of millions of dollars into it. Let him blow his money, let him use that money so that it doesn’t go. And maybe go to a flippable blue seat where Republicans could pick it up.

There is some strategy here and Democrats have to understand that because they can win the white house. They can retain control of the house, but if they do not get control of the Senate, it’s going to be very tough for them to get anything at all done with their new a president. That Senate is so important and Republicans are terrified. That’s why they’re fighting so desperately to just maintain. Do you understand? Do you understand what that means? They’re not even trying to expand anymore. They’re not saying let’s go out and be aggressive. Let’s go out and get more power. These rats are saying I only have so much. If you try to take it, I’m gonna come at you. This is mine. This is mine. I have to save my seat. I am not going anywhere. I don’t care. We’re not going to bring in more rats.

We’re not going to have a super colony. We’re just trying to survive. They’re in survival mode folks. We’ve got them up against the wall, but it’s not because we did anything by the way. It’s because they were exposed the entirety of the Republican party, the failures of decades of no policy or bad policy finally came home to roost. And yeah, it took a horrific pandemic to wake the entire public up to it. But the public is more awake now than they have ever been. They see what happens when you push for decades of cut, burn slash kill, because that is what Republicans have done to the federal government. They have slashed the funding for necessary agencies. They have destroyed staff, reduce them down to nothing. And then when we finally do hit a situation where we need the government to function properly like a pandemic, it can’t, it can’t because of what Republicans did to it suddenly.

Okay. What about the help? Could you do something to help us then during this, you crippled the government, but you have a chance right now, Republicans to do something to fix it. Also, what are you going to do? And what did they do? They gave a trillion dollars to corporations. They gave you a one time check at 1200 bucks and they refuse to give you any other aid. They fought tooth and nail to make sure that you didn’t get extra unemployment benefits. And the public saw that too. And because of these things, these Republican rats in Washington, D C are up against a wall. They’re watching their resources, dwindle. They’re preparing to eat one another. They’re kicking some of the rats out of the colony saying we just don’t have room for you. And it’s 100% of their own making because the public, again, for the first time in my lifetime finally woke up, saw what Republican policies really do to the public and to the government. And they’re finally rightfully pissed off about it.