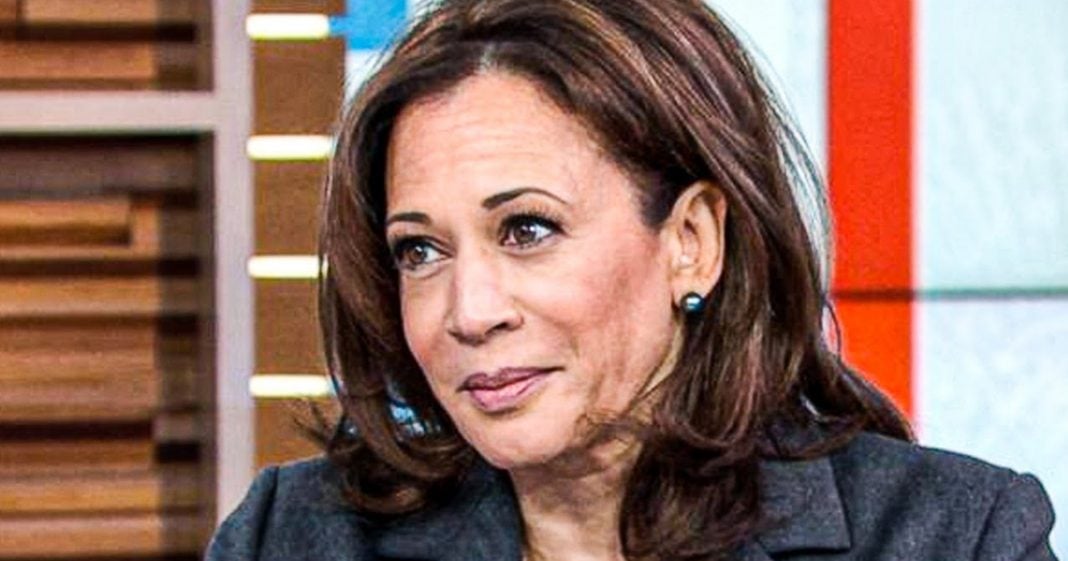 Kamala Harris has already delivered an amazingly fiery speech attacking Donald Trump, and she’s only been on the Democratic ticket for 48 hours. But this is actually a good reason why she is the best pick for Biden (even if she isn’t the best pick for the country.) Kamala is a great speaker, and that is what has been missing from Biden’s clumsy campaign, and she has already managed to shore up the weakest part of his campaign. Ring of Fire’s Farron Cousins discusses this.

So it’s been roughly what 48 hours give or take a couple hours since Joe Biden announced that Kamala Harris was going to be his running mate for 2020, and already, uh, she has kind of come along and shored up the biggest weakness of Biden’s campaign and the biggest weakness by the way of Joe Biden’s campaign was the fact that the man can’t speak in public. That’s kind of a detriment when your job involves public speaking and, you know, campaigning. And before anybody says, no, I’m not talking about the stutter. I’m talking about the fact that the man can not be trusted to go out there and deliver a decent speech. He simply cannot. Uh, that is why over the past few months, most of the time you see him do these interviews and make these little videos. His wife is right there with him. And a lot of times she’s done a lot of the talking.

Sometimes she’s done all of the talking, but Kamala has come along and kind of shaking things up in that regard. And that is a good thing for the Biden campaign, because while she may, uh, you know, be mired in neo-liberalism Kamala is, is an effective and powerful public speaker and choosing her as his vice president. As I said previously, I think that was the smartest decision for the campaign. Now, not saying that’s the best thing for America or that she was the best pick, uh, for the people, for the campaign itself. Yes, she was the best possible pick right now. She certainly was not who I would have wanted, but I am seeing the benefit of her already. And it’s only been two days. Uh, yesterday she came out with Biden, they did a joint thing together. They each gave a speech. His was very weak, uh, actually kind of meek.

He talked a lot about, you know, all of the morals and the family and all that. She came out guns blazing, just trash. Donald Trump, uh, said, here’s a quote from her and this is beautiful. I love it. I love it. Uh, when other countries are following the science, Trump push miracle cure, as he saw on Fox news, while the other countries were flattening the curve, he said the virus would just poof go away like a miracle. So when other countries opened back up for business, what did we do? We had to shut down again. This virus has impacted almost every country, but there’s a reason it has hit America worse than any other advanced nation. It’s because of Trump’s failure to take it seriously from the start. That’s what we’ve been saying this whole time too. She is 100% correct in her analysis here, but that is an attack, not just the word she used, but the way she spoke them, that I’m sorry, Joe Biden is physically incapable of doing now back in 2008, it was Joe Biden, who was the, uh, you know, kind of the attack dog, the, you know, big, rough and tumble guy chosen by Barack Obama.

The more reserved, you know, scholarly presidential candidate. This time, Biden’s got some years on him, right? It’s been 12 years since he was picked, as the VP nominate a nominee, he had to go with somebody who did what he wants did. And I think Kamala brings that to the ticket. I think this for him was a smart choice and I think she is going to be able to go out there and do what Joe Biden just can’t do anymore. And that is talk to the public. Talk to people, get people interested, get people excited. Joe Biden is had to be hidden away from the country for quite some time. And so far it’s served him well. Trump’s been shooting himself in the foot every possible.

The opportunity Joe Biden just had to kick back and relax and say, good job, bud. You just keep doing that. Well, that’s true. The she doesn’t work forever. So now Joe Biden actually does still get to kind of kick back a little bit because Kamala can go out there. Kamala can give this speech has Kamala can talk to the people. Kamala can get people energized for Joe Biden. She didn’t do a good job of it for herself during the primary, but that’s because there were, let’s be honest, much better candidates still out there while those folks are gone. But those folks are also going to be going out there for Joe Biden. He has a decent enough army now to go out there and campaign for him to where he can just sit back and relax, but putting common law on the ticket, I do believe shored up the weakest part of Joe Biden’s ticket, which just happens to be Joe Biden himself.