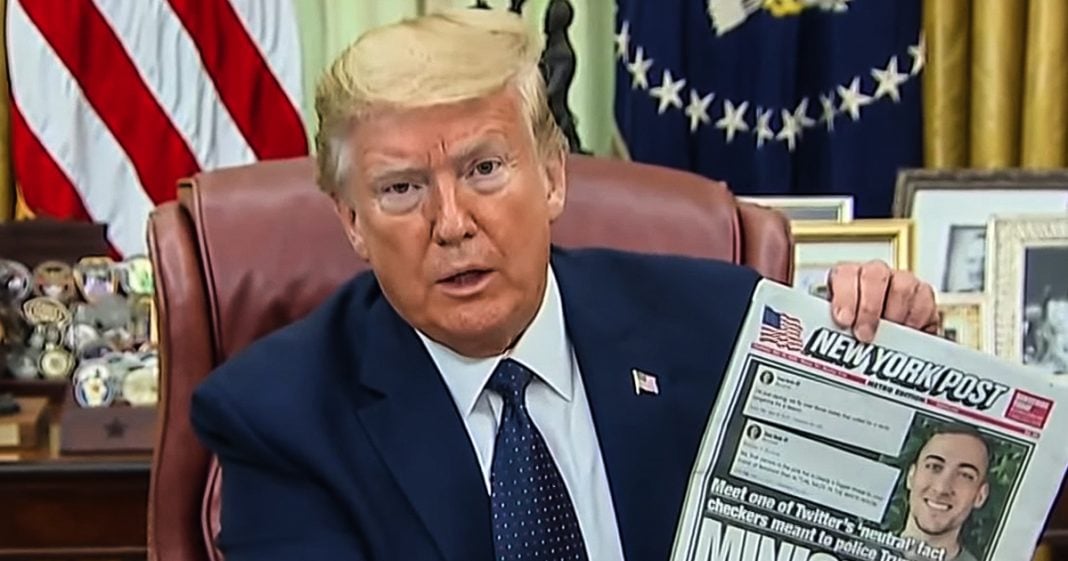 A Trump-appointed judge in Pennsylvania has apparently had enough of the lies coming from the President and the Republican Party, and he’s ordered them to provide evidence of widespread voter fraud in the state or forget about their pursuit to stop vote-by-mail in Pennsylvania. This is actually a very smart ruling by the judge because it doesn’t actually go one way or the other, just allows for the presentation of evidence or the immediate dismissal of the claims – and that’s how the court system is supposed to work. Ring of Fire’s Farron Cousins discusses this.

Donald Trump and the Republican party suffered a major legal setback this week when a federal judge in Pennsylvania, not just a federal judge, actually a Trump appointed judge in Pennsylvania effectively told Donald Trump his campaign, his administration, and the Republican party that they had to put up or shut up with regards to the so called a rampant voter fraud. That takes place vote by mail. Here’s what happen. The Trump administration slash campaign slash Republican party filed a lawsuit in the state of Pennsylvania to stop a universal vote by mail program in the state. Pennsylvania is obviously a swing state. It is very crucial, has a lot of electoral votes. It is a major step stone towards winning the white house. If you do not win Pennsylvania path to the white house gets a little bit tougher. It’s nice to have that one in your pocket. Republicans did not want more people in Pennsylvania to vote because they understand that’s going to benefit Democrats and hurt Republicans in the swing state.

They filed the lawsuit to stop the vote by mail under the guys of math. So voter fraud, that’s what they told the judge. They said, there’s too much massive voter fraud that takes place with vote by mail. You cannot do this. And the judge this week said you have until Friday to, to show us that this voter fraud exists. They have till today to show the judge and the, the democratic party who is the, uh, I guess defendant here. Uh, and the Sierra club is part of the defense. You haven’t told today, too. Handover, everything you got. Cause you say you have it, by the way. That’s the interesting part here. The Republican party, the Trump campaign, they say that they have all of the data and all of the evidence that shows that the voting fraud is totally real Pennsylvania. And in the past, when the defense has said, okay, cool.

Um, you need to present that evidence. Cause that’s how, that’s what you do in a case, the defense, they have to know what the evidence is. They have to be able to examine it. And the Republicans have said, no, you can’t, you can’t have it. We it’s totally real hundred percent real like will shock you blow your mind real, but you can’t see it even though legally you’re supposed to be allowed to, we’re not going to show it to you. They’re not going to show it because it doesn’t actually exist. And the judge understands that legal scholars from both the left and the right, understand that every study that’s looked into, it has found the same thing. And so the judge who again, was appointed by Donald Trump said, listen, if you have this evidence that you claim to have, you have until Friday to present it to me, to the democratic party, to everybody, show us what she got or stop making these claims.

Now, a hearing on this evidence, which will determine whether or not this case moves forward is scheduled for September. If the Republicans do not turn over that evidence today, they will have missed the deadline imposed by the judge. And it is likely that this case from Republicans will be thrown out. And at that point upon appeal, the most likely thing that would happen is that it could only be sent back down to lower courts, uh, because it would have been thrown out due to procedure, not due to, uh, uh, the ruling. So a higher court is not going to be able to just pick up the case, take it from there and go with it. It would have to go back down to the lower courts. So they’re screwed either. They have to manifest this evidence of widespread, massive voter fraud in Pennsylvania, or admit that they lied and give up their lawsuit.