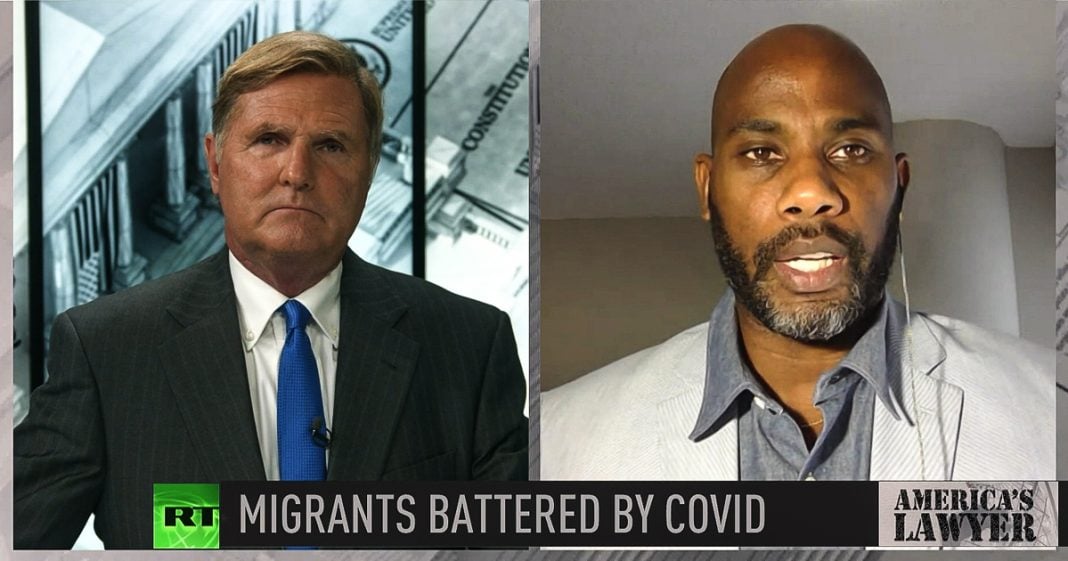 Via America’s Lawyer: Mike Papantonio is joined by immigration lawyer Allen Orr to discuss how the Coronavirus pandemic is weaponized against migrants and asylum seekers.

Mike Papantonio: As the Coronavirus rages across the country, one of the most vulnerable populations remains that of migrants who are wanting to seek asylum in the United States and they’re being detained in hotel rooms. They’re facing deportation due to the COVID concerns and thousands of migrants remain at the mercy of ICE agents during an especially dangerous time. Joining me to talk about this is Allen Orr, president elect of the American immigration lawyers association. Allen, I’ve had you on before you, you always nail this topic because you’re doing it every day and you have been doing it many, many years every day. We’ve been seeing news about migrants being separated from their families and kept in overcrowded detention centers for years now. Has the pandemic exacerbated that situation in what you’re observing?

Allen Orr: It actually just fueled the situation. It’s just given the administration another out to say why we don’t want these individuals here, but in fact, COVID is not unique to migrants. As we know that the US has a large number of people who have tested positive and there are deaths here. So it’s just another sort of tool the administration gets to use to use another power of the regulations to sort of prevent asylum seekers from coming into this country. If you sort of look and think about it, they’re only using this sort of tool at the Southern border, and until they start using it at all borders, all land ports, all airports it’s, it’s another social racist sort of policy mean to direct and hit those immigrants coming up from the other parts of South America.

Allen Orr: Right. So the first thing is humanitarian issues aren’t sort of judged on historical spectrum. So just because someone did something in the past, doesn’t mean that it’s legal today. So that’s not an out for any administration to basically say this has happened before, so we get to do it again. And there are tons of things in history that you can think of that would not be allowed under the constitution or international law. Second, yeah, there might have been small cases where individuals might have been in hotels, but these are individuals who are separated from their families and did not go before an immigration judge as required by the law. So what we’ve never seen in any administration before, although the president administration, Obama administration, was known as the deporter in chief as this sort of vagrant understanding of how immigration law works and evading the policies and the judicial rulings and procedures of what immigration requires to give these people who are applicants to the United States, their equal day in court, their due process.

So what this administration has done is basically decided to exclude people which takes them out of asylum process and return them home very promptly and they’re doing this through contractors. So the prisons, the detention centers themselves are private prisons, which are sort of just another fee that taxpayers are paying. And then once again, this sort of exclusion thing is done by contractors, which is another high fee that the American people are paying. So it’s really an expensive cost to sort of do these things. And that’s something that we’ve not seen before.

Mike Papantonio: Yeah. Allen, it’s, it’s been reported that federal officers are citing COVID concerns when they’re expelling asylum seekers. They’re basing it on, on public health, safety and welfare. Is that a concern? Is it legitimate or just an excuse to push people out quickly without any due process? What is your take on the COVID in regard to the argument, we got to move them through because they’re a threat to public safety? What’s your take?

Allen Orr: Well, it doesn’t really ring clear because that would be everybody’s coming through the border. So why is it that we’re letting truckers through, other applicants through with these applications, sports people through? So if their concern is about COVID, then the borders would be shut completely and that’s just not the case. So it’s really just another administrative hurdle to sort of throw at these other asylum seekers and this social class, because be themselves, the officers of course, sort of pushing these individuals back in Mexico for days in these camps and facilities that aren’t set up for COVID distancing are basically exacerbating the problem. Many of the facilities that have a large COVID outbreak, these detention centers are because of the officers. The officers are the only one going in and out. So they’re actually bringing the problem to work and to these individuals and not doing the social distancing that required, and all of these are done by contractors, which is why it doesn’t appear on that ICE sheet. That’s the problem.

Mike Papantonio: You know, Allen, last time we talked, we talked about what the public’s reaction to all this was. And at the time the issue of children was for, it was, it was right out there. We were seeing pictures of it. We’re seeing, we were seeing abuse of all kinds. And then the public was, you know, they were fairly neutral about it. Now we’re seeing numbers where they’re swinging in agreement with Trump and Trump seems to be dragging that into this election and actually making it a positive for his election. What is your take about public sentiment about all this? Where, where were we and where, where are we now?

Allen Orr: So I think we’re in different places thinking about what it is. There’s concern about COVID and there’s a large sort of drum about it came from China and that we should base that on immigrants. But in fact, in New York city, it came from other immigrants coming from Europe and the concern isn’t really, it’s a distraction for really addressing COVID and sort of giving sort of a fake up of saying it’s immigrants. You’ve seen according to California, basically say these families that have been separated for four years, you need to reunite them. And this administration is not. You’ve seen the Supreme Court basically say, you need to start processing new DACA applications and this administration has not.

So there’s a large up swell from people who are sort of interested in immigration who say, yeah, we’re concerned about COVID and we don’t want it to spread anymore, but there are issues that have been raked under by Congress that this is where it really falls at the feet of Congress of not addressing DACA, not addressing the undocumented here and not addressing the current concerns. And this outrage from the administration, from the actual presidential base is basically saying we don’t have to listen the other branches anymore. And this is, all lies at the foot of Congress.

Mike Papantonio: Allen, you’ve got a lot of work ahead of you. Thank you for joining me and thank you for being one of the people that are trying to solve this very complicated problem that we’re faced with on the borders. Thanks a lot.

Allen Orr: Thank you for having me.