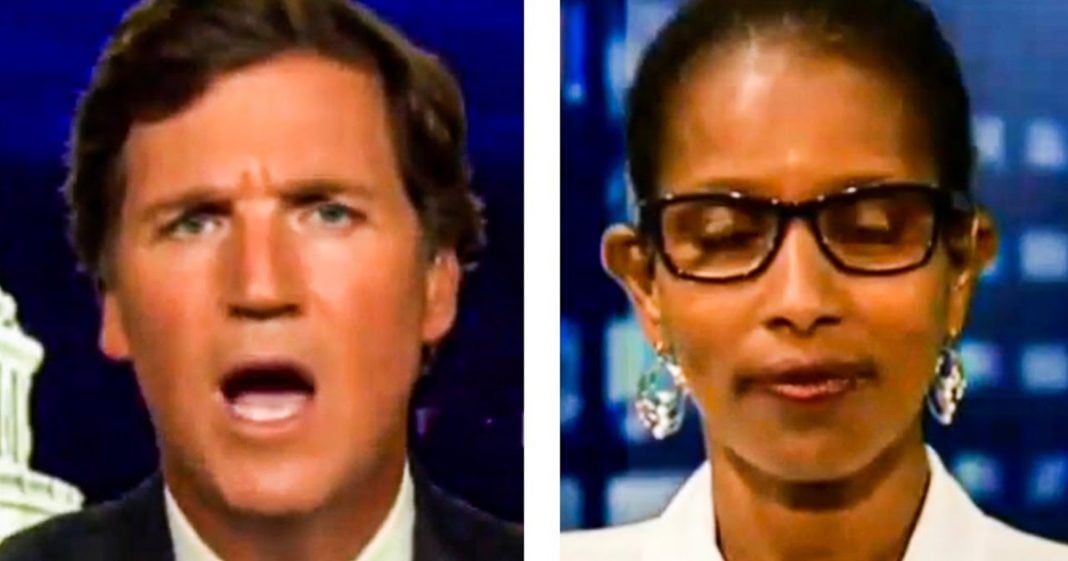 Tucker Carlson attempted to paint Joe Biden as a pro-Muslim, Sharia Law-enforcing radical on his program recently, only for the attack to come across as sophomoric and weak. This is what has happened so far with every attack from Fox News and other right wing commenters who don’t understand that Biden is about as milquetoast as imaginable. Ring of Fire’s Farron Cousins discusses this.

Fox news is trying to do everything in their power to obviously keep Donald Trump in power. Uh, and that includes launching some of the most insane attacks on Joe Biden so far. And this is actually according to polls and research that’s been conducted, uh, so far, not a single one of the attacks that they have leveled against Joe Biden has resonated with voters. So they’re having to get a little more creative. And this week, Tucker Carlson brought on a guest, a woman by the name of, uh, Ayaan Hirsi Ali to kind of launch this new attack and the Joe Biden to see how this works with the voters and this new attack is that Joe Biden is pushing done Sharia law here in the United States. Yes, folks, we have now come full circle back to the original attacks that people like Glenn Beck used to launch against Barack Obama claiming my God.

They’re bringing Shiria law here to the United States, even though I guarantee you, none of the people who watch Fox news could tell you what exactly that means. They still think it’s common. They still think it’s bad. And here they are on Tucker Carlson explaining what’s going to happen. Take a look. Well, I mean, if you’re gone by the way, Tucker. Hi, nice to see you again and thank you for having me on. Um, but, um, when you go to the next sentence, the next thing that he says on the clip, which is if you see something wrong and he quotes the prophet Muhammad, then use your hand. And if you can’t use your hand, use your tongue. And if you can’t use your tongue, then use your heart. What he’s basically doing from that point onwards is enforcing Sharia law and it is vigilantism on steroids.

Well, folks there, you have it. I mean this elderly white Catholic man, Joe Biden is bringing Sharia law here to the United States. Damn. I didn’t think he would. I did not think he was going to do it, but by God, apparently they wouldn’t because they say someone Tucker Carlson, these folks have lost their minds. I mean, they’ve never really had a good grasp on reality to begin with, but it is funny to watch them become parodies of themselves. These are not people that any rational thinking human being actually takes seriously. And I know Tucker Carlson is currently the most viewed cable news host in the history of cable news. That still doesn’t mean he has less than 1% of the U S population that watches him every day. Okay. Let’s put that in a little bit of perspective. You might have 3 million people watching you.

Oh my God. That’s a little under 1% of the population. 99%. The people out here don’t care. What you have to say. They’re not tuning into you every night. They probably think you’re just as crazy as I do, but he thinks he has power over the crazy wing of the Republican party. He certainly does, but this is the best they’ve got Sharia law, Sharia law, Sharia law. And again, I promise you, I promise you there isn’t one person there isn’t one single person who watches Tucker Carlson show, who can tell you what Sharia law is. I guarantee you that if you were to ask all of these right wing, you know, talking heads who love to talk about this crap, like Ben Shapiro or Charlie Kirk or Tomi Lahren or Candace, none of them would be able to tell you they’re probably Googling it right now so that they can, they’re like, Oh no, it’s totally, it’s this thing.

They don’t know. I guarantee you. They don’t know. And that’s the best part of this. They want you to be afraid of something they themselves don’t even understand. More importantly, Joe Biden is not bringing Sharia law to the United States. This elderly Catholic white man is not going to mess with your religion whatsoever. Trust me on that. It didn’t happen. And under Obama didn’t happen under Clinton. Didn’t happen under Carter, wake up folks. The Republicans go through this same, you know, circular cycle of attacks. And we’re all the way back at Sharia law. Now they’ve already said, he’s going to come and take your guns. This is what they do. They’re the most uncreative, pathetic political party in existence on the planet today. Their attacks are weak. Their attacks are repetitive and it’s the same attacks. They have lobbed against every single Democrat running for office for the past 15 years.