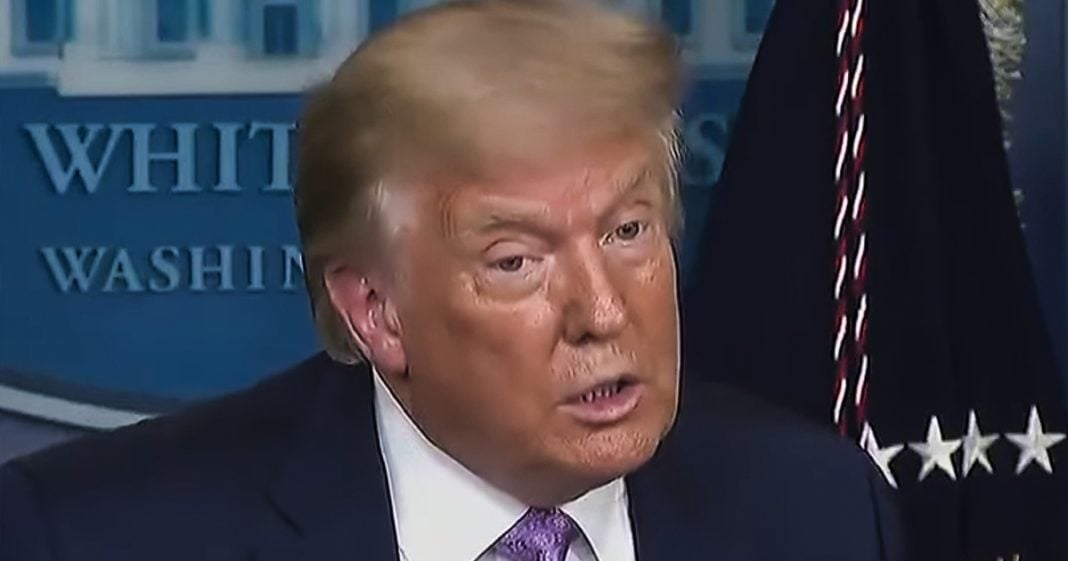 During Thursday’s White House Coronravirus press briefing, Huffington Post White House Correspondent S.V. Date decided that he had had enough of Donald Trump’s nonstop lies, and he finally asked the question that millions of Americans had been wanting to ask for years – “Do you regret all the lies?” Trump was left stunned and momentarily speechless after the confrontation, but immediately moved on to the next question once he regained his composure. Ring of Fire’s Farron Cousins discusses this.

Yesterday. It finally happened. A reporter in the white house press pool. Uh, S.V. Date the Huffington post white house correspondent, I guess finally had enough. And when he was called on by the president, he straight up asked Donald Trump, if he regrets any of the lies that he’s told the public over the last three and a half years, take a look at the exchange.

S.V. Date:    Mr. President, after three and a half years, do you regret at all, all the lying you’ve done to the American people?

Donald Trump:    All the what?

S.V. Date:    All the lying, all the dishonesties.

Donald Trump:    That who has done?

Reporter:    I wanted to ask you about payroll tax.

Millions of Americans across this country have wanted to ask him that very question. Millions of people have been waiting for some reporter, any reporter to really hit that point and just straight up say like, Hey, what’s with all the lies, man. Why do you lie? Constantly, according to the Washington post, by the way, the man is told over 20,000 lies since becoming president of the United States and mr. Dates, Hey right there just, just did it. And I love the fact that Donald Trump and the clip was like, what? Not, what month come again? I didn’t would you, did you really like, he was taken aback? He’s like, did you, did you really just say what I think you just said to me, he just straight up repeated it. He didn’t stutter. He’s like, yeah. How do you feel about lying all the time? Three and a half years, man.

What’s up with that. And then of course, Trump just moves on. He gets the softball question about, Oh, let me ask you about your payroll tax. And nobody gives a crap about that. Um, it’s his way to put money in his pocket while screwing over poor people, living off social security. That’s that’s what that’s about. I want to go back to the lies. The next person should have straight up said, yeah, I want you to answer his question. That’s how that exchange should have gone. But really folks, this is what journalism needs right now. And I know that’s not the same as foiling documents and digging through and getting the scoop and finding the leaks and all that stuff. But every now and then it is nice to see the press call them on their BS. And that is what this re a reporter did yesterday that has been needed that has been sorely needed.

And I’m hoping that what’s happened here was Ben Swan. The guy from Axios, the one who called Donald Trump out on his lies recently, I’m hoping that that actually kind of opened the flood Gates. A little bit of reporters, no longer being afraid of this man, no longer being threatened by him. No being worried that he’s going to label them as fake news. If they’re mean to him. I think that might be what we’re seeing. I’m hopeful because if the press does not have a backbone, then it may as well not exist in this country. We have for too many years seen the spinelessness of American journalists, but that spine appears to be regrowing right now. I feel like they’re coming back and that’s a good thing because that is what we need. We need a hard hitting press. We need a press that isn’t afraid to ask questions. We need a press that isn’t afraid to call out the president of the United States. And that’s what we saw yesterday.