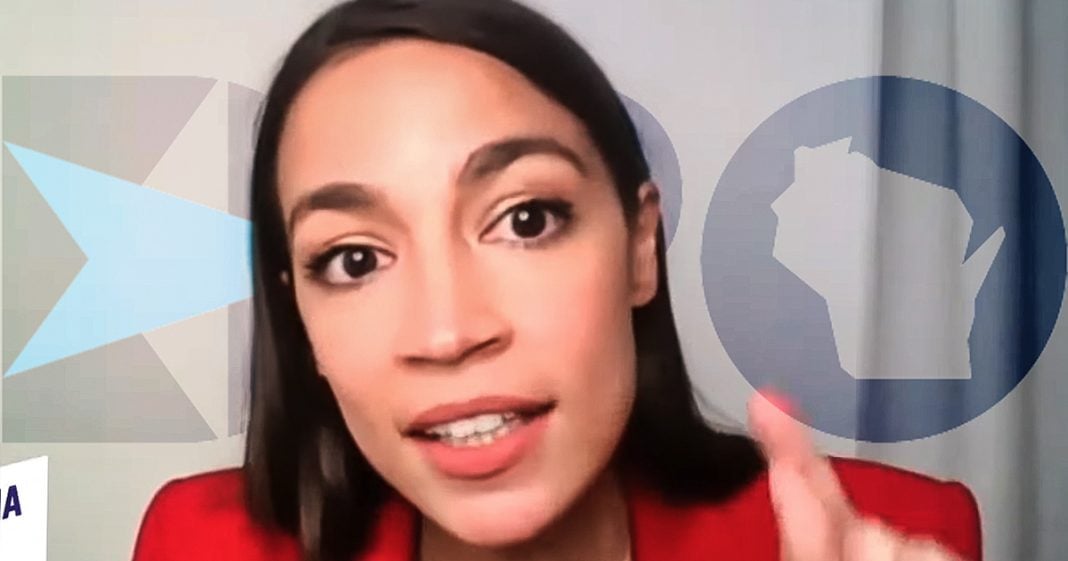 Representative Alexandria Ocasio-Cortez, one of the rising stars of the Democratic Party, will be given a paltry 60 seconds to speak at next week’s Democratic Convention. Meanwhile, white REPUBLICAN men like John Kasich and Michael Bloomberg will have actual speaking slots where they get to deliver full remarks to the digital audience. The DNC should be ashamed of themselves, even though this isn’t surprising at all. There’s plenty of room under their big tent, unless you’re asking for space for a progressive. Ring of Fire’s Farron Cousins discusses this.

It was announced earlier this week, that representative Alexandria Ocasio-Cortez, uh, one of the rising stars of the democratic party. And let’s be honest at this point, she is a household name. She is being given 60 seconds to speak at next week’s democratic convention. In fact, when you combine the time that she gets along with every other member of the squad, uh, they combined have 60 seconds to speak because none of the other members were even invited to speak at the democratic convention for women of color who have legitimately become household names who have become champions of causes. For average, everyday Americans, they’re rejecting the big corporate money that is corrupting the core of the democratic party. These women represent what the democratic party is supposed to be. And the party responded accordingly by saying, you get 60 seconds, you get one frigging minute because we got to make way for elderly white Republicans, white male Republicans.

So for women of color, you can go, you got one minute, good luck, um, old white Republican men at the democratic convention, you get, you get a full slot. You get all the time. You need, John Kasich have added. We know you signed what was at the time, the most restrictive abortion bill in the history of the United States. So you’re horrible towards women. We know you’ve helped bust unions. We know you engaged in massive voter suppression. Um, you get a full speaking slot instead of AOC, Oh, Mike Bloomberg, a Republican who came along and, you know, tried to buy our party and corrupt us with your money. You get a whole speaking slot. Come on. I’m sorry. I own a Presley. I’m sorry. Rashida to leave. I’m sure a sorry. Alon, Omar, you, you get nothing you can live stream at though. Maybe I don’t even know in AOC, you get one effing minute.

Apparently there’s plenty of room in the democratic. Party’s big ticket, a big tent party. Excuse me. Unless of course you’re a progressive, even if you’re a woman of color, you know, the democratic party loves to be the party of diversity, right? If this was Republicans doing this saying, we’re putting the women of color over here and we’re bringing on more old white men, that would make sense. We would expect the Republican party to do that, to push aside women and bring out old white men. Honestly, wouldn’t expect that from the democratic party. I I’m shocked. I’m shocked. I shouldn’t be shocked. This is on par with how they’ve been for the last few years, but I’m still shocked. More importantly, I’m furious. I’m ready to take my democratic party voter registration card and rip it to shreds and then light the shreds on fire and then piss on the fire. That’s how angry I am at the party for doing this. This is sick. I’m not going to be a part of a party that embraces John Kasich. I will not because that party is a Republican party and I’m damn sure, not a Republican.

I’m a progressive, I’m a leftist liberal. I thought for the longest time that I was a Democrat. And I think I still am. It’s just, I’m a Democrat from the 1940s and fifties. The people running the party today are Republicans from the 1980s. And that’s the problem with the democratic party. You want to bring in new blood. You want to bring in new voters. Then how about you embrace the people who are actually enjoying a, an incredible amount of success. Every member of the squad won their primaries, including the most recent ones this week. They’re all safe. They’re all up for reelection. Again, they beat back the big money that tried to get them out of there. And they’re still here and they’re going to be around for a long time. John Kasich, won’t be the second. Trump is out of office. These snakes that you have invited into your party, aren’t going to jump up and bite you right in the ass.