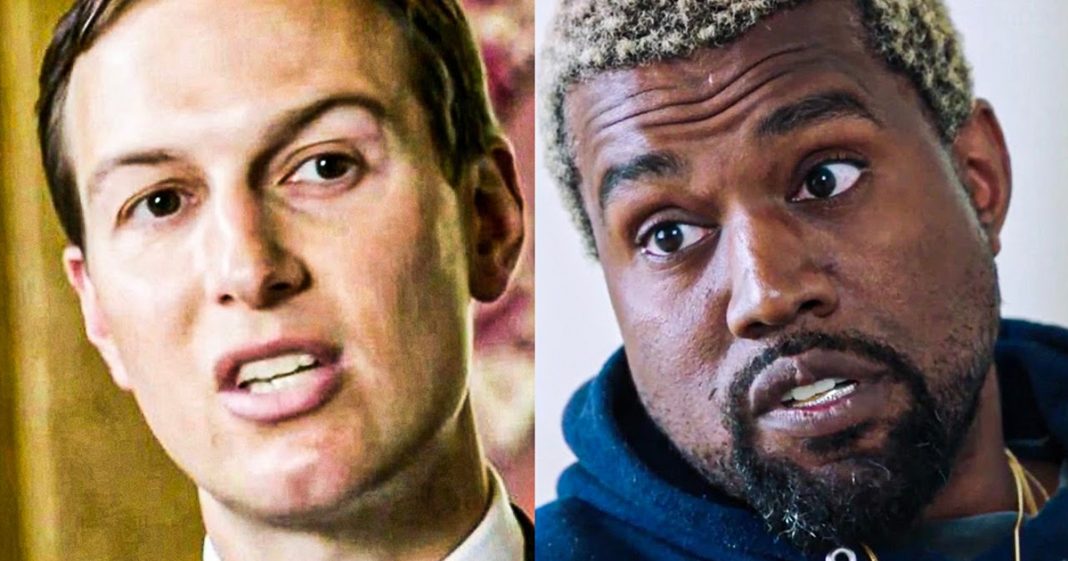 Jared Kushner secretly met with Kanye West recently, shortly after West admitted that his potentially law-breaking Presidential campaign was a ruse to steal African American votes from Joe Biden. But this secret meeting between the two scumbags likely ran afoul of campaign laws that forbid collusion between one another. This wouldn’t be the first time that collusion was a problem for this administration, as Ring of Fire’s Farron Cousins explains.

Kanye West’s presidential bid, if you can call it that has already run a foul of the law in, uh, several States where it appears that his signatures for his, uh, to get his name on the ballot, uh, or identical. So there’s already an investigation going to see if he broke the law with that. But now there might be a new investigation, as it was recently revealed that Kanye West was seen meeting with Jared Kushner. Uh, the unofficial, I guess you’d call him chief of the Trump reelection campaign. Uh, the two were recently spotted together in Colorado. Uh, while Kushner was there on other business, uh, West was there, they were together, chatting it up. And as George Conway from the Lincoln project pointed out, if there is any kind of, let’s call it collusion

Between these two campaigns, whether Kanye is actually serious about his campaign or not, it does in fact exist. So if there is any collusion, if there is any coordination of any kind between these two groups, it is 100% illegal. It is a violation of federal elections law. One campaign can not conspire with another. Uh, I know that seems weird, but that’s a federal law. You can’t work with this other campaign. And the reason they do that is so you don’t have a situation like we have with Kanye, a situation that he’s actually admitted to, which is that he is launching this campaign in order to siphon African American votes away from the Democrats so that Trump can be reelected. Kanye has no actual intention of becoming president or launching a serious campaign. He just wants to get enough black voters away from Biden so that Trump has no problem winning election.

Um, so far polls showed that’s not happening at all. Like everybody sees through Kanye as little act and maybe that’s why he was meeting with Jared Kushner. Maybe the two were meeting to say, Hey, this thing isn’t working the way we thought it would. Where do we go from here? We already know, by the way, the Kanye West has been using Trump advisors in some States across the country, including Wisconsin. So the campaigns are apparently already sharing the same advisors. This is a criminal enterprise at this point. That is the only way to describe it because of what they are doing. And the fact that it is 100% illegal. And that’s the thing that gets me about this administration is that they just, they just don’t care anymore. They don’t Care. I’m also willing to bet they, 100%

Don’t know, Jared Kushner is not a smart person. He simply said not, he doesn’t know what he’s doing, but that is no excuse for breaking the law. And even if he does know what he is doing, he relishes in it. I mean, they, they get off on this. They have some sick sexual fetish, I think when it comes to breaking the law. And I think we’re seeing that play out right now and it’s very disgusting to watch, but it is a parent at this point that there is some kind of coordination between these two campaigns. If this coordination does in fact exist. If Donald Trump is encouraging Kanye to run, if there have been discussions between these two groups about the goal of Kanye, his campaign, which he has stated again, is the siphoned black votes away from Democrats. If the Trump campaign has encouraged this in any way, if they have offered any help, if they have agreed to anything in exchange in return or anything at all like that, then yes, both of these campaigns will be in violation of federal law.

And as such, the people involved should go to jail. Simple as that, this Trump administration and the Trump campaign, both from 2016 and 2020 appear to be little more than criminal enterprises. And it’s time that we put as much effort into busting these guys, as they do into busting small town, drug dealers selling a half ounce of pot, we got real criminals in this country and they’re laughing at the laws. We can put an into that cause we see what’s happening. We can tell that they’re breaking the law. We just need some body, maybe a body of Congress. I don’t know somebody with a little bit of courage to stand up to this administration and putting into it by throwing every one of them involved in jail.