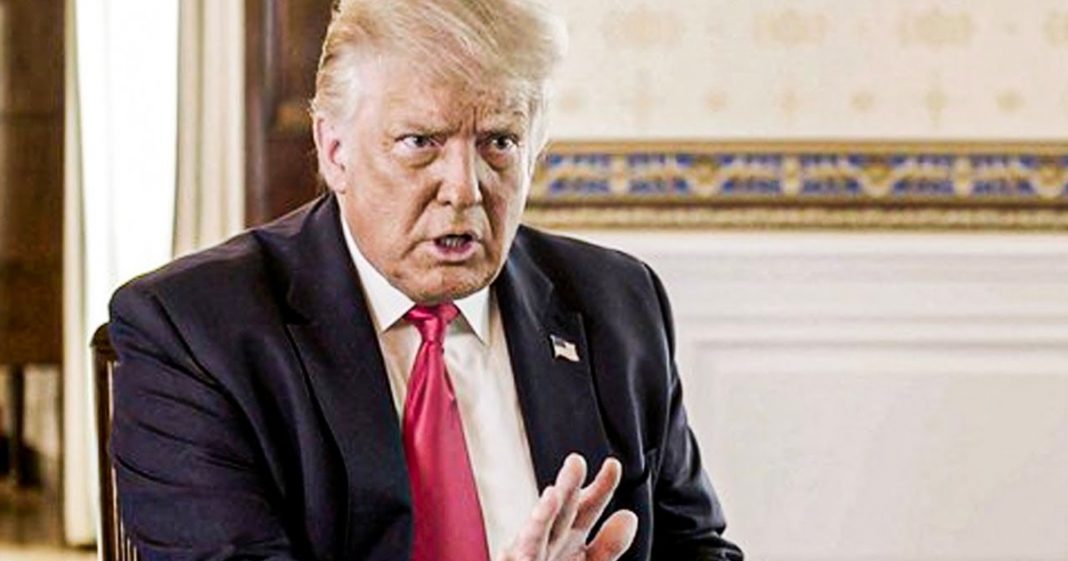 In an interview with Fox Sports on Tuesday, Donald Trump was asked about Biden’s choice of Kamala Harris as his running mate, and Trump responded by saying that choosing a woman is an insult to men everywhere. Someone needs to tell Trump that insulting every woman in this country is also a very bad electoral strategy considering he can’t win the nomination without them. Ring of Fire’s Farron Cousins discusses this.

On Tuesday, uh, shortly after Joe Biden announced that Kamala Harris was going to be as picked for VP Donald Trump didn’t interview with Fox sports, where he suggested that Joe Biden choosing a woman as his running mate was somehow insulting to men all over the planet. Here’s what Trump said. Uh, some people would say that men are insulted by that. Uh, some would say, it’s fine. I don’t know. But that was in response to, uh, uh, clay, Travis, who was the host, who said, you know, he said he had to pick a woman. And Trump says, well, you know, some people would say that, uh, that’s insulting to men. There’s some, wouldn’t say that I don’t, we know exactly what you’re doing. Right. That is exactly how people handle that situation, where they want to give like their horrible opinion, but try to make it sound like it’s not, there’s like, ah, no, man.

Some people would say that that’s a, you know, pretty sexist towards men. I mean, some people would say, I don’t want to, I don’t know who says what? Yeah. We, we know what you say. You think it is insulting to men because you don’t think for a second, mr. Trump, that a woman could ever be on your same level. You don’t, you absolutely do. Not. Women are creatures that were put on this planet simply for your amusement and your pleasure. That is how it exists in Donald Trump’s world. It doesn’t matter how successful you are, how intelligent you are or how powerful you are. You will never be on Donald Trump’s level in his own mind. And that’s why he made this comment. And I am sure there are plenty of those, uh, you know, kinda the, the, the right wingers who think all women are bad, who absolutely think that announcing that you’re going to pick a woman no matter what is somehow insulting to men. But guess what? The men who think that it’s insulting, it’s actually pretty okay to go ahead and insult those men because they’re assholes. Let’s not beat around the Bush either. Folks, if you think that saying, I’m going to pick a woman is insulting to men, then you’re the kind of man that actually deserves to be insulted anyway.

Right? That’s where we are. There is nothing wrong with Biden’s saying this. There was nothing wrong with him making that commitment. Yes, he did what he felt he should do what he felt he needed to do. And when you’re looking at a presidential ticket on the right, like Trump Pence Pence, who, because of his so-called religion believes that men are superior to women and Trump based on all of the accusations against him, who believes that a women are nothing more than objects, then yes, it does make sense to counter that ticket with a woman on the other side. That makes perfect sense. That is not necessarily by Joe Biden course. It probably is a little bit, let’s be perfectly honest. Most of politics is pandering, but think about it this way. Donald Trump even tweeted out earlier this morning that I will win the suburban housewife as if that’s really a thing that totally exists anymore. You know, back in the sixties, early seventies, the suburban housewife. Absolutely. Yeah.

We have women who go out and get, go to college and they get careers. That’s always been their plan since birth. They’re not thinking well, I’m just going to stay home and raise the kids while John goes out and makes the money. That’s not a thing that happens anymore. They’re they they’re taught to be strong. They know that they’re not meant to just sit at home being baby jeans. But Trump is still out here this morning, tweeting out those insults to women. So you may think Biden’s insulting men everywhere, but guess what you’re doing on a constant basis, you’re insulting women everywhere and Biden can actually afford to insult men everywhere. Do you know why? Cause this not the white uneducated men who are going to put him over the top. It is the middle class, middle of the road, women here in the United States. That’s kind of the swing group. They went for Trump, unfortunately in 2016, they’ve abandoned him according to the most recent polls in 2020. And if Trump keeps doubling down on his statements saying that I’m going to win you. I own this demographic. Yeah. Good luck with that pal. Cause they already hate ya. And you’re just making them hate you even more.