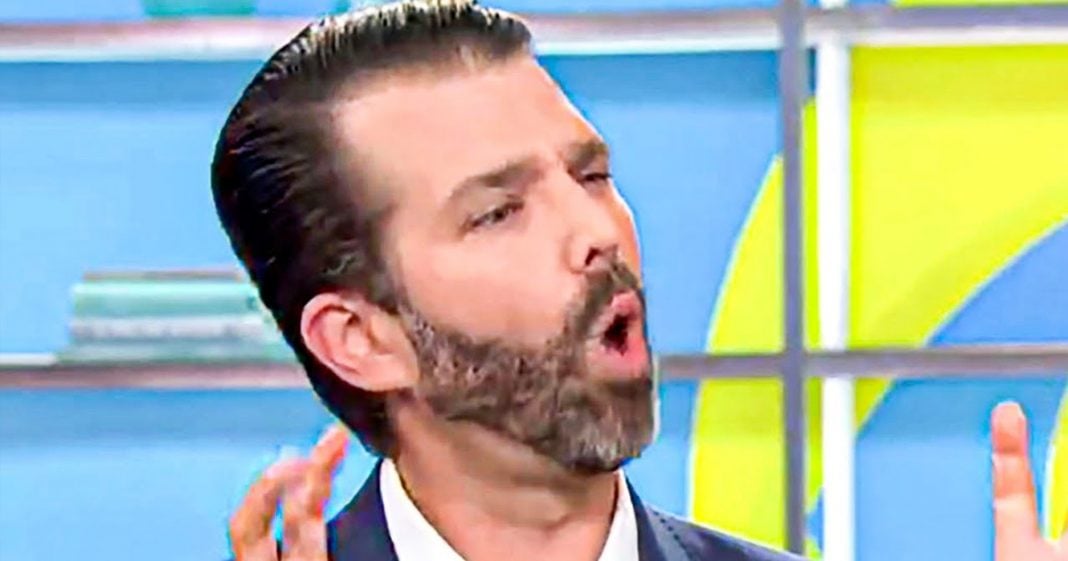 Donald Trump, Jr. sought to remind the country that Kamala Harris says that she believes the women who have accused Joe Biden of misconduct by tweeting out an article from The Hill where Harris says this. But the Internet was quick to remind him that his own father is facing far more severe claims from multiple different women, causing Junior to slink back into his hole. Ring of Fire’s Farron Cousins discusses this.

Yesterday, shortly after Joe Biden’s campaign announced that they had selected Senator Kamala Harris as his running mate for 2020 Donald Trump jr. Decided to get in on the action. Right? I mean, obviously this thing is blowing up all over social media was the story of the day. And Trump jr. Thought that he could land than attack. That would end Harris’s campaign before it even really started. Here’s what he did. Little Donnie jr. Gets on Twitter actually, before he gets on Twitter, he finds a link to an article from the Hill from earlier this year where Senator Harris said that she believes the Biden accusers though, the women who have accused Biden of a sexual misconduct and inappropriate touching.

Trump jr. gets the link to that article, tweets it out with just one comment. The comment is yikes. In all caps followed by four exclamation points because dang it. He wanted you to know that this is yikes. And this is the woman that, that Biden is picked to be as running mate. Oh my God. Luckily, this attempt to, uh, really get a good zinger in there on Harris, uh, fell flat immediately because everybody on social media was very quick to point out that people in glass houses should not throw stones because yeah, Biden’s been accused of some horrible things, horrible things that he’s done a really horrible job of, uh, answering for, to be honest, but even his horrible job is still somehow better than Donald Trump and his response to the more than 20 women who have accused him of the same thing and or worse than what Biden has been accused of.

In fact, I mean, just last week, actually, a judge ruled that the defamation case against the president can proceed because Donald Trump called the woman E Jean Carol who accused him of rape. He called her a liar and now she’s suing him for defamation, just like summer Zervos, who the president also called a liar is suing the president for defamation. I don’t see anybody suing Joe Biden for these things, but that doesn’t for a second excuse with Joe Biden did see, even though Donald Trump Jr’s attack here resulted in him, just face planning and getting roasted by social media, it does bring up a valid point. And that is it doesn’t matter. What’s sitting there on the other side, if your defense of any of the accusations against Biden is yeah, but Trump, Nope. Nope. You’ve already lost. You don’t ever, ever, I don’t care what it is.

You don’t ever defend something by saying the other thing is worse. You don’t do that. That’s a crappy argument. And it also shows that you don’t have a real defense for what you’re trying to defend. It doesn’t matter if you talking about, Oh, well Biden’s been accused, yo, Buttrose been accused by like 40 women, man. That doesn’t make this okay. Over here though. Okay. It’s not the lesser of two rapists. We can’t have that. And unfortunately that is what Twitter made it out to be. Yeah. It’s sent Trump jr. Running home with his tail between his legs, but it still doesn’t offer a good enough explanation as to what actually happened between Joe Biden and Tara Reed. That’s what the public needs to know. This is something I think Joe Biden should address again. I think he really should. I absolutely 100% think he should.

And yes, he has already done a much better job of addressing that than Trump has with any of the accusations against him. But at this point I don’t care what Trump has done. Trump’s not ever going to win my vote ever, ever, ever Biden has a chance to do it. And I would like to see him try. I would like to see him come out in, offer us really good evidence as to why this didn’t happen so far. He hasn’t necessarily been able to do that. I would like to hear from Tara ReReadeed again, this stuff doesn’t just disappear, but we’ve allowed it to disappear. And by allowing it to disappear, you give the Republicans the opportunity to be the ones to bring it back because they know all this stuff about Trump. It doesn’t bother them. It doesn’t, but with Biden, it does. So it is a real issue. And Mark my words, if Biden, doesn’t jump out there and get in front of it right now, the Republicans are going to throw it in front of him, creating a massive hurdle for him as we get closer to the election.