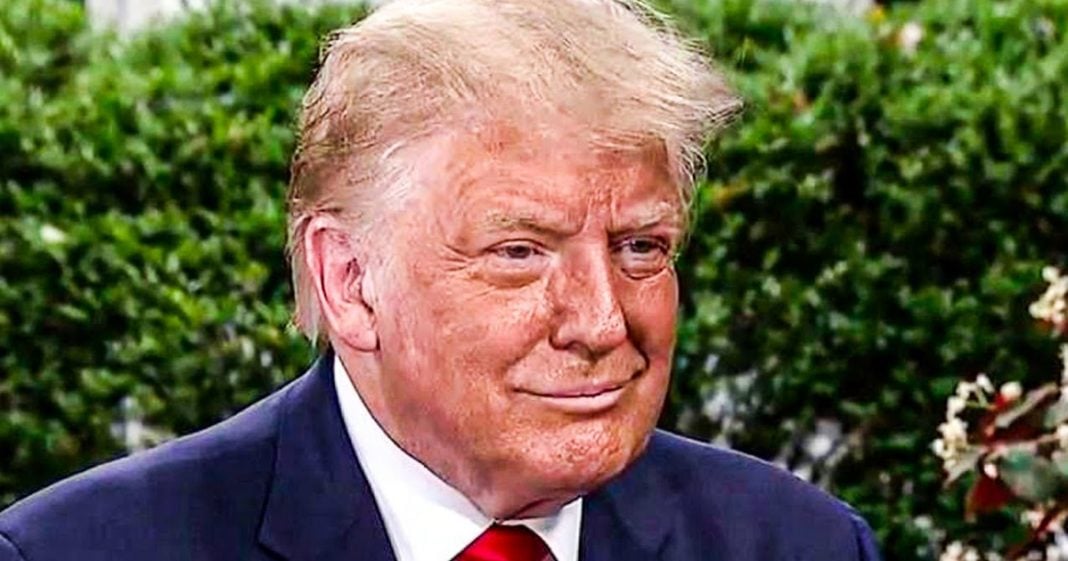 The death toll in the United States stands at 160,000, with new cases continuing to climb every single day. And even though Donald Trump said that Obama should resign from office years ago when a couple people died from Ebola, Trump now says that he has done an “amazing” job of handling the current pandemic. The man is blind to his own faults, and that is getting Americans killed, as Ring of Fire’s Farron Cousins explains.

During an interview earlier this week, Donald Trump said that he and his administration had done an amazing job with regards to the pandemic here in the United States. At the same time, the United States was crossing that grim threshold of 160,000 people dead from COVID-19. The president is out there patting himself on the back saying, I think we’ve done an amazing job. Now let’s rewind a couple of years back in 2014, Donald Trump tweeted out the following. He said, uh, that Obama should apologize to the American people and resign because he let people who tested positive for Ebola enter into the United States. Not long after he tweeted the following. He said, um, if Obama resigned from office now, thereby doing a great service to the country, I will give him free lifetime golf. He repeatedly called on Obama to resign over the Ebola deaths that happen here in the United States. And for those who weren’t paying attention back then to the Ebola outbreak here in the United States. Yeah. How many people died from that?

Two, two, two people here in the United States died. Neither of them contracted the disease here in the United States either. So two people died from that. Trump says, uh, Obama should have resigned. Four people, Diane Bengazi and Republicans hold years worth of hearings to find out what went wrong. They wanted Obama to resign. They wanted Hillary Clinton thrown in jail. That’s not to say that these lives weren’t valuable. They were, every life is valuable. Every life is good and we should cherish it and protect it. But I don’t think that even, you know what, let’s add them all together. Six. I don’t think that those six deaths are somehow worse than 160,000 deaths here on American soil. Here is what Donald Trump had to say Monday is what he had to say on Monday in this interview, because he was specifically asked, Hey, you said he should resign for Ebola. Would you be calling for him to resign? If he had 160,000 people dead from COVID-19 and Trump said, um, uh, first of all, he said, no, he wouldn’t, but then you said, I think it’s been amazing. What we’ve been able to do. If we didn’t close up our country, we would have had 1.5 or 2 million people already dead. We’ve called it right now. We don’t have to close it. We understand the disease, not a single thing that you’ve just right there is true.

Not one word of what the president said was true. We, we, we didn’t close up the country. That’s not a thing that happened. We don’t understand the virus. Now you still don’t. And the people on your team who do have a better understanding of it, you ignore them and you launch a national smear campaigns against them. Uh, those models that said we could have 1.5 to 2 million people dead. That was if we did absolutely nothing to mitigate it. And let’s be honest, we’re not on the downswing yet. We could hit those numbers. It’s predicted that we could have what, 5 million infections by the end of the year, actually by election day. I think that is, yeah, we don’t have this under control and you damn sure didn’t do an amazing job. This man, the president of the United States is living in his own delusional world. And it’s a delusion that’s getting American citizens killed. He thinks he did an amazing job.

He honestly believes that as every day, 1000 or more Americans drop dead from this virus because of how horrible he is. As a leader, in any other rational country on the planet, they would have removed him. They would have removed him with prejudice, but not here in the United States where he is protected by the disgusting Republican party who understands how bad he is. They understand that he’s actually hurting their own reelection campaigns right now. And they’re kind of sad about that, but guess what? You deserve it on behalf of the 160,000 dead Americans, you deserve it. And I hope that if you lose your elections this year, you understand why you had your chance. He could’ve gotten rid of this crazy asshole, but instead he chose to stand by his side. As more than a hundred thousand Americans died.