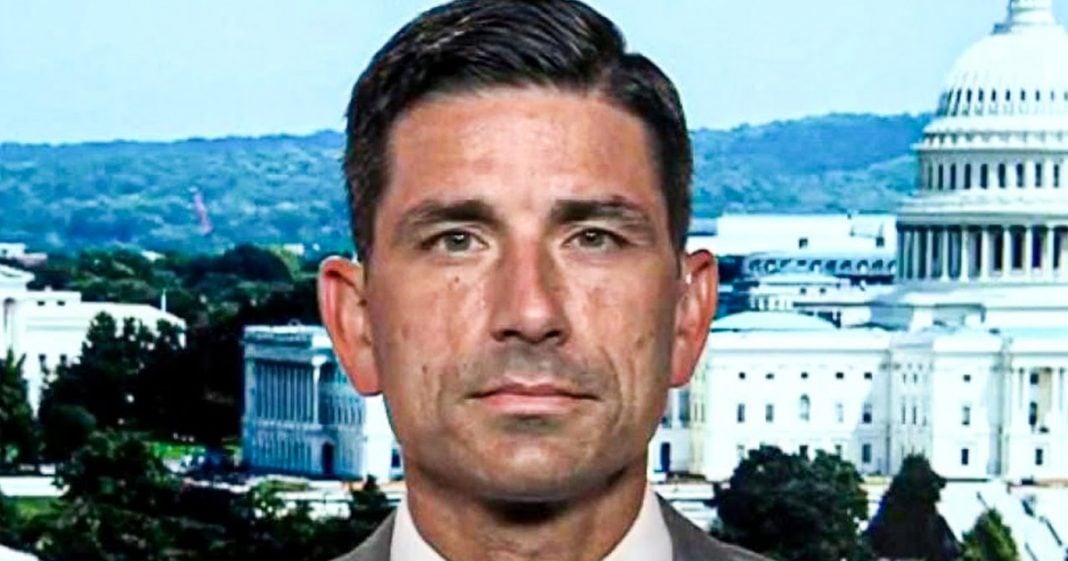 Acting Homeland Security Chief Chad Wolf defended ICE’s practice of separating migrant children from their parents and holding them in hotels prior to deportation, claiming that this is something that the agency has done “for decades.” Regardless of the fact that ICE hasn’t been around “for decades,” the practice is cruel, inhumane, and completely unnecessary. But with this administration, the cruelty is the point. Ring of Fire’s Farron Cousins discusses this.

Last week, uh, acting chief of department of Homeland security, Chad Wolf, uh, during a questioning session by the United States Senate defended this administration’s practice of not only separating migrant children from their parents, but of separating the migrants and then sticking those children into hotels rather than the approved and government paid for facilities. For housing migrants, they were sticking them in hotels. They were sticking them in hotels, in Arizona, hotels in Texas, some of them children who had been separated by their parents as young as one year old, there was apparently one group that was several five year olds who had been separated from their parents and put together in a hotel for two weeks. But Chad Wolf, right? The manliest of names

That’s not true. The one year old that I mentioned earlier was there for almost a week. The group of five-year-olds was there for two weeks. Most people are there for several days, which is a direct violation of the Flores settlement, which is why there’s more and more lawsuits challenging what Chad Wolf and the department of Homeland security are doing. Here’s the thing though. Folks, his justification for this was that just how it’s always been done. It’s been done for decades, even though ice hasn’t existed for decades. Ice has existed for roughly 16 and a half years, but it doesn’t matter. It doesn’t matter if ice had existed for 2000 years. It doesn’t matter if this had always been the practice throughout all of human history, uh, that doesn’t make it okay. You know, there was a time in existence in human existence where it was totally cool and acceptable to sacrifice human beings, to sacrifice children, to go, you know, uh, bring them up onto the altar and just cut them open and let the animals come and devour them.

That was a sacrifice. And that was totally accepted. Everybody was like, yeah. Okay. That’s what we do. We look on that now, as, as barbaric, you know, there’s lots of practices throughout history that up to that point were how things were always done. But we look on it now and we say, my God, how can you do this? Why would you let this happen? This is awful. I hope that is how we look back on this administration. It’s how we look back on the Obama administration. I’ll tell you that much. We were all bright eyed and bushy tailed throughout the Obama administration. Some of us woke up very quickly to the fact that they were not all that they seem, they continued the drone bombing over in the middle East. They were the ones who started the family separation policy of locking children in cages, away from their parents. We see that we accept it. We acknowledge it. And we are horrified by it just as we are horrified that this administration is doing those things on steroids, because I am not going to delude myself into thinking that Obama was out, was without problems. He had plenty and we have addressed every one of them, most of them as they occurred. But to say that what Trump is doing is just a continuation of it. That’s also a misnomer. He has escalated these issues and Chad Wolf explain why, because that’s how it’s always been done.

That is one of the greatest failures of the Obama administration, by the way, not that they started these things with it, they continued these things, but that they didn’t go back and put an end to these things legally. And I don’t mean legally in the program. I mean, hold those responsible accountable and send them to jail and prosecuted them. Cause you could have ended the program. Then the next guy could have just started it back up. But if you would not only ended the program, but also then send some people to jail for it, for the multitude of laws that they broke while doing this, then you would have seen something different. Then we would have seen a real different United States than what we’re seeing today.

That’s the problem folks. That’s why we have to hold our incoming leaders to a much higher standard. That’s why we have to press these issues and say, you have to go back and prosecute Obama and Eric Holder told us from the beginning, when they came in, they said, listen, we’re going to look forward. We’re not going to look backward. I think that was the exact quote. Actually, we’re not going to prosecute the war criminals of the Bush administration because we want the country be able to heal and move forward. That’s a beautiful talking point. But in practice, all it does is tell the next person down the line or hell even people in your own administration that if you do what they did, we’re just going to look the other way. So don’t you worry about it. If you have to do it, go ahead. Nobody’s here to stop you. Nobody’s here to hold you accountable. That’s what the kids in cages is. That’s what the family separation is. It was horrendous when it took place under Obama, but then Trump inherited it and he somehow managed to make it even worse.

And if this is in stopped, if this isn’t investigated and if a few people don’t somehow end up in prison from this, eventually it’s going to expand again, the two people on the ballot at the top of the ballot, the two people who have a chance at winning this year, let’s be honest, have both use this family separation program, both Obama and Donald Trump. They have both been a part of administrations that have actively separated migrant families along our Southern border. They have abused the rights of these individuals. There are plenty of lawsuits, some of which are just now being finalized and settled, uh, with regards to the treatment of these migrant detainees that actually started the lawsuits under the Obama administration. They weren’t giving them soap. They weren’t giving them basic necessities. That was under Obama folks. That wasn’t just a Trump thing. Although, as I mentioned, Trump came along and he made it worse, but we have to recognize the evils within our own party.

Sometimes we have to accept that our party is fallible, that our party does make mistakes. And then our party does stupid things. And when we finally are able to admit that stuff, we have to look in the mirror and say, okay, now hold the people who did it accountable then because that’s the second half, that’s probably the most important half because if we don’t do that on our side, if we don’t get rid of the bad people and we leave these bad policies in place, there’s always going to be a worst Republican that comes along just like with Trump and Chad Wolf, that makes the problem so much worse.