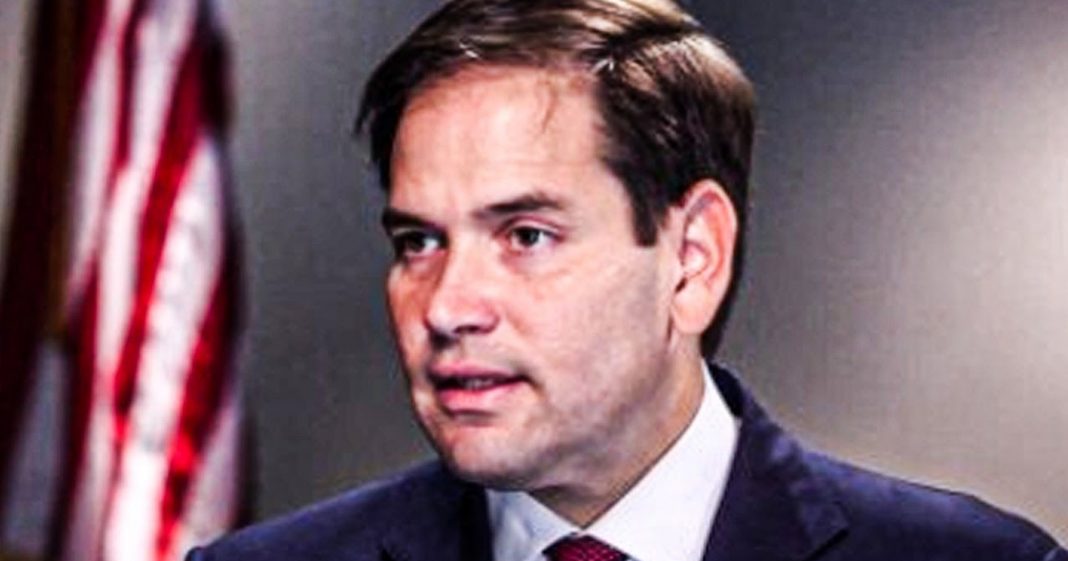 Republican Senator Marco Rubio took a beating from social media users on Monday after he attempted to see the “good news” in children being infected with COVID 19 after returning to school. Rubio claimed on Twitter that the “good news” about infected children is that they aren’t at risk of complications from the virus, a claim that has repeatedly been proven false. Ring of Fire’s Farron Cousins discusses this.

So it was reported over the weekend that, uh, that infamous school in Georgia, the high school in Georgia, uh, that had suspended the students who posted the pictures of the crowded hallways with most of the students not wearing masks. Uh, they then unsuspended those students after public backlash. Uh, they were forced to close Monday and Tuesday of this week because several students and faculty members ended up testing positive for COVID-19. Uh, this was 100% predictable. Everybody said, this is what’s going to happen. And lo and behold, this is exactly what happened, right? This, this wasn’t rocket science. We knew exactly how this was going to play out and it played out accordingly. But one thing we couldn’t have counted on was Marco Rubio, Republican Senator from my state here in Florida, uh, trying to tell us all to look on the bright side of all of these kids, getting COVID-19 and on Monday, Rubio decided to finally address this issue by telling us again, to look on the bright side.

And here is what Rubio tweeted about the situation with the school, having to reclose after the COVID-19 outbreak. Here’s what Rubio said. Any setting in which people interact will lead to infections. The good news is that these infected students are at very low risk of complications. The key is lowering risk of student infections. More importantly, lowering risk of students, infecting staff, or high risk family members, silver lining, right folks. I mean the good news is you’re probably not going to die. Probably we hope. I mean, it’s kind of played out a little differently here at America in terms of who’s dying from it than it did overseas.

Uh, so, you know, good news, Who’s you, you probably aren’t going to die from the things so says Marco Rubio, who by the way, has never been accused of being an intelligent person. And I, and I think this is why kind of hard to find the silver lining and children catching a disease that could leave their lungs permanently scarred. It can cause a fever so high that it can lead to permanent brain damage. That’s that’s not good. There’s there’s really no good way to spend that. Marco really isn’t and you’re sitting there saying in the first half of your tweet, by the way, let’s talk about the contradictions. You put out, you say like, well, if you got people close together, there is literally no way you can stop the spread of the infection. Literally can’t happen. If you put people together, the is going to spread. Then the last thing you say in your tweet is like, well, we have to make sure that they don’t give it to people who are at high risk.

You can’t do that in the setting that you’ve described, because you already admitted in the setting that we are now living with reopening schools, you yourself say at the start of the tweet, it’s going to happen. Virus is going to go crazy. Can’t stop it. Nothing we can do to stop it. When people are grouped together, you say that you say that in the tweet, that’s the first thing you say in the tweet. And the last thing you say is we just have to make sure we don’t spread it, which you already admit isn’t possible to. Do you see what I’m getting at here? Do you see why I mentioned that you’ve never been accused of being an intelligent person. You admit yourself because you know the truth, every Republican knows the truth. Hell every Democrat knows the truth. So let’s take a second by the way, to call out Chuck Schumer, quite possibly one of the most worthless Democrats on the face of the earth right now.

Cause Chuck Schumer last week was also pushing for kids to go back to school. Cause he said, if you don’t do that, we can’t ever reopen the economy. Most Democrats had enough. Good sense to call Chuck Schumer out for this horrible right wing take. But there were plenty of them that I saw on Twitter. Cause I retweeted this and I read through a lot of other people’s comments who also retweeted it. Uh, plenty of bootleggers in the democratic party say, well, I mean, technically Chuck’s rod. We know if we’re going to call Republicans out for it. We’re damn sure going to call Democrats out for it too. There’s no safe way to reopen the schools. They all know it. They all know it. Rubio admitted it in his tweet. The doctors are telling us all the time, they’re admitting it behind closed doors. What they don’t want us to know is that they just don’t care.

Cause they can try to spin it. However they want in public. They can try to say, well, we have to do it to kickstart the economy. We have to do it. So parents can go back to work. We have to do it for X, Y, and Z reason that Congress through legislation could also address. That’s the other part. That’s the other dirty little secret they don’t want to think about. And they don’t want you to know about, they could address this. Oh, well parents got to get back to work. Well, what if you were continuing to give them UBI payments throughout the pandemic, suddenly it wouldn’t be such an urgent issue for them to get back to work. What if you weren’t trying to give corporations immunity when somebody gets sick because they didn’t have safety precautions in place. Yeah. Maybe people would be more willing to go back to work if they thought, well, my company has to take care of me.

Otherwise their asses on the line. Did you think about that? No. You didn’t because you chose not to because the lobbyists came in and told you not to think of it. That’s also another thing we’re finding out right now. People like Marco Rubio are only stupid by choice. Rubio’s tweet here is ignorant, but it’s because he chose on this particular issue to be ignorant. He was paid to be ignorant. That’s what most of these lawmakers are. Few of them are genuinely stupid. Some of them are don’t get me wrong. Some of them are genuine. Wow. How do you even get yourself dressed in the morning? But the rest of them who act like that, it really truly is an act. They’re doing it because they’re trained circus monkeys. Essentially. They hear that Oregon grinder music and they start dancing and their donors are throwing the dollars at them.

Doesn’t matter that it hurts. The American public doesn’t matter that it goes against everything. This country allegedly stands for. It doesn’t matter that it goes against everything. Their religious values tell them they’re supposed to be against. If the money is right, they’ll go against it all. They will do anything for those dollars. And that is what we’re seeing right here. Even somebody like Marco Rubio, who loves to tweet out his little Bible quotes, he loves to act holier than now, loves to pretend like he genuinely cares about all of humanity. And then he turns around and shows his true self, which is the part of him that is sold to corporations where he says, Hey yeah, your kids got sick. But the good news is they’re probably not going to die from it. Even though kids in the United States have been dying from it at every age, no age is immune.

It is true that they’re less likely to have complications as a whole. But when you start to break it down, country by country, you’ll see that the United States, as I mentioned, is a little bit different in the numbers we’ve seen here compared to elsewhere. I’m not talking about total numbers. I’m talking about demographics as well. It’s not just affecting the elderly. Like it kind of mostly did overseas. Nah, no. We’re, we’re seeing it a lot different here. Cause I guess we’re just a bit different over here. Aren’t we no more arrogant, a little more careless and a little more worry free even though we shouldn’t be, you know my favorite saying, that’s come out of all of this is that for a country that doesn’t have universal healthcare American sure. Act like they don’t have to pay for healthcare with how we’ve been behaving during this pandemic.

And Rubio’s tweet is no different. He is out there tweeting at us, acting like, Hey, don’t worry. You’re probably not going to die from it. You just make sure you don’t infect the others. But if you do, if you do come down with it, you’re probably looking at a few thousand dollars in hospital bills. My insurance probably isn’t going to cover that. So even if best case scenario for somebody who has the virus, including children, suppose you get it. Suppose you make a full recovery and you have no lasting permanent side effects. Fantastic, good on you. But what if that’s the outcome, but you also didn’t have then what thousands and thousands of dollars in debt, how do you pay for that? How is that not a permanent injury from this disease? You know, maybe it falls on you. Maybe it falls on your parents or caregivers, whoever it is. There is no good outcome. Marco. There is no looking on the bright side because there is no bright side in a pandemic. We could have had real leadership. We could have had politicians stepping up and doing what they were supposed to do in terms of protecting their constituents, but much like you, they would rather tweet out idiotic messages and then head to the bank to cash. Those donor checks.