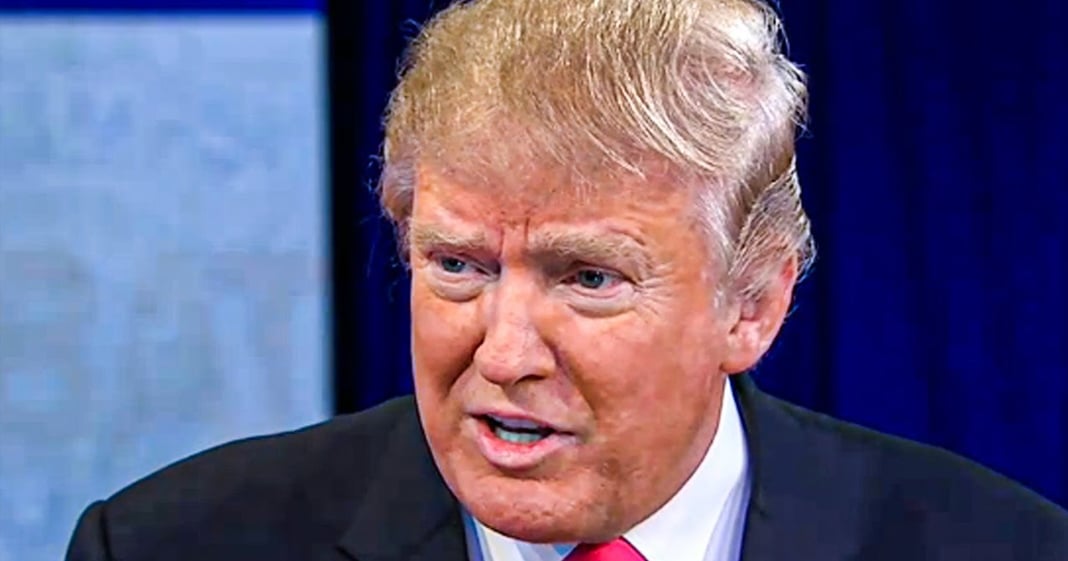 Donald Trump has been obsessed with eliminating the payroll tax for quite some time now, and the reason could not be any more clear: He stands to save millions of dollars, or more, per year by getting rid of this tax. The negative effect that it will have on Social Security and Medicare is just a byproduct of the President’s greed, not the ultimate goal. Ring of Fire’s Farron Cousins explains Trump’s motivation and why it likely won’t last long.

So over the weekend, Donald Trump signed a series of executive orders that are supposed to be providing aid, uh, for people in need, uh, due to the pandemic coronavirus relief package, if you will. Uh, but through executive order, because Congress can’t get their act together and agree on anything. And of course they’d like to go on vacation a lot. So they’re out of town. Trump’s also out of town, but he says, you know what? I can get the upper hand on this issue by signing these executive orders. I come out smelling like a Rose, looking like the hero, let me do this. Except the guy did it the wrong way. What he should have done is he June executive order saying I’m ordering the treasury department to immediately start sending checks to every American citizen. I am extending the unemployment benefit. Uh, and then we’re going to call it a day.

But instead he decided to use this opportunity to give himself a tax cut. That’s what he did. That’s what he did with this grand power there’s grand opportunity that he had to win back the heart of the public, possibly even win back majority support before the 20, 20 presidential election. And he blew it and he likely blew it in an illegal way. And he blew it because he’s greedy as hell. Here’s what happened. As we all know, he issued a temporary, uh, payroll tax holiday through executive order. So what this means is that the payroll tax, which is typically just a couple of bucks out of every check of yours, uh, it’s a lot more money though, for those in the top 20%. Uh, in fact, they reap the most benefits from it and corporations, of course, cause they pay half of it. Um, they now have a tax holiday for that.

So you, the individual, you’re going to save a couple bucks, a paycheck. Some people may not even notice it because it is such a small amount, but then at the end of the year, you have to pay that money back. So it’s actually going to screw you over really bad. Uh, somewhere along the lines, instead of paying, you know, 10, 20 bucks per paycheck, you’re going to have to make a three, $400 payment by the end of the year, when you have to pay it all back and that’s going to suck, that’s really going to hurt people. Uh, one of his executive orders did re extend the unemployment benefits, but instead of 600 a week, it’s only 400 a week, 300, which has guaranteed. He wants States to pick up the other $100 a week of it. Oh, and by the way, in order to pay for it, he’s stealing $44 billion from FEMA during the heart of hurricane season.

Like we just saw a hurricane slash tropical storm, just go right up the Eastern seaboard, just causing all kinds of death and destruction along the way. And this guy sitting there like, Hey, we’ll just take 44 billion out of FEMA. What are they doing right now? No, this, this is FEMA is busy time of the year. This is the time when they need that money. Uh, but instead you’re doing it because you think it’s going to buy you some now obviously as every single person, uh, on the left and right has pointed out taking money from the payroll tax. So essentially cutting the payroll tax between now and the end of the year, that is going to cripple social security. That’s the main funding mechanism for social security. If you get rid of that, you have essentially effectively defunded social security. And Trump promised that if he is reelected, he is going to extend this payroll tax cut.

And his real goal was to give himself a tax cut. That’s what he did. He signed this executive order to give himself a tax cut. That’s why he and he alone has been pushing for the payroll tax cut for months. Even other Republicans in the house. And the Senate have told him, this is a stupid idea. You don’t need a payroll tax cut. The public’s not going to see any of it. Why would you bother doing this? And the answer is simple idiots because he owns a massive multibillion dollar organization that pays millions of dollars a year in payroll tax. And he wants to put those millions of dollars a year back into his pocket. It’s honest to God. That’s simple folks. That’s why he signed that executive order. That’s why he’s been pushing this for months. That’s why he refused to let it go.

Even when the rest of the Republican party told him, it was a stupid idea. He did it because he’s going to profit the most from it. The top 20% of income earners here in the United States are going to pocket nearly 70% of this payroll tax cut. That’s what this is. They didn’t do it because it killed social security. That’s just a happy accident for them. But I do want people to start looking at these things a little bit more, you know, in depth, we know Republicans have wanted to kill social security for quite some time. They want to give that money over to wall street to appease their wall street donors. And that would kill it. Uh, wall street sucks with money, but Trump would not just straight up sign an executive order to defund social security in the middle of an election year. He’s dumb. He’s not that dumb. Nobody’s that dumb Matt Gates might be, but I don’t know about anybody else, but otherwise that’s not why he did it. So please stop saying that he did it to kill social security. No, he did it for a much simpler reason.

Did it because it’s going to put millions of dollars in his own pocket. It is going to increase the net worth of his businesses by a few million dollars. His resorts are going to bring up a little bit of extra money now because they’re saving that money. And unlike you on like the average person out there, when a business gets even a temporary tax holiday, even if it’s for six months, six months, they don’t have to pay taxes after that, they have to go back and pay it back. Do you know what they do during those six months, they get to invest that money. They get to make money off of that money. So by the time they have to pay it back, they’ve still made a profit off of it. That’s what’s happening right now. Folks that’s what’s about to happen. That’s what this executive order was all about. Is there a silver lining? Hell yeah. There’s a silver lining. Let’s talk about the positive. The positive is that he can’t do this. All right. That’s straight up illegal for the president of the United States to get involved in, uh, uh, taxation issues.

They’re going to say, look at this. He did the thing that Democrats wouldn’t do. The Republicans in the house and Senate wouldn’t do it. Trump did it. He delivered and that’s going to win him some votes. He hopes. And it could because this stalemate that we have going through Washington D C right now, cause Republicans want to give everything to corporations, nothing to people. Democrats want to give a little bit to people in the rest of corporations that, that doesn’t work. That doesn’t work at all, but that is what is happening in D C Trump attempted to seize on it. But luckily the man is so incompetent that he wasn’t able to put together a really coherent executive order that actually helped people. And he did one that instead very clearly puts millions of dollars in his own pocket. Oh. And by the way is likely illegal.