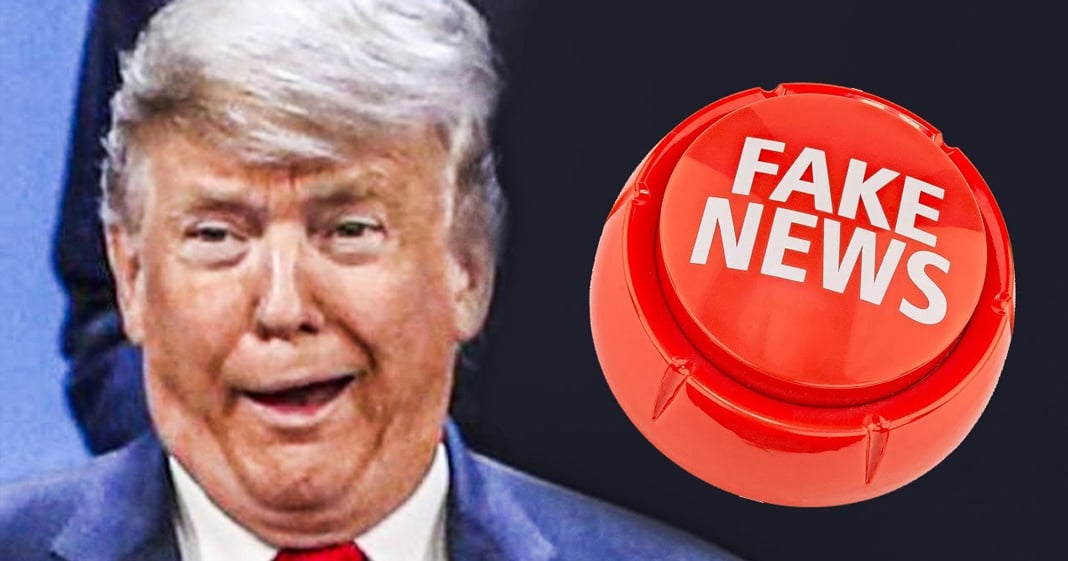 Cue the freakout from the right wing “free speech” brigade: Facebook and Twitter have been forced to pull content posted on official Trump social media accounts because they were spreading misinformation about COVID 19. Republicans are going to use this as further proof that these sites have a bias against conservatives, but the reality is that they have a duty to prevent incorrect and dangerous information from spreading across their sites, otherwise they could lose their legal protections. Ring of Fire’s Farron Cousins discusses this.

Towards the end of last week, Facebook and Twitter both took the extraordinary move of temporarily suspending, uh, Donald Trump’s re-election accounts from their respective platforms because the account was spreading misinformation about the Corona virus and children. Here’s what happened, uh, the, a team Trump Twitter and Facebook accounts, which are official Trump affiliated a reelection accounts. They posted a video late last week of Donald Trump appearing on Fox news on Wednesday, where he said the following. He said, quote, if you look at children, children are almost, and I would say, almost say, definitely, but almost immune from this disease, they don’t have a problem. They just don’t have a problem. Uh, so what he’s saying in this video clip on Fox news is that children are almost immune. And he says, I would say, definitely immune from COVID-19, uh, that’s not true. That’s not even close to being true.

That that’s nowhere even near reality, but he said it. And he has to say things like that because he wants to convince us that it’s safe to open schools, even though a lot of schools that have already opened have now had to reclose, because guess what? They’ve had massive outbreaks of COVID-19 gee, who could have predicted that. Nevertheless, Trump has to continue the lie and he has to convince the public that his lie is reality. Reality’s against him on this. And now luckily, so are the social media outlets. You know, I am not a huge fan of censoring, a dissenting voices on social media. But I do think that these social media giants have an obligation to the public. They have a duty to block content like this, and that is what they did essentially. They told the team Trump accounts, if you do not delete this video, or actually until you delete this video, your account suspended, you can’t do anything. You want your privileges back. You want access to people back, delete the video, filled with misinformation and you’re backing full privilege. No problem. There you go.

First of all, to address the non social media issue of this, the COVID-19 issue in children, we have over 90,000 children in the United States right now, right? This second, who have this disease, children are not immune from it. Not at all. Now, some science has suggested that it is less likely that kids are going to get it because the proteins that this virus typically likes to bond to are less prevalent in the bodies of children. They still have the proteins. So the virus is still capable of bonding to them and it does. And it will. It just makes it less that it will happen. They are not immune to it. They are just as susceptible to the side effects to the dangerous problems created by COVID-19 as the rest of the public. As far as we know right now, we have seen children die from this.

We have seen children kindergarten age die from this first grade, second grade, all the way up through college folks, children are not immune from this. Nobody is immune from this. Some people can get it, not have symptoms. That’s wonderful for them. That’s great. But what Trump is spreading here is an absolute lie. Now onto the social media issue. As I said, not a huge fan of them, you know, censoring somebody because of their political views, that that’s definitely wrong, but that’s not what’s happening. And in fact, that’s really not ever what’s happened when you break the terms of service to these things, you agree to whether you actually agree with them or not, you can be banned. Yo it’s the whole no shoes, no shirt, no mask, no service. These companies, whether we like them or not do have standards in place that say, Hey, you want to be a part of this.

You have to follow these rules. You want access to everybody that Twitter has to offer everybody that Facebook has to offer. You have to do these things and you cannot do these other things. You do the bad things. You lose the access. That’s not censorship. That’s saying, Hey, you were told you chose to ignore those warnings because you didn’t read the warnings. And that’s consequences. The people who bitch and moan about that are the people who typically get to go through their lives without having to deal with consequences. And suddenly they’re furious that their little privileged life, Oh my God. Why am I not having no shut up? You were told not to do the thing. Now you can’t do the other thing, which is get on Facebook. Oh God, what a punishment. Right? You know, you’re not losing any actual rights. Nobody has a right to Facebook.

Shut up. Nevertheless, the companies are also doing this to essentially protect their own asses right now. Uh, under section two 30 of the, I think it’s the telecommunications act. These organizations are 100% immune from any kind of prosecution or lawsuits for anything posted on their sites. Meaning I can go on there. Post the most horrible, ridiculous things, threaten whoever I want. If Facebook, Twitter, they couldn’t be held accountable or liable for that at all. Even if they saw it, didn’t take action. They can’t do anything, but they’re starting to lose some of their section two 30 immunity and conservatives do want to take that all the way away. And honestly, I am in favor of that. I do believe that they should lose their section two 30 protections because we have seen too many instances where horrendous have been planned on Facebook. Facebook is able to see these things and they don’t.

They just, they just let it go. They have a duty, you know, just like we have a duty to follow their rules. They have a duty to follow the rules as well. They should not have immunity. I don’t think immunity should exist ever for anybody. Nobody should be immune from anything. That’s ridiculous. Anytime somebody is immune or a company is immune. They end up abusing that power. Right? We were seeing that happen right now with the social media outlets. We’re seeing it right now with a president who thinks he’s immune from prosecution. And we’ve seen how he’s escalated his behavior since effectively being told by Republicans, you’re immune from prosecution. That’s the kind of thing that happens. That’s the kind of thing we have to avoid. And that’s the kind of thing that immunity breeds. So get rid of it. We have a duty. We, the public have a duty to make sure that these social media outlets are not censoring views based on politics alone, that cannot happen.

They cannot sensor something just because it’s, you know, little out there, you know, just because it’s radical. But if it’s calling for violence, if it’s actively spreading misinformation, that is going to get people killed, then yes, you have a duty to remove that kind of content. But when you step over and you start removing anything beyond, you know that parameter, then you are policing the speech and that is wrong. Even though you’re a private business, you should not have the power to do that. The problem is we are not ever going to be able to get these companies to operate inside any kind of parameters they’re going to have to be broken up. There’s going to have to be tighter regulations. There’s going to have to be somebody looking over their shoulder because until there is, this is just essentially the wild West. And as long as it’s the wild West, this company, Facebook, Twitter, they’re all going to do things that are going to cause conservatives to piss and moan about censorship. When in reality, just like Trump’s post last week, you broke the rules and your rule breaking by the way, spread misinformation that could easily get people killed.