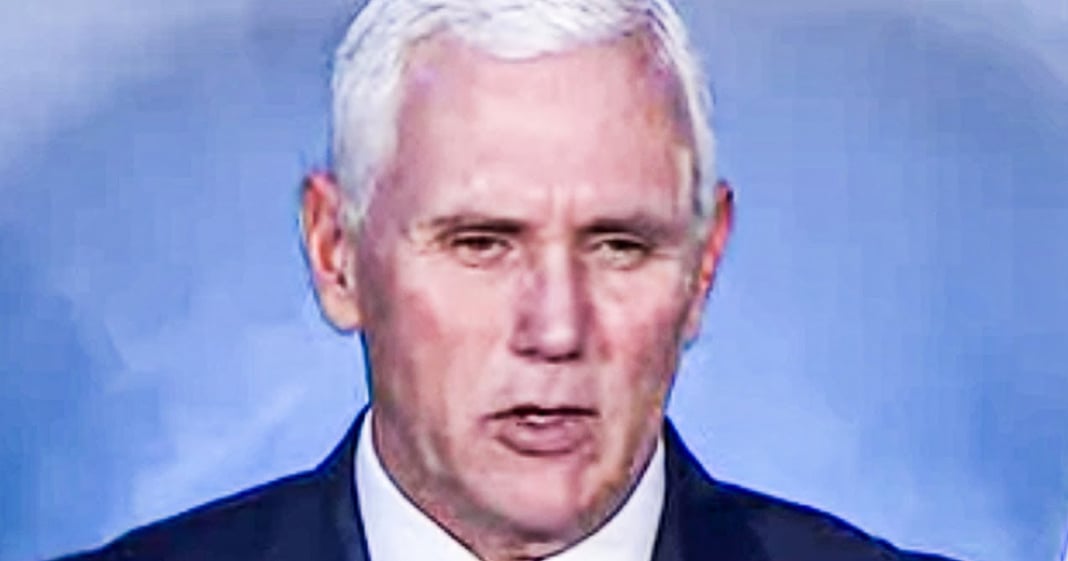 Mike Pence is on tour right now in red states, trying to drum up evangelical support for Donald Trump’s reelection. But his pandering to these low-information voters has had an unintended side effect – these people now view Pence as a “loyal and submissive” wife to Donald Trump who does all the work while the man gets all the credit. They actually mean this as a compliment, though its really hard to see it as such, as Ring of Fire’s Farron Cousins explains.

Vice president. Mike Pence has made two trips to Florida within the past two weeks speaking to evangelical groups and trying to get that much. Ballyhooed part of the Republican base energized about re-electing a heathen like Donald Trump now in his little speeches, Mike Pence obviously does not refer to Donald Trump as a heathen, but let’s be honest if you’re going out there talking to Christians, talking to evangelicals, people who believe that God dictates every part of their life. That’s a tough sell. That’s a tough sell to say that, Hey, this Trump guy, uh, this is who God wants. I mean, you know, cause nobody’s perfect and he’s imperfect and that’s what God wants to, uh, I don’t know how the sales pitch works. I just know that for some weird reason, it actually does work. But here’s the thing it’s having an unintended side effect here. Um, cause Mike Benz, uh, Mike Pence is out there making the sale and he’s talking to evangelicals and he’s always been, you know, the evangelical rock within this administration.

And uh, I just have to read it as one evangelical, put it last week. This is, this is how they view Mike Pence with his role with the Trump administration. Mike Pence is a wonderful gentleman. This is probably a very bad analogy, but I’d say he is like the very supportive submissive wife to Trump. He does the hard work and the husband gets the glory now. And obviously Trump’s had a lot of wives, so sure. Why not have a loyal and submissive one that also happens to be a elderly man. Why not right to each their own. We’re not here to judge. Uh, but here’s the thing. That’s how Republicans or some evangelicals I should say. Ah, that’s how they view. And Mike Pence, because really that is Pence his role right now. He is out there being the loyal servant. You know, let’s not call them a wife. Let’s not get involved in that, but he is being the loyal servant to the master because that is more of what this relationship is. This is master and servant. Servant goes out, spreads. The good word of master tells people how great master is tells them they should follow master the way that he does. Because look at me, I am happy. I am joyful. I enjoy my lot in life. I am thankful. I am grateful. Master provides for me. And he will provide for you too.

That’s the message. Pence is having to go out there and sail us South. It’s terrifying. It’s really, really awful, uh, to think about that. But that is what this is. And to be honest, the evangelicals, this person here, who said the thing about him being the loyal submissive wife, it wasn’t an insult. That was a compliment. Like that was the nicest thing this person could think to say, and they loved it. They believed it. And they hoped that Pence likes to hear that. No, nobody wants to hear that they are the submissive servant. Essentially he could be an equal, but Mike Pence doesn’t have that kind of spine with him. This was an insult, but not to Mike Pence. This was an insult to wives across the planet. They’re not supposed to be loyal and submissive. I’m sorry. They’re equals in a partnership. You know, that’s who should take offense to this?