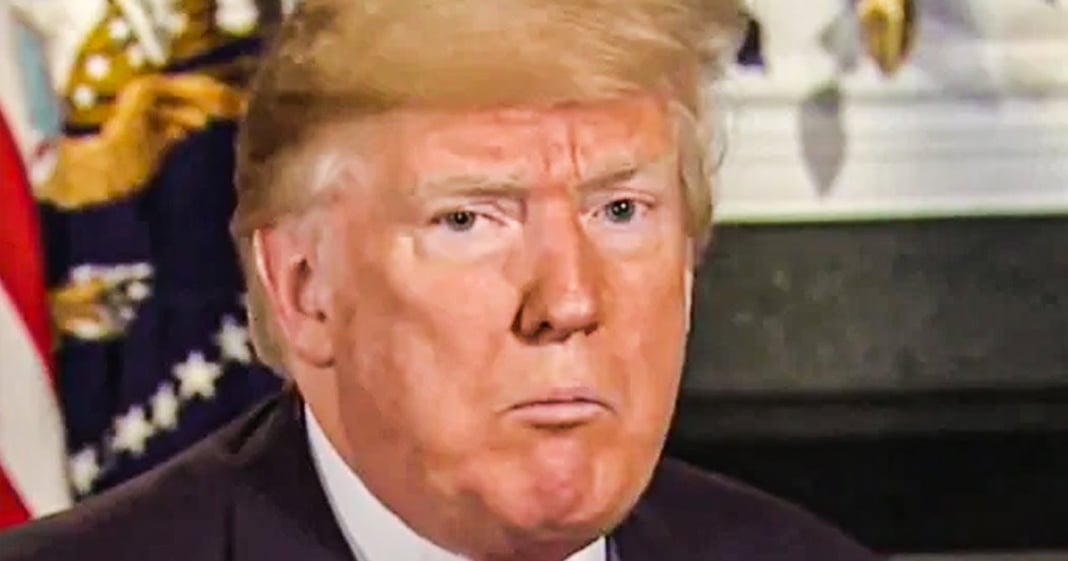 A few days ago, right before Donald Trump’s erratic executive order spree, Deutsche Bank decided to finally comply with subpoenas from investigators and prosecutors in New York by handing over Trump’s bank records. This could help explain why the President has taken on a much more desperate tone in the past few days, acting as if he is running out of time. Ring of Fire’s Farron Cousins explains what’s happening.

So in case you haven’t noticed a Donald Trump’s been acting a little strange recently, and I, I know that’s, you know, he’s always strange, but in the last week or so we have seen a dramatic shift in his behavior. He is becoming more erratic. He’s becoming more unhinged and he’s actually taking steps that make it seem like he wants to do something, but he just continuously fails to do it. That’s pretty much the case. We saw this past weekend with his executive orders. He wanted to make it look like he was doing something to help out with the pandemic. But really it was just a bunch of us. Self-serving executive orders, uh, meant to either line his own pockets or bribe people into voting for him. But there’s a reason folks. There’s a reason why all of this suddenly happened this past weekend. It’s not because of the election. It’s not because of the,

Was it Cause the president needed a good distraction. And the reason he needed a good distraction is because late last week, Deutsche bank handed over Donald Trump and the Trump organization’s banking records to investigators in the state of New York. We had a da Cyrus Vance up in Manhattan finally, after trying for what I think well over a year, got those Trump and Trump organization banking records because the, which bank finally decided to go ahead and comply with a subpoena after the courts finally told them, yeah, you pretty much have to comply with the subpoena. Now there were loopholes in that Deutsche bank didn’t want to fight them. Trump’s people, uh, I guess did not file any kind of suits or any kind of suits that would have gone anywhere. So Deutsche bank said the jig is up. We gotta turn the documents over. Here you go, Cyrus Vance. And Vance announced last week, week before, whatever it was that he is essentially looking into Trump and trunk organization.

Now Trump organization, excuse me, for things like bank fraud and even possible insurance fraud, uh, which could be, I don’t know this, but this is just one potential. When you’re dealing with bank records, uh, the potential insurance fraud could be, if Trump had overstated the value of his assets on these financial records, he would have been able to take out more insurance on them. And if something happened to them, he would get a bigger insurance payment. Even if the property was not worth that because he had put on paper that it was in fact worth that. So that could be where the insurance fraud came from. We don’t know that for certain. We don’t even know if there’s any insurance claims right now. We don’t know a whole heck of a lot about what’s happening with this particular investigation. But we do know a few things.

We do know that Michael Cohen in his testimony to the house of representatives said that Donald Trump overstated his net worth to the banks in order to get them to loan him money. And he understated it to the IRS to have to pay less in taxes. That’s that? So his real net worth, apparently according to Cohen would be somewhere in the middle. Cohen’s been in trouble for lying to authorities in the past. So we also have to take what he says with a grain of salt. We’ll know once this investigation ends, whether Cohen was telling the truth and whether Donald Trump overstated or understated his assets in any kind of way, that does cross the line into criminal. And I say that because there’s a chance, cause there’s always a chance cause we gotta, you know, play it legally cool. Here. There’s a chance that did happen, but it was unintentional and they’re able to prove it was unintentional. We won’t know. Do I think it was unintentional? Absolutely not. The man wanted to do whatever he could to save a couple of bucks here or there everywhere money, money, money is all he thinks about, but [inaudible] has the records now. So if Trump seems a little erratic, if he seems a little angry right now, that’s probably why probably because he understands that whatever it is, these New York investigators are looking for. If they’re going to find it, they have the tools they need now to find it.