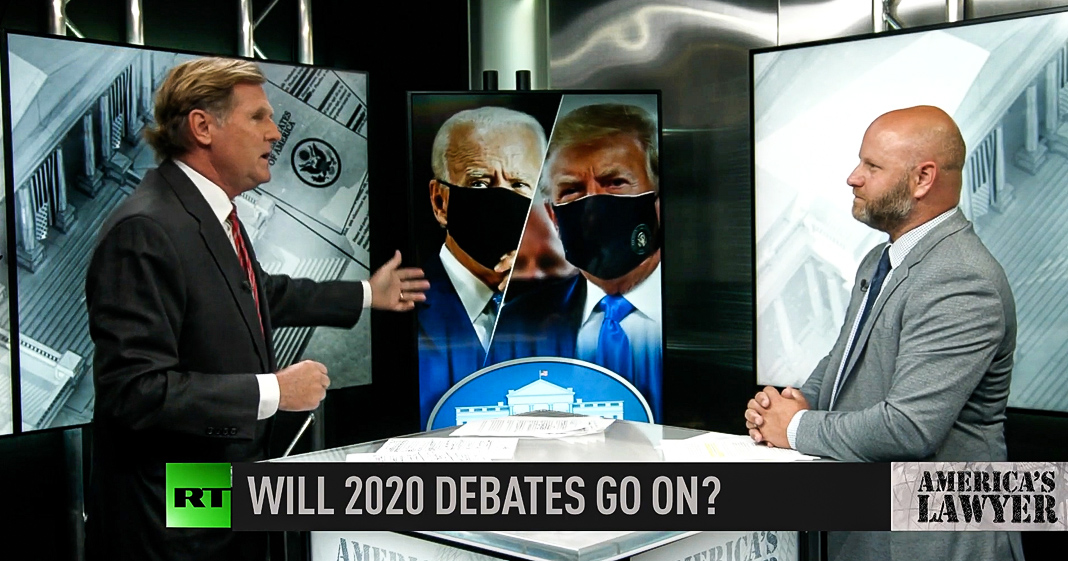 Via America’s Lawyer: Democrats aren’t sure that Joe Biden can keep his lead in the polls if he has to debate Donald Trump on TV. Mike Papantonio & Farron Cousins discuss.

Mike Papantonio: Democrats aren’t sure that Joe Biden can keep his lead in the polls if he has to debate Donald Trump on TV. So, Farron they’re actually advising him, don’t show up. Don’t do any, any debates. The visual I have of this and I’ve actually seen kind of a cartoon rendition is Biden in a closet, sweating and he’s tear, you know, he’s terrified. And then out in the oval office is Xi Jinping from China, and he’s got a crisis. In other words, the point is, if you’re going to do this now in a debate, what are you going to do when the rubber meets the road and we got big problems? That’s the way the right’s going to play this.

Farron Cousins: Right. And, you know, about a year ago, news stories started coming out, just kind of here and there, sources inside the white house said that Trump was considering skipping the presidential debates. And this was at a time when it looked like it was going to be anybody but Biden as the democratic nominee. And he said, well, it’s because the networks are unfair to me. Now, fast forward, obviously 12 months, Trump wants more debates now because he sees who his opponent is. And you have Joe Biden and the establishment centrists writing think pieces saying, no, Joe Biden shouldn’t go because Trump’s just going to lie. And Joe Biden’s better than that. Trump doesn’t deserve to be on the stage.

Mike Papantonio: Is that really their argument?

Farron Cousins: That is what they’re saying. I read it this morning. It was sick, because look.

Mike Papantonio: That, wait. Trump’s going to lie. Therefore we’re not putting little Joey out in a debate stage.

Mike Papantonio: Okay. You see what the right’s going to do with this right?

Mike Papantonio: I mean, every ad we see is going to be somewhere where Joe Biden is held up like a little sissy, sissy girl, hiding in a closet while there’s some threat to the United States. Because they’re going to say if he won’t even, if he won’t even debate Trump now, what’s going to happen in the real world? I can’t believe somebody says, this is a good idea, but his advisors are telling him, yeah, this is a good idea. Don’t show up.

Farron Cousins: Right. It’s to the point where on Monday, Elizabeth Warren had to come out and she says, no, no, no, no, no. He’s, he’s gonna debate. We, I, we, you know, we in the Senate, we are not telling him to not debate. We want him to go forward with this because Elizabeth Warren is smart. And Elizabeth Warren understands, there is no good way for Joe Biden to back out of this and keep his dignity. The, you know, that, that cannot happen. If they wanted this to actually be a thing, they could have laid the groundwork long before we knew it was going to be Joe Biden, but they didn’t, they could have done it in the early days of the pandemic, but they didn’t. Now it looks like Joe Biden’s doing great because he’s invisible.

Mike Papantonio: The numbers are closing. I don’t know if you’re watching it.

Farron Cousins: A couple of the polls have shown.

Mike Papantonio: The numbers are closing in.

Mike Papantonio: And we’re still a pretty good ways out. And for him to say, no, I’m going to sit here and, you know, bite my nails. Look what I saw, Bill Kristol of all people, this is Bill Kristol, who you might remember at the end of the Hillary campaign, he was one of her advisors, right? So Bill Kristol comes out and says, this is the best thing that could happen because we’re going to be able to spin this as, it won’t be fair. As you say, Trump is a liar. The American public doesn’t care anymore. This is just for media. This is just for ratings in the media. If you don’t think that most Americans want to see what happens on the stage, because look, what’s Trump been doing, Trump’s been saying the guys senile. He’s saying he’s cuckoo. He’s, he’s held up in his, in his, he’s held up in his basement. He won’t come out. This plays right into it.

Farron Cousins: Well, it, when we were just having the democratic debates, Joe Biden would say some horrible things. There were some really embarrassing sound bites from him where he couldn’t remember his own website name. He couldn’t remember certain events. He was telling weird stories at the time. And so he would only get high praise from people if he didn’t screw up during the debate and that only happened once or twice.

Mike Papantonio: Everybody’s going to want to see it. It’s like, it’s like a mud wrestling match man. So, but if you say, nah, he don’t want to show up and then they try to justify it with that nonsense, those nonsense, oh, the public doesn’t care. This is all from media. Trump’s going to lie. How stupid. You know what I got to tell you, go back and look at the, the last several before Obama, take a look at the advisors that were involved in, in, in, in making calls here. They have, the Democrats have a knack for bringing in these esoteric thinkers.