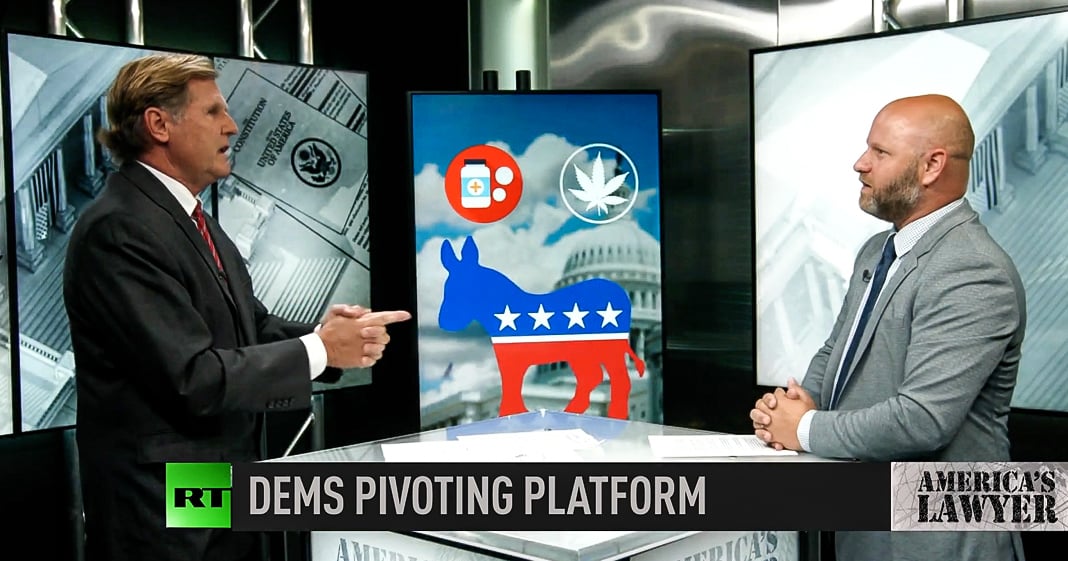 Via America’s Lawyer: The democratic party is working on their platform for 2020 and so far they’re voting against popular proposals to appease their corporate donors. Mike Papantonio & Farron Cousins discuss.

Farron Cousins: No Medicare for all, no legalized marijuana, which both of these are programs that are supported by nearly two thirds of the public. I think legalizing marijuana is even higher. I think that’s almost three quarters of the country says yes, do this, but Democrats and they’re framing it by the way, as their, their appeal to the suburban housewife. You know, Trump had his appeal.

Farron Cousins: Biden’s doing his as, hey, listen, I’m not gonna force you onto this healthcare. I’m not going to let your kids smoke weed. I’m not gonna let anything different happen to your life. I’m the one who’s going to preserve you. They always pander to the mythical suburban housewife. But what’s really happening, as you said, this is the way to keep the donors happy. To let the donors know, healthcare, we’re not gonna make you lose money because marijuana is legalized and people can use that as an effective treatment for so many things. That’s what this is about.

Mike Papantonio: Okay. So this is how it usually happens. We, we’ve done, we’ve been talking about this topic for so long. Democrats come out on social issues. They’re good on gender. They’re good on race. They’re, you know, they’re always out front on social issues. But what they always get away with because nobody pays attention is what they do to us on money issues. Like, look, you’ve got the vast, vast public that, that says it’s a good idea to have universal healthcare. We’re one of the few nations in the world, in the industrial, we’re one of the few industrial nations, we might be the only one. I’m not sure, but we’re one of the few that don’t have universal healthcare where you consider advanced industrial nation is what we would be considered.

Farron Cousins: You know, the way I framed this, when I had first talked about this, was the fact that the Democrats came in not having any opposition. They didn’t have opposition from the public. They didn’t have to worry about an opposition party. They came in with nothing but themselves and they still compromised. They compromised with nobody. There was nobody to make a deal with and they still somehow lost the deal.

Farron Cousins: That’s how weak they are.

Mike Papantonio: They think they’re ahead right now with Biden, right? And so that, if you think you’re ahead, why don’t you go ahead and reach and do stuff that might actually move the ball for the American public? For example, on marijuana 76% of Democrats, 76% believe that marijuana should be legalized. But oh no, we can’t do it. Why? Because Biden doesn’t want to do that. That’s one of his pet.

Mike Papantonio: That’s one of his pet peeves, I don’t want legalize marijuana. But I I’m just always amazed at the lack of courage that Democrats are always willing to show when they know that if, if at any time, this is the time when they can show it. Got 30 seconds, why don’t you wrap that up for me.

Farron Cousins: You know, people like to say, well, the Democrats are going to fight back against Republicans. The Democrats won’t even fight back against themselves. They are not strong enough to do this. They are not strong. They don’t care enough to come out with a backbone and say, no, listen, this is the right thing. The public actually likes it, Democrats and Republicans alike. Let’s do it.

Mike Papantonio: Do you know how many Koolaid drinkers are going to come out and attack you for saying that? Because it’s all tribal. They can’t think outside that little tribal thing that the MSNBC delivers on the nightly programs. This is all they can think about. You want to say, expand your thought process a little bit. Farron Cousins, thank you for joining me. Okay.