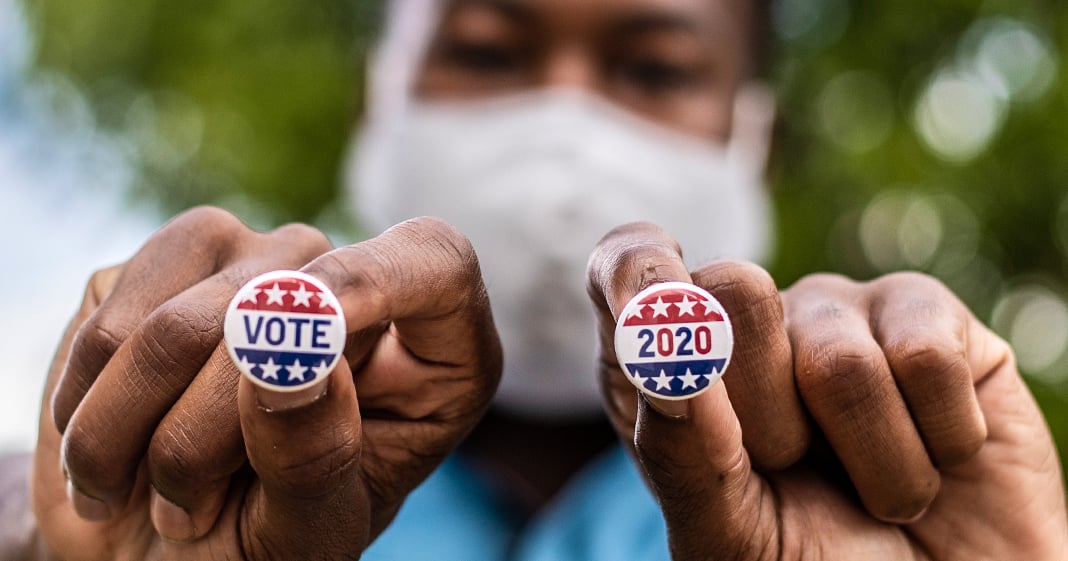 According to new reporting by Sludge, the Republican Party’s war on voting rights is being funded by a cavalry filled with shady billionaires and dark money PACs. These billionaires understand that they stand to lose a lot of power, and possibly lots of money, if more people get out to vote, so they will do everything in their power to prevent that from happening, regardless of how ethically wrong it is. Ring of Fire’s Farron Cousins discusses this.

The Republican party itself is involved in more than a dozen different lawsuits, challenging expansions of voting rights across the country. These are lawsuits that the Republican party has either filed themselves or lawsuits that their little affiliate organizations have filed. And the national Republican party has just filed briefs in supportive. They have joined into the lawsuit, but nevertheless, that’s a lot of legal battles in more than a dozen different States that the Republican party itself has involved in during an election year when they need to be kind of focusing all their cash on not losing the white house, the Senate and not having a horrible blue wave wipe out what few house seats they have left, all things, which by the way are being predicted. But they’ve decided that the better way to fight that was to spend their money, not promoting candidates or ideas, but to make sure you don’t have the right to vote.

How pathetic is that? By the way, let’s just talk about that for a second. We have a political party that finds it easier to take away your right to vote than it does to come up with a single good idea to get you, to actually support them. That’s how shitty the Republican party is. They would rather just strip away your constitutional rights than have to come up with an actual idea that would make you like them. It’s how unlikable they are. That’s pathetic. And that is what Republicans are. Republicans are pathetic because this is what they resort to more than a dozen different lawsuits. So the question is who’s paying the bills, right? The Republican party does have their legal fund, which is separate from their campaign money funds. So who’s paying these bills. Luckily we have wonderful organizations out there, uh, like sludge sludge is absolutely one of my favorite sources for, uh, independent investigative journalism.

And they’ve gone through the files. They have gone through the financial documents folks, and they have found out all of the millionaires and billionaires who are funding these right wing lawsuits from the Republican party to strip you of your right to vote. And let’s name the names you have John and Marlene Ricketts from TD Ameritrade who have given $321,000. Uh, Frank and Joe Fertitta from stations, casinos, uh, Lorenzo and Teresa Fertitta, both of which, uh, couples have given $213,000. Kelsey and Amy Warren from energy transfer partners, uh, Isaac and Laura Perlmutter from Marvel entertainment, Diane Hendricks from ABC supply Bernard and Wilma Marcus from home Depot, James Davis from new balance. Uh, John and Andrea Catsimatidis from a [inaudible] foods, United refining company, John Paulson from Paulson and co Phillip Ruffin from treasure Island, hotel and casino. Linda McMahon from the WWE, a Darwin decent from affiliated computer services also known as Xerox, uh, uh, Andrew Beale from Beal bank, Charles Schwab from Charles Schwab corporation, James Dolan from Madison square garden company, uh, Stewart Rahr from Ken Ray, which is Cardinal health.

Uh, Warren Stevens from Stephens incorporated, Joe Lyman from trilogy software and ESW capital, uh, Jude Reyes from Reyes holdings, Christopher Reyes from Reyes holdings, Ken Fisher from Fisher investments, Richard LA Frank from LA Frank, that is a veritable who’s who from different industries, funding, all of these right wing websites to take away your rights. So why are they doing it? Why are these people willing to pay for these lawsuits through the Republican party to take away your right to vote? Because they understand just like Trump admitted, not that long ago, that the more people turn out to vote, the worse it is for the Republican party. If you actively go out there and you exercise your right to vote, Republicans are going to lose. Trump admitted it, and these people know it. And they’re willing to spend hundreds of thousands of dollars, a piece millions of dollars collectively to make sure that you don’t do it.

So I think the best way to honor that is to make sure that you do get out there and you vote and you vote against every Republican can that you can cause that’s the second part of it. It’s not just get out there and vote. I am actively telling people to go out there and vote against Republicans. Notice the phrasing. I used their vote against Republicans, not telling you who to vote for what to vote for. I’m just telling you what the vote and against. Nevertheless, if they want to strip you of your right to vote, it means they’re afraid of you. They’re afraid of the power that you have and the best way that you can preserve it. And you can protect it is to exercise it because that power is essentially a muscle. If you’re not going to exercise it, if you’re not going to work it out, then you may as well let them take it away. Cause it’s just going to be useless either way.