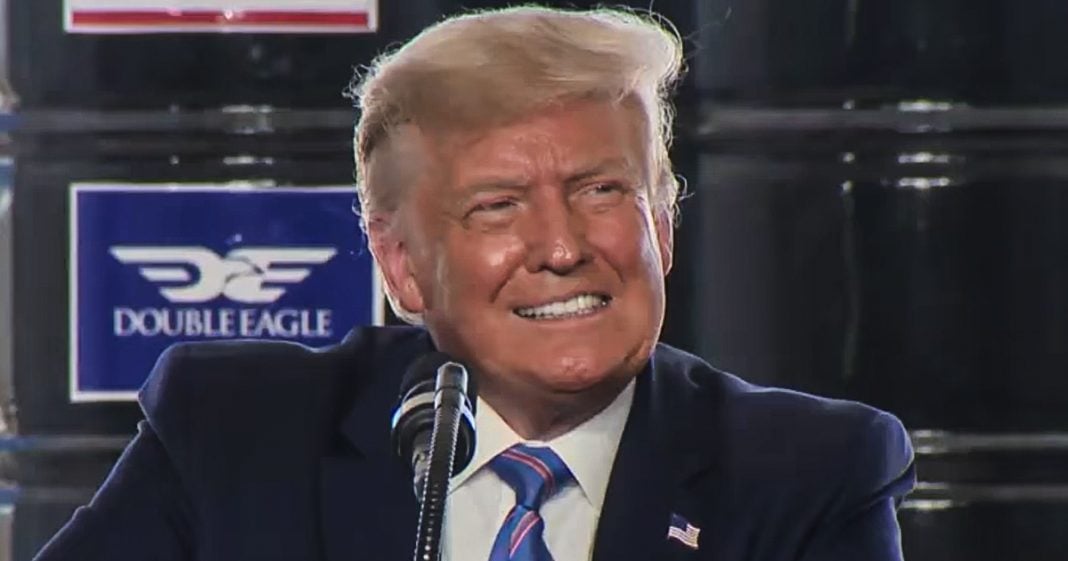 The polls might not be going in Trump’s favor, but focus groups of American voters certainly are. Throughout the year, media outlets like CNN have repeatedly held focus groups with swing voters to gauge where they are at with the 2020 election. And every focus group has showed the same, terrifying results – swing voters still prefer Donald Trump to Joe Biden. So are the focus groups the outliers or are the polls way off again? Ring of Fire’s Farron Cousins discusses this.

We all know that no polls right now are shut down. No, no polls conducted by a, you know, reputable pollsters here in the United States. None of them show Donald Trump winning the 20, 20 presidential election, uh, swing state polls have most of the swing States going to Joe Biden. Uh, even some red States right now are in a statistical dead heat. Those could go to Biden, swing voters in the polls say that they’re going to vote for Biden over Donald Trump. But then when you get to the focus groups, those same swing voters actually say they still prefer and are going to vote for Donald Trump.

Yeah, that’s a little weird. Isn’t it? During a recent episode, uh, on CNN, Michael, Smerconish actually talked about the fact that focus groups conducted all throughout this year for their network have repeatedly shown that a majority of swing voters, the ones that they talk to consistently say, they’re still going to vote for Donald called Trump. Now that’s pretty shocking, right? Cause the polls are telling us otherwise the polls say that ain’t happening. So here’s the question, which one is wrong? Are these swing voters who were in these focus groups, you know, talking to one another, are they actually lying to each other, taking a less popular opinion or the polls wrong? Do people lie to pollsters? Do people change their minds? After talking to the pollsters? Are we looking at another situation like 2016 where the polls get it wrong? Well, it’s worth mentioning that the polls did not in fact get it wrong in 2016, Hillary Clinton did in fact win the popular vote.

She won it by more than 3 million votes. The polls were right. They just weren’t right with the electoral college. But in terms of percentage of votes, they were accurate. And they’re accurate now too, because it’s also important to remember about CNN. Yeah. They love to do these little focus groups. They’ve loved to do them during the Trump administration. Uh, but one thing that’s been exposed is that these aren’t actually swing voters. These aren’t independent thinkers who were just waiting for the politician to sway them over to your side. Uh, most of them are hardcore Trump supporters and they continuously, as we have reported go back to the same people over and over and over and over and over again. CNN, perhaps desperate for ratings is trying to create some kind of, you don’t want to call it controversy, trunk controversy, excuse me. Cause it’s not a controversy.

Uh, but they’re trying to create some kind of doubt about the 2020 presidential election. Oh God, maybe it’s secretly is going for Trump. Let’s run this story about our focus groups that have already been exposed as complete frauds. Now don’t get me wrong for a second folks. I do not think at all that Joe Biden has this in the back. I have repeated. These said that. I think at this point he is likely going to win, especially with the democratic party out there, actively trying to get the debates canceled. Um, because that to me was always going to be the thing that took Joe Biden down. If you don’t have the debates, Joe, Biden’s got this. If you have the debates total toss up, but CNN as expected is being intentionally dishonest here to try to convince you to keep tuning in, Oh, maybe the polls are wrong.

What are they going to tell? Oh, I got to say, hang on. I got to stay with this. I can’t, I can’t turn it off. This is no, it’s a lie folks. It’s a lie. These focus groups that’s reconnaissance was talking about. I’ve been exposed as frauds. They’re using the same Republicans over and over. They’ve used people who are like the leaders of local chapters of the Trump campaign and labeled them as swing voters. No, don’t believe this crap don’t rely too heavily on the polls either. Don’t get complacent. Don’t think any candidate has this in the bag because trust me, they don’t all I’m telling you is that CNN is desperate for ratings and they’re going to cook up whatever kind of, you know, fake story here that they can to get you to tune in. Their little focus groups are total complete lies. Don’t fall for their crap. Whenever they talk to you about a focus group.