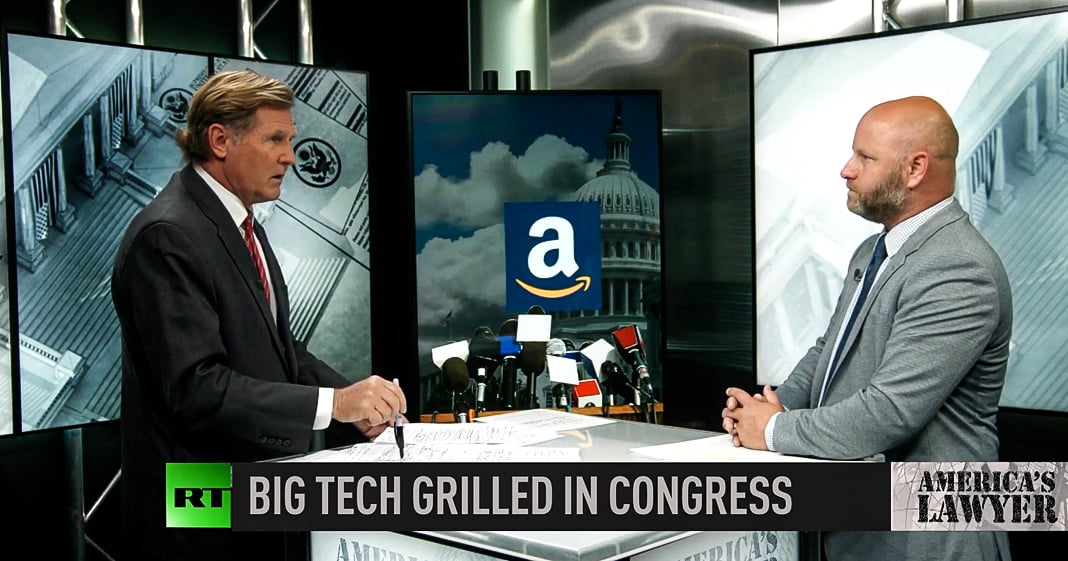 Via America’s Lawyer: Big tech leaders from Apple, Amazon, Facebook, and Google appear at the center of congressional hearings focused on whether these companies are stifling competition and free speech. Mike Papantonio & Farron Cousins discuss.

Mike Papantonio: Last week CEO’s from Amazon, Facebook and several other tech giants appeared before a House panel to defend their business practices and answer some really tough questions. Joining me to talk about that is Farron Cousins from trial lawyer magazine. Farron, you know, as I watched this, I was surprised at one thing. It was almost, it was almost a bilateral kind of attack on these folks, wasn’t it?

Farron Cousins: It was and, you know, occasionally, it is nice to see them actually working together, especially against this particular industry. This is one that Congress, you know, the federal government at every level has allowed to run rampant for, for 20 years almost when a lot of these companies were first getting started. And now they’re trying to play catch up. And I think that’s part of the reason we see Congress kind of uniting together against this because they let these, these giants now, grow and grow and grow and absorb every piece of competition along the way, or crush every piece of competition along the way. And now suddenly they’re staring down these behemoths because they didn’t address it at the time.

Mike Papantonio: Okay. So we’ve got a $5 trillion business. That’s what, this is $5 trillion. You’ve got what’s been described as a digital railroad problem. What that means is we’ve always handled antitrust cases against the railroad, against the steel industry. We’re not afraid to go, in the past, we have not been afraid to go after antitrust cases. This department of justice has failed to do it and the reason is these folks are spending so much. They’re, they’re just spreading so much money around. You know, the easiest thing to me is to go after them on, just absolutely say, look, your 230 right, your chapter 230 right is gone. Take it from there.

Farron Cousins: Yeah, absolutely. And for anybody who’s not familiar with the 230 protection, says that any of these giants specifically, really though the social media ones, Facebooks, Twitter, LinkedIn’s, they’re not responsible for anything that gets posted on their website. So if you go on there and you say something horrible, you issue threats, the platform itself faces no liability over allowing you to say that. And this is actually, this goes back to Bill Clinton’s telecommunications act. They included that as part of the telecommunications act that Bill Clinton signed into law. And a lot of what we’re seeing right now.

Mike Papantonio: It was a gift.

Mike Papantonio: It was take care of me, I’m Bill Clinton and I’m going to give this to you, which is crazy.

Farron Cousins: Well, and that’s a lot of the problems we see with these giants does stem from the Clinton administration. When he deregulated further the media industry, it included these soon to be giants.

Mike Papantonio: Okay, let’s talk about that just a second. Clinton comes in, I swear to you, it was about Clinton and the Democrats, and we’re going to get all this favorable press if we do these things. So what did they do? And go back to 19, what was it, 1980. I think there were almost sixty different independent news medias that, that covered the entire country. Now it’s down to three. Okay. That’s where it led us. So this is, they’re looking at the same thing here. You’re looking at this, this, at this machine that appears to be above the law. I mean, we can, they can just do whatever they, they create this nanny, you know, we now have this new nanny momentum. We’re going to decide what you can read and what you can’t read. If we find it offensive, you can’t read it. We’re going to censor it. This is out of control. And I was shocked not to see warm and fuzzy Jack from Twitter, not on that, weren’t you?

Farron Cousins: Well, I think Twitter, since they’re not necessarily gobbling up as many of their competitors as some of these other folks and they are, I believe for the most part, kind of strictly in the Twitter business, they have issues that have to be addressed. But I think that’s why they were probably excluded from this. Because with Amazon, Google, Facebook and Apple, of course, they also do other pieces of industry. And this was, I think the primary focus on the antitrust, which is, which is huge. Amazon, Amazon owns everything. You know, Amazon has security cameras for your home. Amazon has cloud computing. Amazon makes their own products and sells them, giving those priority over competition who also sells on their website. This, this shouldn’t be allowed and technically legally, it’s not.

Farron Cousins: But we didn’t stop it.

Mike Papantonio: Think about this. Okay. Bezos comes in, puts mom and pop operations out of business all over the country. Now that’s not enough for Bezos. Bezos now says, well, I’m going to see what’s selling really well. We’re going to look at our, at our metrics, what sells real well, then we’re going to build the same thing and make it cheaper. You understand? So he’s put, he’s put thousands and thousands of businesses out of business. Now it’s not, that’s not enough for him. Now even the people that ship directly that make these products, he says, I’m going to copy what you do and I’m going to sell it cheaper on Amazon. This guy is a machine that has got to be stopped and the DOJ needs to man up and say, look, we’ve done it on railroads. We’ve done it on steel. We’ve done time after time, banking, we’ve done it a lot of different ways. We got to stop this.

Farron Cousins: Well, and it’s funny too, because these companies all tried to use the same defense during the hearing and say, listen, but we’re American. We’re American companies. Don’t we want to make stuff in America? Don’t we want to prevent the Chinese, they said from, from taking over? I mean, they really dug their heels in on trying to claim to be the most American of Americans. But, but really a lot of the stuff they make, a lot of the stuff they sell, it is in fact not coming from America at all.

Mike Papantonio: Let me run this by you. I, it was almost a laughable moment. They, the, you know, CEO, CEO of Google, sir, look, let, let me talk to you about your censorship. Let me talk to you about what you’ve done to the left and to the right. Let me talk about how ridiculous your censorship is. The guy comes back and he says, oh no, it’s a coincidence. These are just algorithm mishaps. Did you hear that? It’s algorithm mishaps. Oh, there’s nobody over at, look, it’s happened to us, hasn’t it?

Farron Cousins: Right. We, we had a good segment. We were talking about arms deals to Saudi Arabia. Google would not let it show up. YouTube pulled it, which YouTube is owned by Google.

Farron Cousins: Because they said it was hate speech.

Mike Papantonio: Well, that’s not the only they’ve done it to us.

Mike Papantonio: We’ve had, of course, Sam Seder is a dear friend of ours. We know who they’re doing this to and they’re doing it, it is, it is the new nanny culture. And this guy with, with, with Google, he’s the nanny and he’s decides what’s acceptable and what’s not. It’s got to end. I hope they’ll keep pressure on here.