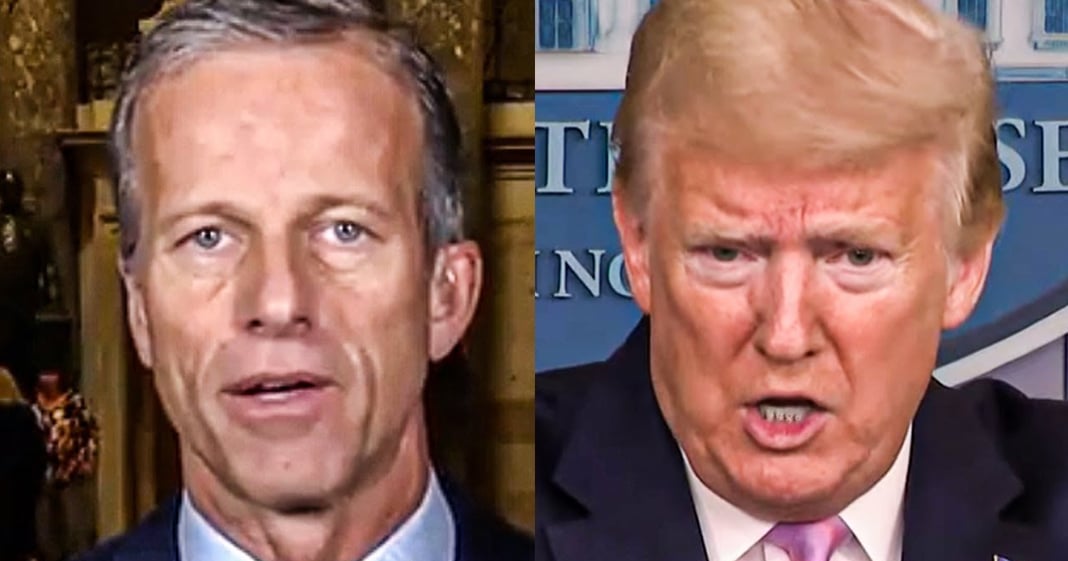 Both the Republican and Democratic conventions have now been effectively cancelled and turned into digital events, but the Republican convention has far more loopholes to jump through in order to avoid breaking the law. And according to Republican Senator John Thune, Trump is already planning on breaking the law with his speech. Trump has said he’ll be doing his portion of the RNC remotely from the White House, but that would mean that official government property was being used for political activity, and that is illegal. Ring of Fire’s Farron Cousins discusses this.

It was announced on Wednesday and Donald Trump in the white house reconfirmed it, uh, later in the day that Trump is going to be giving his Republican national convention. Renomination acceptance speech from the South lawn of the white house, federal property, government, property tax payer, paid for property. And he’s going to be giving his political speech at a political convention, supporting a political party on that government owned property. And according to Republican Senator John foun, who mentioned this to reporters yesterday, uh, in fact, I just, I really want to quote him. And this is what he said, quote to reporters, is that even legal? That is what John foun long time Republican Senator had to say about Trump’s

Decision to give his acceptance speech from the lawn of the white house, a publicly funded Mon federal federal property. Is that even legal? And that’s a great question, John phone, because it brings up something, the Trump administration loves to crap all over, which is the hatch act. We have seen damn near every major figure within the Trump white house violate the hatch act, including Kellyanne Conway, who was violated it so much that the white house ethics office actually recommended her firing. Trump, of course didn’t do it, but they said, listen, she’s a repeat offender. She keeps literally breaking the law. Uh, you need to fire her. They didn’t do it. Uh, but unfortunately in this particular instance, Donald Trump is not subject to the hatch act. Uh, neither is the vice president because according to the backwards ass way that this country wrote its laws, the president doesn’t have to comply with a lot of things, which includes the hatchback.

The president can do whatever the heck he wants with regards to that. He can use official taxpayer funded items and property to promote a political party, a political candidate, a political ideology doesn’t matter, even though we, the taxpayers from both parties paid for it, the president and or vice president can use that to promote their own personal policy agenda. But they’re the only ones that have that exemption. If a single white house staffer, a single person who salary comes from taxpayers helps out with this event in any way, while they’re on the clock. If they are being paid at the moment, if they help out, if they bring the present a glass of water while he is standing outside to give this speech, if they print out the speech, if they bring them a pen or pencil, so he can Mark it up before he goes on, that would in fact be an illegal violation of the hatch act of the United States.

This is not a smart decision on the Republican’s behalf, right? You need some kind of convention mounts, and it’s already going to be difficult to get that for either party because you’re not having an in person convention, which again is the smart decision. Do not have an imperson convention during a pandemic. You’re all idiots for waiting this long to cancel it by the way. And I’m going to repeat that probably several times throughout this campaign, but nevertheless, the Republicans needed to make sure that at the very least, all they did was not break the law during the Canva there during their convention. Right? I mean, that seems like a pretty low bar to hit to. Can we pull this off without violating any federal laws? And unfortunately for them, the answer to that question is no with Donald Trump as your nominee, it’s never a safe bet to assume that you can do something without breaking a law.