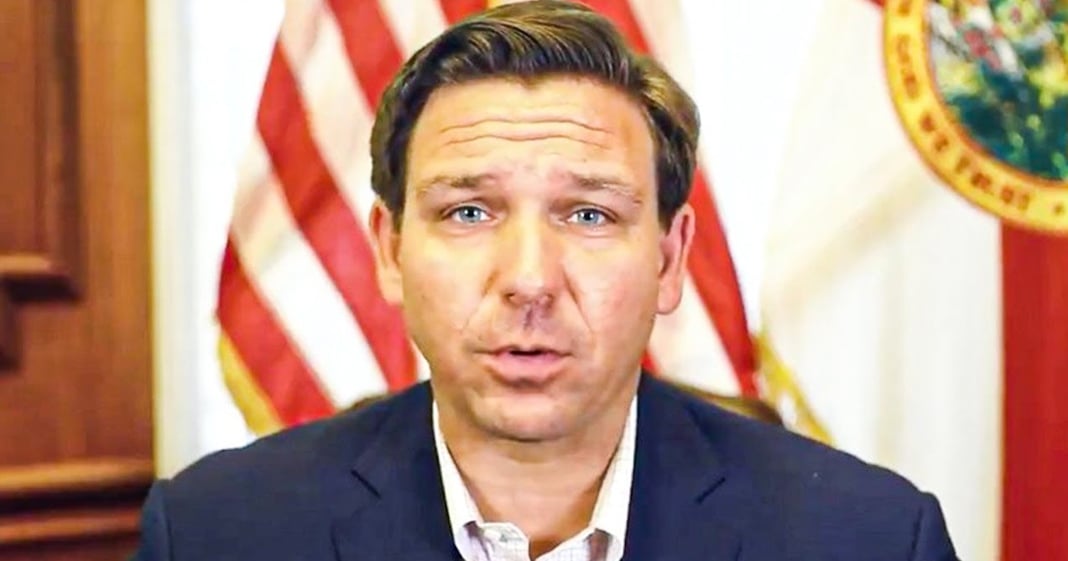 According to Florida’s Trump-loving Republican governor Ron DeSantis, the state’s unemployment system was designed to fail and to be as cumbersome as possible to those trying to file unemployment claims. He says that this was done intentionally by the previous administration in the state which was run by now-Senator Rick Scott, also a Republican. The showdown in Florida is now on, and the public loses regardless of which Republican side wins. Ring of Fire’s Farron Cousins discusses this.

Republican Florida, governor Ron DeSantis admitted this week during an interview with a Miami news outlet that his predecessor predecessors administration, I guess, uh, essentially sabotaged the state unemployment system, making it more difficult and more cumbersome for individuals in the state of Florida to actually apply for unemployment in the state. Now, for those of you familiar with Florida politics, uh, Ron DeSantis, his predecessor was in fact, Rick Scott, another Republican, just like DeSantis and Rick Scott actually now serves as a Senator, a us Senator from the state of Florida. And here we have a sitting Republican governor telling us that this guy guy is the one who sabotaged the millions of people who have attempted to apply for unemployment during the pandemic. He is the reason everything is so screwy, except DeSantis did go out of his way to say, I don’t know if it was him personally, but I do know that yes, somebody from that administration based on what I’ve seen has intentionally made this happen.

Uh, here’s the quote from the Santas himself here. Uh, I think that that was the animating philosophy. I mean, having studied how it was internally constructed, I think the goal was for whoever designed it, it was, let’s put as many kind of pointless roadblocks along the way. So people just say, Oh the hell with it. I’m not going to do that. And you know, for me, let’s decide on what the benefit is and let’s get it out as efficiently as possible. You know, we, we shouldn’t necessarily do these roadblocks to do it. So, so we have cleared a lot of those. Then he asked, he was asked like, Hey, uh, you do realize that you’re talking about a sitting us Senator from your state and another Republican, right. Is a Democrat. You’re pinning this on. And, and so do you say it to us then says, I’m not sure if it was his, but I think definitely in terms of how it was internally constructed, you know, uh, it was definitely done in a way to lead to the least number of claims being paid out.

So he’s like, well, I don’t know if he does guy did it personally. I mean, I don’t know if Rick Scott was the guy sitting there programming the state’s unemployment website. Uh, but yeah, they definitely a hundred percent like, what are you trying to say to say, it’s us now. Look, I agree with you, man. I agree with you a hundred percent. You’re right. Rick Scott’s administration did program this in a way to put up these needless roadblocks to prevent people from filing unemployment. So it looked like the state of Florida was doing better than it actually was. That’s the whole point of this. If you, where people receive unemployment benefits, fewer people are counted as such and it makes your state look like it’s doing better than it actually is while you don’t let anybody know that you’re actually sabotaging it. So fewer people can actually get the benefits.

DeSantis was perfectly fine with this, by the way, up until it became a massive problem and started garnering national headlines. That’s when he decided, Oh, crap, I have to do something about this. I can’t just sit back and say, ha ha. My state’s doing great on paper, but not in reality when suddenly you’re overloaded with a million people and the national media starts to pay attention. That’s what, that’s what DC has a problem with. Not that it exists. It was fine with it for a year and a half in office before any of this happened happened. But suddenly people, I started paying attention, suddenly the unemployment numbers skyrocketed and suddenly he was forced into a position where he had to do something. He had to take ownership. And the first thing he does much like his idol, Donald Trump is find someone else, anyone else to blame, regardless of the political damage that that could do to that person, Rick Scott in their future. Sure. That to me is the most delicious part of all of this, both the sands, this and Rick Scott can run for office again, but it’s going to be hard when somebody brings up in a couple years. Hey, remember when you blamed this guy for doing all this horrible stuff, Howard, why should we vote for him now? Because you said he’s off. Yeah. That’s going to be a hell of a lot of fun.