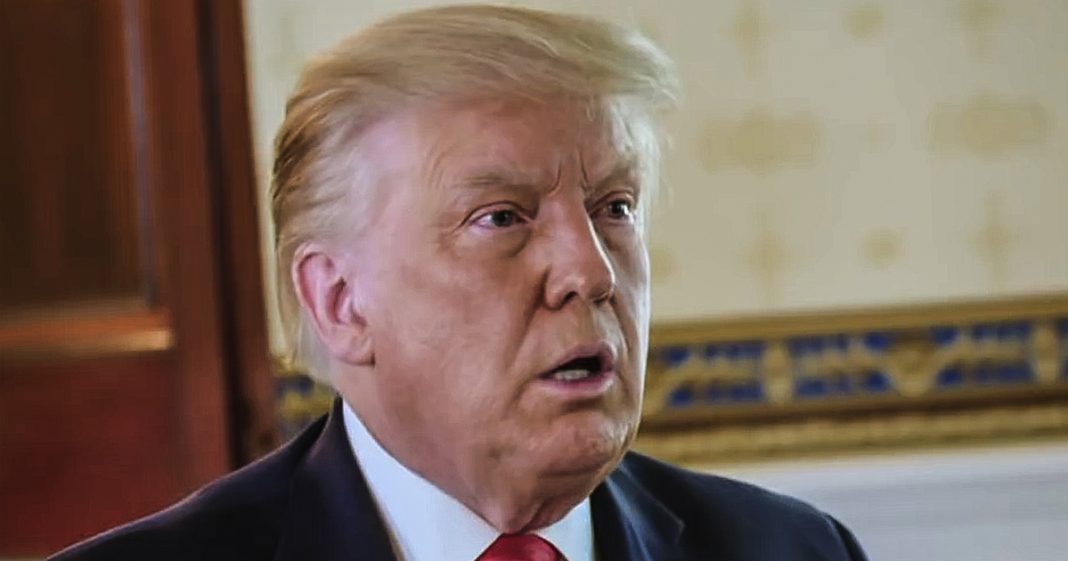 Donald Trump’s disastrous interview with Axios showed how ignorant he can be and how stubborn he is at accepting reality, but the biggest problem with the interview was that it showed that the President is still not taking it seriously. By bragging about how “good” we are allegedly doing, the President showed again that he believes we have a strong handle on everything, when, in fact, we clearly do not. Ring of Fire’s Farron Cousins discusses this.

So yesterday, uh, Axios released the video of the interview with a reporter, Jonathan Swan and Donald Trump. The thing immediately went viral. Most people who watched this were kind of shocked that Donald Trump was this callous and this, uh, uninformed, but in case you haven’t seen it, uh, here’s a quick highlight of that particular segment. Here it is. You test, some kid has even just a little runny nose, it’s a case. And then you report many cases. So we look like we have more cases than massive countries like China, which by the way, doesn’t report, as you know, I didn’t put any stock in jails fingers point is because we are so much better at testing than any other country in the world. We show more cases.

I, the, the figure I look at is death and death is going up. Now,

If you look at death, yeah, it’s going up again. Let’s daily death. Take a look at some of these charts. I’d love to, we’re going to look,

Let’s look at, if you look at death, start to go up again.

Well, right here, United States is lowest in numerous categories. Uh, we’re lower than the world, low, the lower than Europe in one in one, take a look right here. Here’s case death.

It’s surely a relevant statistic to say, if the U S has X population and X percentage of death of that population versus

You have to go by the cases first and foremost, I would actually like to point out that the way Jonathan Swan just handled that interview is how every single person that interviews anyone ever, that is how you do it. I cannot stress that enough. This is what we’ve been waiting for. Not just with Donald Trump, but really for any politician to just straight up, call them out for their BS to their faces. No fear, no quibbling around it. No like, well, actually I think no, Jonathan Swan was just like, what, what the hell are you talking about? No, that’s not true. That is how reporters, well, interviewers. That is how interviewers should be. You don’t have to be combative. But when somebody says something, you know, is not true, don’t dance around the issue, pull a Jonathan Swan and straight up say, what are you talking about?

Because that’s not real. I love that. And the second thing I love most was that Donald Trump is kind of seem like a little kid, right? Uh, he’s got a little charts, he’s got pictures and he’s flipping through them and he’s like, Oh, you’re not going to get me. I’ve got, I’ve got this chart here. And as you look at my chart, and even that Jonathan sounds like, yeah, no, that’s what, what you’re saying, doesn’t necessarily match this. Uh, but here’s the overall takeaway, right? It’s not just a Donald Trump looked like a fool. It wasn’t just a Donald Trump told Swan that no, you can’t measure that metric because that makes us look bad. The fact is that Donald Trump has, and this is what he proved in that interview. He’s managed to delude even himself about how bad the pandemic is. That’s how dangerous this situation that we are currently living in is even Trump believes his own lies at this point.

That’s the danger. That’s what puts us all in jeopardy right now, because he’s trying to put a positive spin on it. He told Fox and friends just this morning that I think I’ve done a great job with it. We’ve done a good job with Corona. He said, because he, honest to God believes that he has. He believes that we don’t have as many people dying as we actually do. Because when you look at his math versus the other math, Hey, it looks great. Right? And the best way to talk about that. And this is kind of what they were debating in that interview. There was that if you have a country that has a hundred new cases and five of those people die, the mortality rate is 5%. Yeah. 5% of people with a die. Whereas if you have a country like the United States, that has a hundred thousand new cases and a thousand people die every day.

Well, that’s technically only 1%. So yes, our death rate is better, but we also lost a thousand people. They lost five people. And that’s what Swan was trying to point out. You can use these numbers that are in fact accurate, but they are deceptive. They do not paint the full picture. And it’s very clear that this is what Donald Trump’s handlers in the white house have been doing to him. They’ve been saying, look, look, 5% of people who get it in this country are dying. 1% of our people are dying, but you have to look at it as Swan points out as an overall percentage of population. In which case the United States is going up, we are having the equivalent of a nine 11 every two and a half days with the total number of people dying. This isn’t getting better. And to be honest, I don’t think it’s ever going to get better. As long as we have an incompetent buffoon serving in the white house, who chooses to believe his own lies that we’ve got this whole thing under control. We don’t, he doesn’t. And he likely, never will.