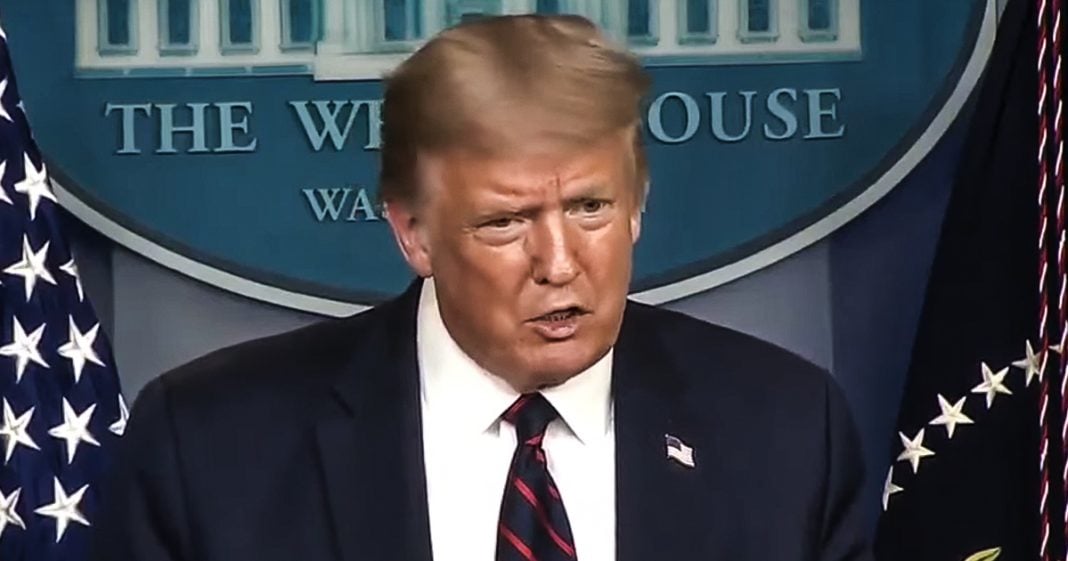 According to reporting from Politico, the Trump reelection campaign has hit such desperate times that they are now actively reaching out to non-campaign employees for advice. Meanwhile, the rest of the campaign is pointing fingers back and forth over who is to blame for the failing campaign activities. Ring of Fire’s Farron Cousins tells them exactly who they need to be pointing fingers at right now.

In a new report released this week by Politico in which they spoke to 15, uh, current and former members of this administration, as well as members of past administrations to kind of get a gauge on what is happening inside the Trump reelection campaign and why they’re doing such a horrible job. Why do they keep falling in the polls? Well, here is what we found out this week. According to this report, Donald Trump’s reelection campaign is so desperate for anyone to give them some direction that they have reached out to non campaign people they’ve reached out to Rudy Giuliani. They’re reaching out to Newt Gingrich. They are trying to contact anybody that they’ve ever talked to to say, what do you think we should be doing? Cause clearly nothing is working now. Giuliani and gang rich. According to the article, actually both told the Trump administration, Hey man, you just keep doing what you’re doing, do what you did in 2016, that that worked for you then.

So clearly it’ll work again because nothing ever changes anything ever, ever right now, the reason he’s doing so bad right now compared to 2016 is not even because he’s changed his strategy. He’s doing the same thing that he did back then with the exception of being able to hold rallies. And that could be playing a part in this, but here’s the thing, 2016. He ran as an outsider and he pointed out to people. Your lives are not getting any better. He made up a phony boogeyman as to why their lives weren’t getting any better. That boogeyman was immigrants coming into the United States, a vote for me. I’m going to solve that problem, your life, You to get better. None of that happened.

He ran as the outsider. He ran as the antiestablishment candidate. He didn’t fix any of the problems. He said he would because the problems that he blamed were not actually the problems. And now we’re in this position. You can’t run as an outsider. When you’ve been the president for four years, a majority of people in this country, according to the latest polls are not happy with the direction of this country. Majority of them at the end of the Obama administration were not happy with the direction. So they changed directions and went to Trump. They’re going to change directions again this year, you know, those public opinion, polls that have nothing to do with politicians, just your view of American life. Those are the ones that people need to be paying a bit more attention to. Cause those are even worse for Trump. So the question everybody has within the Trump campaign, according to this political article is who do we blame?

Right? Cause there’s gotta be somebody to blame. That’s how these folks operate. You gotta have somebody, you can pin this on. And right now they’re, they’ve come up with kind of two targets. The first one is coronavirus because as they put it, uh, you can’t attack COVID-19 with a tweet. You know, you can’t get into a Twitter, flame war with a virus. I don’t know if y’all know this, but COVID-19 does not in fact have a Twitter account. So kind of hard for Donald Trump to engage a, what he likes to call the invisible enemy. And the invisible enemy is kicking his ass. And the second person or thing that they’re blaming is Mark Meadows, Donald Trump’s chief of staff who came into this administration, uh, back in February, I believe. And according to her boards has spent a lot of his time crying because it’s in such disarray.

So they’ve decided to just blame the new guy who really I do his defense Mark Meadows. He was not a part of any of this, uh, horrible that’s than we have seen over the years. He was when he was in Congress. But as terms of just the disarray inside the white house itself, the dysfunction, the distrust that he is described, the fact that nobody wants to listen to anybody and all they want to do is fight. Like it is in fact, a reality TV show. Yeah, Meadows didn’t create that. He just inherited it. And apparently it’s, it’s brought him to tears on several different occasions, according to reports. So that’s where we’re at with this campaign, with this administration and with the entire reelection, as it stands right now, they’re trying to find somebody to blame. Some folks are telling Trump to stay the course, do the same thing you did in 2016, run as an outsider, even though you’re the most inside an insider could be a claim that this country is not great.

Say you can make it great again, even though most people at this point realize that if it’s not great, you’ve been in charge for four years. Therefore it is on you like your, the reason it’s not great. And that’s why it’s not resonating. He cannot win doing what he did last time. His campaign has to evolve. Think of Obama, right? Obama ran in 2008 on hope and change. Let’s hope for a better future. Let’s change the way we are. He did not run on hope and change in 2012 because he knew like, okay, well I’ve been president for four years. I can’t tell people, Hey, we got to start hoping things get better. So that’s why Trump is having a problem. He has not evolved his campaign strategy. You know, he is a one hit wonder. That’s what it is. You know, we came up with a catchy tune, but he can’t repeat that success because it was luck, not talent that got him where he is today.