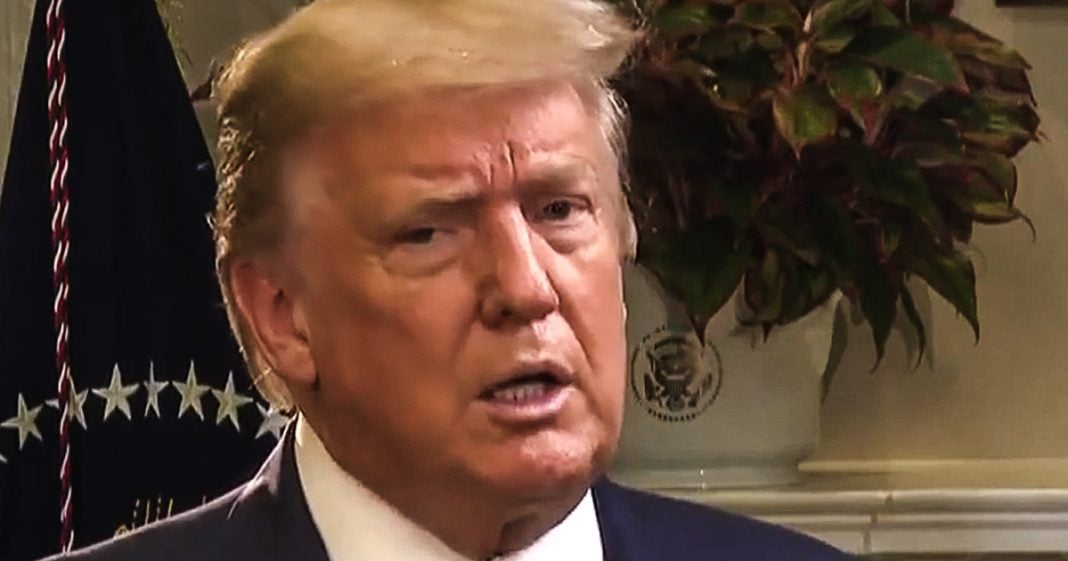 Donald Trump suddenly reversed course about mail-in voting, but only in one particular instance: Florida voters. The President said this because he votes by mail in Florida and he claims that Republicans in the state have created a great system to do so. But he’d better be careful – there are a lot of new voters in Florida who have an axe to grind with the Republican Party, as Ring of Fire’s Farron Cousins explains.

Yesterday, it looked like Donald Trump had apparently changed his tune with regards to the safety of American citizens, voting by mail. Donald Trump now says this system is safe. The system is secure. The system is tried and true. He called it. But as usual, there’s a catch to this. It is not the entire country’s voting system that is safe and secure to vote by mail. It’s just the state of Florida folks. If you live anywhere else in this country, according to the president, Nope, system sucks. Don’t even bother trying it. You should just probably not even vote, but if you’re in Florida, heck yeah, request a vote by mail ballot today. Here’s what the president sent out on Twitter. Actually, this is just one of many tweets that he sent out about this subject. He said, uh, whether you call it vote by mail or absentee voting in Florida, the election system is safe and secure. Tried and true in Florida. I encourage all to request a ballot and vote by mail hashtag manga. Um, he also went on by the way to say that the Democrats in Florida tried to dismantle or attack the vote by mail system. Uh, but the Republicans in the States stood up for it. Uh, let me tell you something. I’ve, I’ve spent more time in Florida than you, mr. Trump. Um, and that’s funny because you’re more than twice my age, but I’ve been here longer.

You see, here’s the thing, bud Democrat, Having attacked voting rights in Florida in any way. In fact, Democrats have been fighting diligently To expand those. You see it, It’s your party. The Republicans that have been actively trying, uh, especially in recent years to take voting rights away from people. They’re, they’re the ones who instituted that horrendous poll tax. They’re the ones who are guilty of the voter purges that kicked eligible voters off the voting rolls that helped steal the election in 2000 and 2004. So everything you’re saying is a lie, except for one, the system is safe. It’s safe everywhere. And you know that, but you’re getting your ass handed to you because you’ve repeatedly said that voting by mail is not safe and everybody then points out, but you vote by mail and he votes by mail in Florida. So now he’s saying, well, when I do it, it’s okay. He’s back to that old saying when the president does it it’s okay.

Listen, Voting by mail is 100% safe and the president knows this. He also knows that Republicans in the state of Florida vote by mail to the tune of about 60,000 per presidential election. He also knows that Republican secretaries of state across the country have been warning him over the past few days that, Hey, your attacks on vote by mail are causing Republicans to not vote by mail. This year, they’re calling in saying, I’m not going to do it because it’s not safe. And we have to tell them that you’re freaking lying. So Trump is trying to ease both of those concerns. One that he does it too, that he suppressing turnout. But I got some news for him so far in the state of Florida, which he is saying is totally safe. Giving Republicans absolutely no shade to try to change it. Um, you’ve had $1.9 million MCATs request ballots by mail, but only 1.3 million Republicans that is a 600,000 vote difference in a state where the presidential election is usually within a hundred thousand votes that doesn’t bode well for you.

And I go ahead and tell you one of those 1.9 million is my ballot, and I can promise you, I will be voting against you, uh, in November with that ballot, actually, as soon as I can turn it back in, as soon as it shows up and I can vote in turn and then yeah, I’m not voting for you. So there’s one, there’s at least one that’s not going to go to you. And I’m willing to bet that some of the tens of thousands of former felons who do have the right to vote back now, uh, they’re going to remember by the way that the Republican party tried to restrict them of the right to vote, and I can promise you a lot of them, aren’t going to look too kindly upon that. They’re probably going to hold a bit of a grudge I’d imagine. And that grudge isn’t with Democrats it’s with your party.