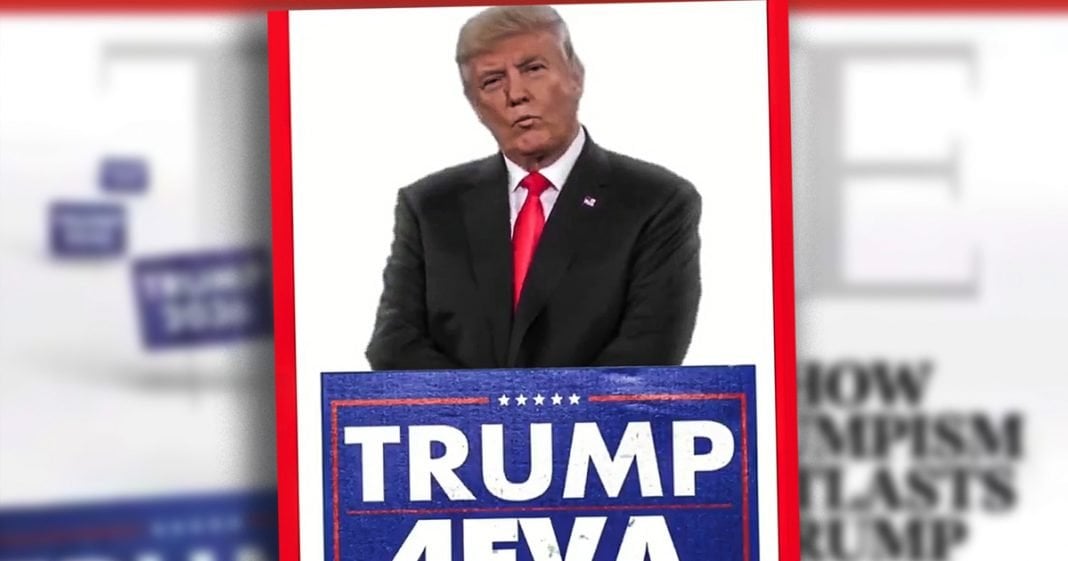 After a particularly bad day, Donald Trump attempted to cheer himself up with his favorite unconstitutional idea of being president forever. He tweeted out a video of a mockup Time Magazine cover showing Trump 2020, Trump 2024, and so on, eventually ending with Trump 4Eva. This is how he soothes himself after a long day, and that’s just as worrisome as the thought of this crazy person never leaving the White House. Ring of Fire’s Farron Cousins discusses this.

Let’s be honest folks yesterday was a pretty bad day for Donald Trump. Uh, if for no other reason than the fact that that Axios interview that made him look like an idiot went viral. Most people, if you were on social media yesterday, you saw that clip. You saw how unprepared the president is, how unprofessional he is and how he certainly does not like when a good interviewer asks him tough questions and calls him out for his nonsense. So he was a little depressed. So I guess in an effort to cheer himself up at the end of the day, he decided to tweet out, uh, for, you know, uh, God only knows how many times he’s tweeted this thing out, but it’s the little video clip that shows Trump forever. You know, it’s a mockup of a, a, I think a time magazine cover that has little signs, you know, Trump 2020 Trump, 2024, 2028, 2032.

And he keeps going and going and going for all of eternity. And then it ends of course, with Trump at a podium. And the thing underneath him says Trump forever Trump forever, because that’s what he wants. And this again is not the first time he has tweeted out this video clip. It is not the first time. It is not the second time. It’s not the 10th time that he has made some kind of reference to staying in office longer than is constitutionally allowed. But I think the more interesting part of all of this is the fact that he did this as a way of self soothing after a bad day, that is the psychological damage that this man is suffering from. That he can only feel better about himself when he tweets this thing out. And it’s not just tweeting it out. It’s the responses to it.

One, he loves pissing off liberals. And of course, anytime he tweets it out, you’ll see the liberals in the comments doing that. I fell victim to it. I retweeted it with comment. Uh, uh, cause I was, I was angry. And of course you do have plenty of the manga suck ups in the comments telling him, yes, we love you. We love you. We love you. And that that’s shoots him. After that horrid interview went public makes him feel better. He loves triggering the liberals. He loves the unfettered admiration that he gets from. The conservatives made him feel good. He probably slept a little better because of that. But folks, this man is dangerous having to do that, to calm yourself down. After a bad interview, we’re talking about 25th amendment level stuff right now. That’s where we’re at. That’s where we need to be. Every in the United States Senate, that is not calling for the 25th amendment, which is literally all of them because none of them are calling for it. They’re all, every one of them, an accomplice to the president’s mental decline. They are an accomplice to the president’s dangerous mental illness that he is inflicting upon the United States. This isn’t normal.

What he tweeted out is technically unconstitutional. It’s not a joke. It’s not funny. It’s not cool to trigger the libs or get all this admiration. It’s illegal. Maybe not illegal to suggest it, but he, if he ever tried it, it would be, it would be the end of the United States Institution. Typically not something Republicans like to joke about, right? This is a serious matter. Donald Trump is a dangerous human and we cannot allow him to have another term. We have to tell him in November, get the hell out and don’t ever come back and for good measure, we have to send that message to his children and other potential offspring in the future as well. Trump needs to be four years and out, and then never again. Should somebody named Trump serve in the white house.