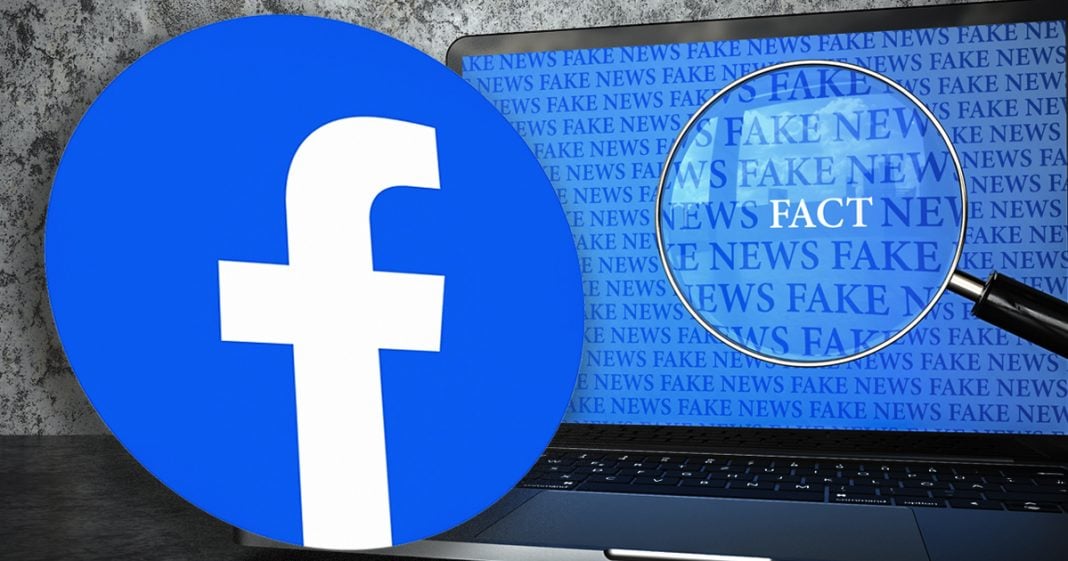 Republicans love to claim that Facebook and Mark Zuckerberg have some kind of hatred towards Republicans, but the truth is that the social media giant is essentially over-correcting by hiring the goon squad from The Daily Caller to serve as fact checkers for their site. The Daily Caller has a smaller subsidiary called Check Your Fact that does this work, but it is made up of the same people at The Caller. Ring of Fire’s Farron Cousins discusses this.

Republicans, including those serving in a high ranking positions in Washington, D C in both the house and the Senate love to tell us that Facebook somehow has this vendetta against right-wing personalities, right-wing news sites, you know, right. Wing politicians, whatever it is, Facebook, according to these Republicans is out to get Republicans and every now, and then it is important to remind these, uh, boneheads that that is not true at all. Not even a little bit. You see, here’s the truth about Facebook, Facebook and Mark Zuckerberg have given plenty of money to Republican politicians over the years. Uh, in fact, the amount of money that they’re giving to Republicans, and of course, Democrats, uh, has been increasing over the last few years because Facebook does not want more regulation to come in to, uh, kind of break up this massive monopoly they’ve got going on. So they’re going out there giving money to Republicans, giving money to Democrats, to spreading it around evenly, not showing real favor towards any one particular party.

So that alone kind of blows up this Republican talking point, right? And if that’s not bad enough for you, then how about the fact that Facebook, as part of their fact checking, uh, industry that they’ve got going on now has actually hired a daily caller subsidiary. Yo, a little fact checking company owned by this right wing propaganda website called, uh, check your fact. And they are one of the very few groups that gets to determine what is and what is not fake news on Facebook. What gets those little, a warning signs that says, Hey, this is an accurate, this can’t be verified. You shouldn’t trust this site.

And it is a daily caller funded program. So the question is who funds the daily caller? Well, according to the daily caller’s recent financial disclosures, the people who are funding the daily caller include the Donald Trump for president campaign. Uh, the national Republican senatorial committee, the national Republican congressional committee, um, Trump make America great again, committee and, uh, the Republican national [inaudible] committee ish, that’s essentially every single facet of the Republican party in just the last two years has given tens of thousands of dollars to the daily caller. The same people who that Facebook somehow has a grudge against Republicans are in fact actually giving money to one of the organizations that does fact checking for Facebook. Okay. So Republican politicians are in essence paying the fact checkers, Facebook, who they say are somehow biased against Republicans, huh? Weird stuff. Right? Oh, well I’m sure that’s just a coincidence or an oversight on the part of these Republican politicians because they understand that they are lying through their teeth about Facebook having some kind of indebted against Republicans.

Do Republicans get dinged more on Facebook? Yes, they do. Why? Because they spread more fake news. They’re not the only ones who spread fake news, but they do spread more of it. They’ve actually done studies on this in the last two years and they’ve confirmed this old white Republicans on Facebook are far more likely to share fake news and fake stories from websites that cannot be trusted. You know, Eagle, stormer.net, daily, republican.org, whatever these idiotic websites are that you’ve never heard of that kind of come and go just as quickly too. These are not real journalists. These are not real reporters. They don’t have actual facts. If they do contain any links at all in their stuff. It just links back to their own articles where they’ve made stuff up. And so it is important to have fact checkers. It’s also important to have independent fact checkers, checkers, excuse me, who don’t have a loyalty to either party, but when you have a group like check your fact from the daily caller, that’s been funded to the tune of hundreds of thousands of dollars by literally pretty much every Republican organization out there. Those aren’t fact checkers you’ve got propaganda’s moles working within your organization. Now Facebook.