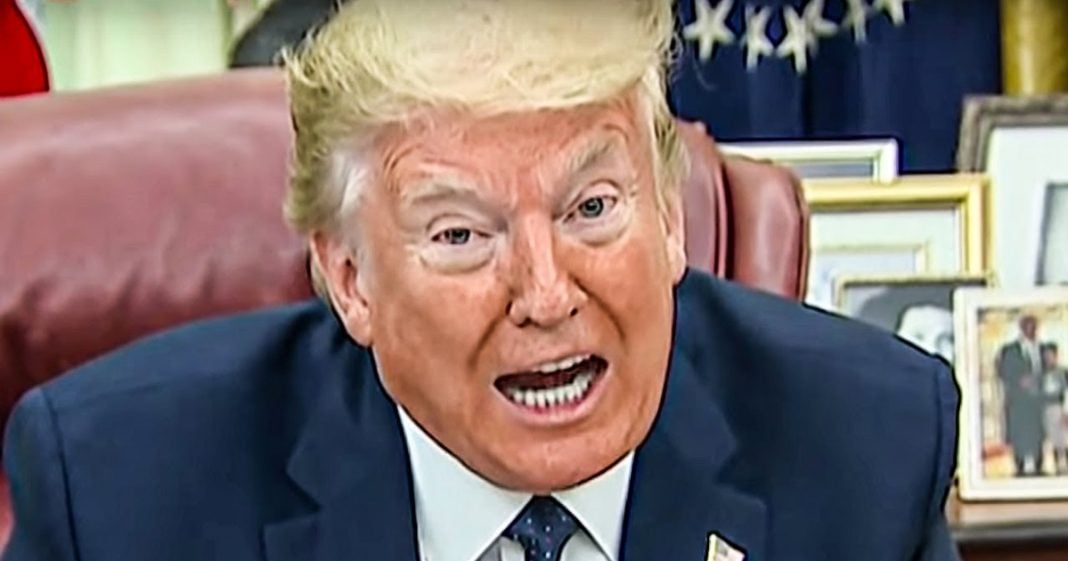 Donald Trump woke up furious on Monday morning after the state of Nevada voted to allow mail-in voting for November’s election. The Democratic-controlled state government doesn’t believe that people should risk their safety to vote in the general election, but Trump knows that this means the state will likely go blue and therefore he refuses to allow it. The President threatened to “see them in court”, and Ring of Fire’s Farron Cousins explains why Trump’s own words will be used against him if that happens.

So Donald Trump apparently woke up furious Monday morning, uh, when he accused the Nevada state legislature of illegally passing a piece of legislation. But of course, that piece of legislation happened to be expanding male in voting and Donald Trump believes that any to extend voting rights here in the United States is clearly an illegal move. And more importantly, an attack on the Republican party itself here is what Donald Trump tweeted out. First thing, Monday morning, he said in an illegal late night, coup Nevada’s clubhouse governor made it impossible for Republicans to win. The state post office could never handle the traffic of mail-in votes without preparation using COVID to steal the state, see you in court. Oh please, Oh, please take this to court. And I’ll explain why I want you to take this to court and just a moment. And it has to do with your tweet, cause you already gave up the game.

Uh, but first of all, you called this illegal. And again, this was a state legislature that passed past legislation, literally in their name. That’s what they do. Um, it’s not illegal to expand voting. And furthermore, the Republican secretary of state for Nevada actually said that, you know, they did their mail and voting for their primary. Not that long ago, they didn’t find any fraud. So your argument that, Oh, this is going to be fraud written, which you’ve said repeatedly, uh, that’s not true. This fraud you claim is out there simply has not materialized. And that’s good. Second claim you make in their post office has no time to prepare. Uh, dude, we got three months in three months, you got plenty of time to prepare. But what you’ve done is you’ve put your little handpicked crony in charge of the United States post office to intentionally cripple it.

You’re trying to slow it down because you want it to fail. The only reason this would fail is because you’re actually trying to make fail. Here’s the thing. If, if it’s safe enough to send driver’s licenses, tax returns, social security checks, uh, EBT cards, hell the census. If it’s safe enough to do all of that by mail, then it’s safe enough to vote by mail. Okay? But here’s the thing. All right, let’s get down to the heart of it. You specifically say making it impossible for Republicans to win the state, that phrase in your tweet and in your press conference a couple of months ago where you said, if we had mail them voting, it would be the end of the Republican party. As we know it, uh, those two statements together already made you lose your court case before you even file a challenging lawsuit because you’re admitting that this is partisan.

It’s not based in law. It’s based in partisanship. You do not have the standing necessary based on the arguments you have already made publicly to file this suit. In other words, your big fat mouth already lost your case for you. That’s what we’re looking at right here. So please challenge this in court. Please do. Cause I would love nothing more than for a judge to have to read this tweet or play the clip. You know, the, the, whoever the attorneys play that clip of you saying that in court. Cause that’s not going to end well for you. You’ve already admitted that suppressing the vote is the only thing. Keeping Republicans in power throughout this country. You’ve admitted it that’s on tape and now we got it in a tweet as well. And if you think that’s going to win you a court case, even with all your little handpick judges across the country, they don’t owe you anything else. They’ve already got their lifetime appointments. You screwed yourself because you can’t keep your stupid mouth shut.