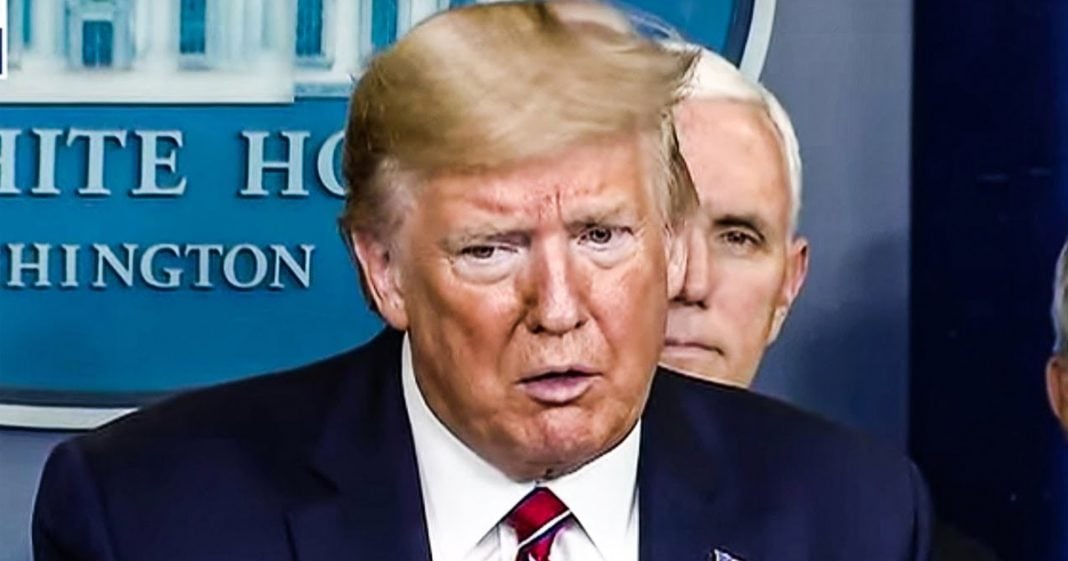 Donald Trump’s presidential re-election campaign has been going down in flames for months, and now Republican strategists fear that he’s out of time to fix it. The problem actually has less to do with time remaining and more to do with the fact that Trump wants to run his campaign his way, and not the way that Republicans want him to. Ring of Fire’s Farron Cousins explains the disconnect between the two groups.

According to a new report in Politico yesterday, Republican strategists across the country are terrified. They’re terrified right now of the calendar, because as it stands right now, yesterday marked exactly three months until the presidential election on November 3rd, three months. And in that same time period, Donald Trump has, uh, his campaign has announced that they’re having to suspend their ad campaigns, uh, temporarily, they’re going to start them back, but they’re going to have to retool their message because all the stuff they’ve been trying so far, just isn’t working with the public, you know, trying to create this sense of fear because of the whole, uh, protest going on that didn’t work, trying to paint Joe Biden as a, not cognitively there that backfired on them. And Trump looks even crazier than Biden. And so they’re going to figure something else out, but he’s none of this is working.

Um, and so Republican strategists, according to this report in Politico, they’re admitting now, like time’s up, there’s less than three months now until the election. Yeah. States those that have expanded male and voting are going to start mailing out their presidential ballots in a month, in a month, only 10% of the U S electorate right now. And latest polls claim that they are undecided. But 61% of that 10% say that if the election were held today, if they had the vote today, they would vote for Biden. That 10%, by the way, is one of the smallest numbers of undecideds that we have had in recent presidential election history. So these Republican strategists are worried. One, Trump doesn’t have a message to, there’s not that many undecided voters out there. And Trump’s started getting destroyed in the polls and three, the undecided voters that are out there, they’re all leaning towards Biden right now.

And Trump has nothing to offer. But most importantly, he’s out of time. These strategists that spoke to Politico even admit that even if there were an October surprise that was damaging for Biden and made Trump look awesome because of the expansion of mail-in voting, a lot of people would have already voted. So in October, surprise, they say is essentially meaningless. Oops, maybe, maybe, maybe the Republicans should have backed one of those challengers that Donald Trump had in the early days of this year, right? I mean, that’s the thing that happened. There were other Republicans who were trying to primary Donald Trump, but the party actually allowed their little state Republican parties to, uh, pass resolutions saying no matter what, we’re only going to back. Trump. We won’t even entertain the thought of supporting another Republican and look where it got you. You recognized the danger of this man.

You knew, you know, that he had never hit 50% approval rating in aggregate polling every now and then there’d be an outlier poll. He’d have 50, 51% approval, but never in the aggregates. When you took the average of all the polls, this man never had the support of even half the country at any given time, you knew his policies were unpopular. You knew his personality was unpopular. You had the chance, you had some, you know, moderate Republicans or at least Republicans pretending to be moderates. You could have done something about it. Then hell, you could have voted to remove him from office during the impeachment. You could have done that, but she did. You stayed with him. You pledged her loyalty to them. You hitched your wagon to this loser. And now you’re just being taken along for the ride. There’s time. There’s absolutely time.

And I still am not convinced that Joe Biden’s even going to win this. I still think Trump can pull it out, but not because he’s going to do something great, but because Biden’s probably going to do something stupid, sorry, we’ve seen things that’s not good, but Biden’s the only one who can really control whether he wins or loses at this point because the Democrats kind of like the Republicans pick the worst possible person they had and said, all right, you’re it go? It’s not pretty. It definitely is not pretty. But you know, if the choices are Trump and Biden, yes, there is a clear choice that is much better in that is Biden, but both of them are still pretty bad, pretty weak, but Trump is weak and out of time, he has no message. He’s not winning over voters. He’s failing with the pandemic. He’s failing with the economy. He’s failing with the protest. He cannot unite the country. He doesn’t know what he’s doing and he’s damn sure not going to let these Republican strategist reign him in. That’s not who he is. It’s not who he’s ever been. And Republicans can only sit back and watch in horror as what is predicted to happen in November. March has ever closer.