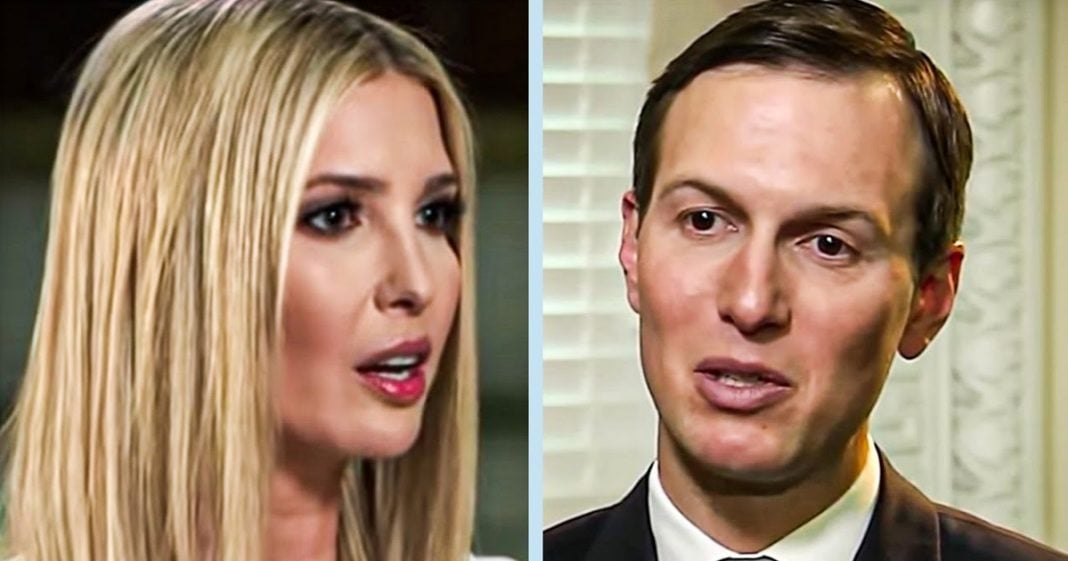 Ivanka Trump and Jared Kushner managed to pocket a staggering $36 million in 2019, in spite of the fact that they are just simple White House advisers. This information was released late Friday evening in a financial disclosure form that the couple was hoping would be buried in the news cycle. But the massive conflicts of interest of the two cannot be ignored, as Ring of Fire’s Farron Cousins explains.

Everybody in the world of politics knows that if you want a story to go away, you drop it on a Friday evening, right? That has been the case for decades here in the United States. Everybody heads into the weekend, not as many people are paying attention to the news. Things happen over the weekend. So by the time the cycle picks back up on Monday, whatever you dropped on Friday evening is ancient history in the world of politics. And the Trump administration thought that that would be a good time to release their financial disclosure forms in hopes that nobody would be paying attention. And for the most part they were right. But, uh, luckily there are some really good journalists out there who were paying attention. And what they found was that Ivanka Trump and Jared Kushner in their combined financial disclosure form made at least $37 million in 2019, which is 7 million more than they made in 2018.

And of course the two are riddled with conflicts of interest. Now here’s the thing. The financial disclosure form does not list the exact dollar amount. It only lists a range of how much they made 37 million is the bottom of that range. So they made at least 37 million possibly up to where is it? Uh, at least 37 million, possibly as much as 156, 7 million while working both of them. This couple in the white house has advisors to Donald Trump. It’s a lot of money for somebody to be making in the white house. And of course they are riddled with conflicts of interest, according to the sunlight foundation between Jared Kushner, Ivanka Trump, and of course, big daddy, president Trump, they have identified at least 600 conflicts of interest between these three Indians vigils. Mostly most of them having to do of course, with all of the, uh, property holdings that they have between them.

But in the case of Ivanka, she has all these patents getting all of these patents from China. She is profiting off of then of course, most of her holdings with regards to her patents with China, uh, haven’t been subject to the president’s trade war. So right there, that is the biggest possible conflict of interest, but the list goes on and on again, the sunlight foundation, he’s done a phenomenal job of just kind of laying out exactly what the conflicts are. You can search through their database and see all of these. But the bottom line is that these conflicts exist because these individuals, Jared, and Ivanka, and of course Donald himself, they didn’t divest from their holdings. They’re still playing an active role in their business life in to being employees at the white house. That’s where the problem arises had they divested had, they had no interest in this whatsoever, no more financial holdings of any kind.

This wouldn’t be a problem, but at the same time, if they had done that, they wouldn’t be making between 37 million and 157 million a year while working at the white house. So you can see why they wouldn’t want to divest being in the white house and still controlling their money. That’s big business. And after all, as we have repeatedly said, and will repeatedly say to the end of this administration, this entire family got into politics because they saw it as a brilliant way to line their own pockets. And that is exactly what they’re doing here. And they thought they could pull a fast one on the public release, these documents late on a Friday evening, cause nobody would pay attention. But Kushner, people are paying attention. And this, this is the kind of story that we need to highlight because this shows us exactly what this administration is all about and why they’re in politics to begin with.