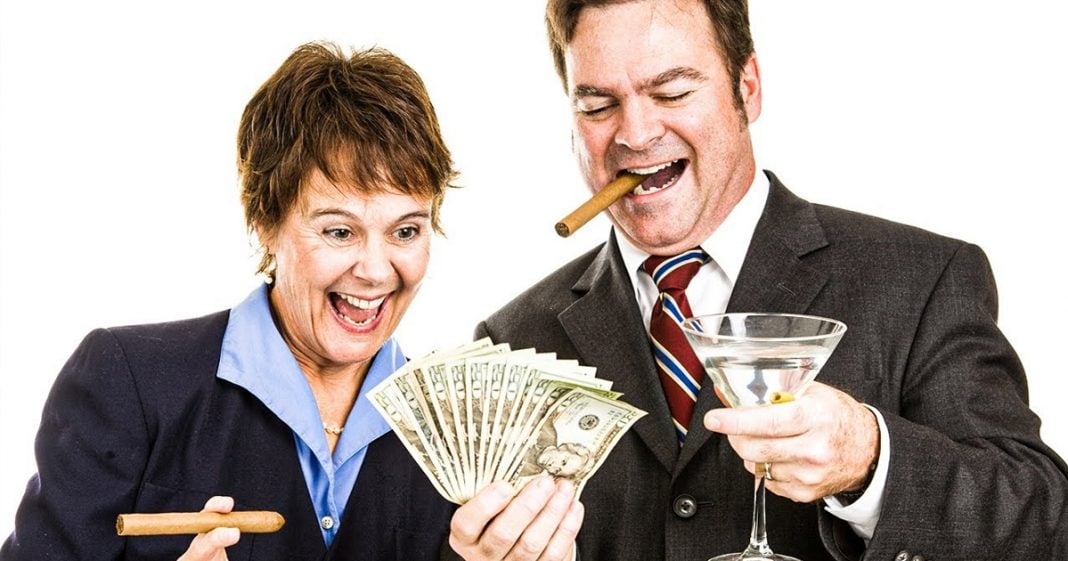 Millionaires and billionaires have been attacking the idea of extended unemployment benefits, along with Republican politicians, because they say it incentivizes people to stay home and not work. The problem isn’t with Americans being greedy or lazy – it is the One Percenters who are being greedy in this scenario. If they created good-paying jobs that people wanted to return to, we wouldn’t be in this mess right now. Ring of Fire’s Farron Cousins discusses this.

Over the past few weeks, we have seen members of the 1%, including members of the Trump administration and certain members of a Congress on the Republican side attack. The extension of increased unemployment benefits during this pandemic, a pandemic during which more than 40 million Americans have lost their jobs. And they were getting an extra $600 a week in unemployment benefits. As a result of the cares package passed by Congress and signed by the president. Well, Republicans have repeatedly told us that we cannot have it more lucrative for somebody to stay home than it is for them to go to work. And for a while, they were the ones pushing that talking point. But in the last two weeks or so, we have seen something else happen. We’re starting to see other members outside the administration members of the 1% telling us that we just cannot extend these unemployment benefits any longer. We cannot, as CEOs and executives are now telling us, make it more lucrative for people to stay home than it is for them to go to work.

If anyone thinks for a second, that the problem in the United States is that poor people are either lazy or greedy or a combination of both. Then congratulations, you’re part of the problem. The real problem is that there is greed that is crippling our economy right now, but it’s not the greed of people sitting at home because they don’t have a job. The greed is from those same CEOs, people like Elon Musk who are attacking these increased benefits for people who are without work. These are the people to a degree along with many, many others who are not paying proper wages to their employees. The minimum wage here in the United States on the national level is still $7 and 25 cents per hour. If we bumped it up to $15 an hour, meaning that there would not be a single job in this country that paid you less than $15 an hour.

Do you know how much that would equal for everybody? If you’re currently making minimum wage and working full time, uh, 600 bucks a week. Oh my God. Then at that point, it’s a wash. They would make just as much money going back to work. But if your paying your employees, crap wages, and suddenly they get more money not having to put up with your crap wages, would you blame them for that? I mean, what’d you, I wouldn’t, it’s kind of like these corporations that are already pulling in billions and profits, but still taking of tax cuts, taking advantage of government subsidies, which is just free cash in their pockets. I don’t hear Republicans talking about how bad that is because they’re just pocketing that money and not doing anything with it. But a new report actually out today showed that the people who received the extra $600 a week in benefits, their spending went up by 10%.

So yeah, they were getting extra unemployment benefits, but do you know what? They were also doing spending money to help the economy? That’s a good thing we want that we need spending without spending. We don’t really have an economy, right? So stop being pissed off and creating these phony talking points about the working poor. They deserve better than that. They deserve a living wage, but these CEOs, the one percenters they’ll never do that. Why? Because they would have to give up a tiny little bit, tiny, little bit of what they have. And they would rather lock that money away in a vault. Never see it, never use it, never touch it. It just looks good on paper. There’s sometimes that papers, you know, hidden away in the Cayman islands, they don’t even get to see the paper. They would rather lock their money away to never be used for all of eternity. Then pay their workers, a living wage. That is the problem with this system. Poor people are not lazy. Poor people are not greedy. Sure. I guess they are. Some of them are because that’s human nature, but I can promise you, you’re going to find more greed. You’re going to find more laziness. And that top 1% than you would ever find in all of the rest of the 99%.