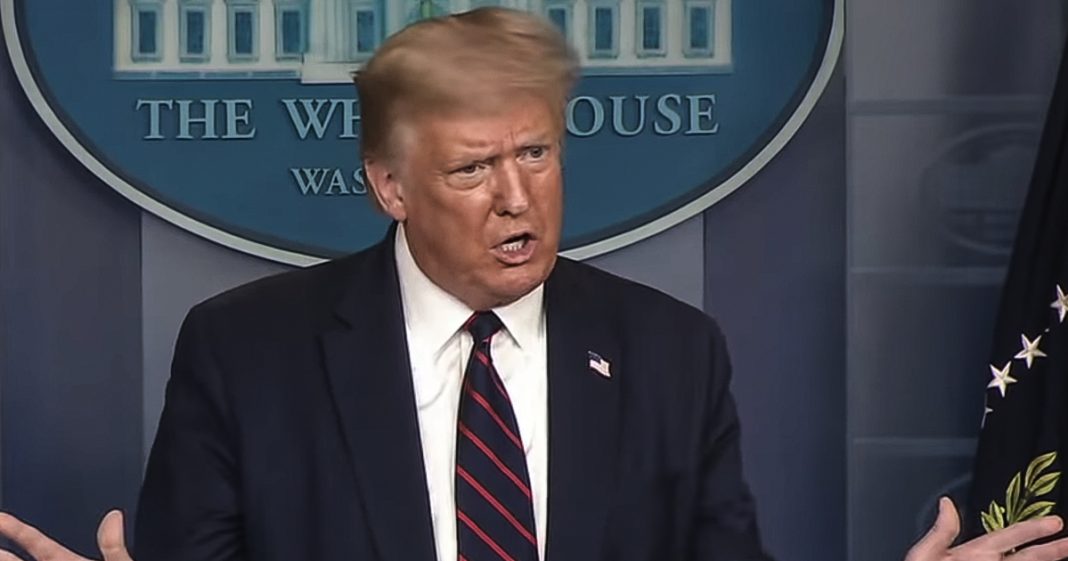 The Trump administration wants the next round of Coronavirus relief to include nearly half a billion dollars so they can redecorate the West Wing of the White House. That is an absurd amount of money and a completely illogical request at a time of need for this country. Ring of Fire’s Farron Cousins discusses the selfishness of this administration as Americans continue to suffer.

Right now both the house and the Senate are still trying to come to terms on a new Corona virus relief bill American’s tens of millions of them are at risk of losing their homes due to foreclosure in the coming days and weeks more than 40 million Americans have lost their jobs. And the Trump administration wants to make sure that in addition to all the Pentagon money that they’re begging for in the new bailout package, they also want to make sure that a senators and representatives include $377 million so that they can renovate and redecorate and quote modernize the West wing of the white house. That’s right at a time when Americans are struggling to get by, they haven’t had any kind of relief. They got a check from the government four months ago.

Wow. And the white house says, Hey, make sure whatever you do with this relief bill, you got enough money for us to slap a new coat of paint on some of the walls here. And that’s going to cost roughly $377 million. Yeah. Cause that’s kind of a deal breaker. If you don’t have it in there. Here’s the thing. I understand the need to modernize the white house, which is what they’re describing it as, uh, the white house by the way, is not to too far behind the times technologically speaking, uh, because there’s modernization that happens every couple of years. So some of this money is in fact actually going towards just straight up redecorating.

I don’t know how many more security cameras they would need in the white house. I have to imagine based on what we know that every square inch of those, those hallways, the corridors, the working areas, uh, they’re covered by cameras. Well, you want to, you want to get four K cameras instead. Why, why do you need so much money for this? And why is this a priority right now? And why does this have to be in a Corona virus relief bill? That’s those are the questions I have because here’s the thing. If the white house did believe that there was a danger that they were, you know, really far behind technologically speaking, somebody could easily break into the white house, get their hands on the president. Okay. I understand. That’s a horrible thing, regardless of who the president is, we cannot have that. So you need the money to fix things up, do a little bit, you know, Hey, you know what?

Maybe buy a couple of new chairs who knows. Um, you could easily put that to Congress. They’re not irrational. They’ve approved every budget you’ve given them. They seem to be okay with including millions and millions for the actually billions and the regular Pentagon budget. And then millions, whenever you feel like you just want to give them a little treat here and there, they would absolutely pass a straight up white house modernization budget. So why do you need to put it in the coronavirus relief effort? That’s the problem folks, everyone trying to put in their little 2 cents, their little pet projects, their little money grabbing things here and there because they know the public’s not going to be paying too much attention. The public says, get this thing passed. We need relief. We need help. We need to not have 100 million people evicted from their homes.

We need to take care of 40 million Americans who don’t have jobs. We, the rest of us need another round of stimulus so that we can help keep ourselves afloat. So sure, whatever it’s got this in there, just pass it. Oh, it’s got this thing in there too, to whatever, just pass it. We need it. And that’s why the white house is trying to do it right now. So there’s as few strings attached as possible. And as few people objecting, they’re not going to have to answer as many questions. If this white house modernization budget of $377 million is buried in a $1 trillion stimulus package because that’s what the total is right now. $1 trillion. But no, I’m sorry. Pet projects such as this, you can take this to Congress yourself. They can pass a separate piece of legislation, letting you get all the new, cool toys and tricks that you want. Keep it out of the stimulus package. People are suffering. People are dying a thousand people a day. He actually more than that every day in this pandemic, every day you drag your feet. Another thousand plus people died. I think we can hold off on redecorating the white house for now.