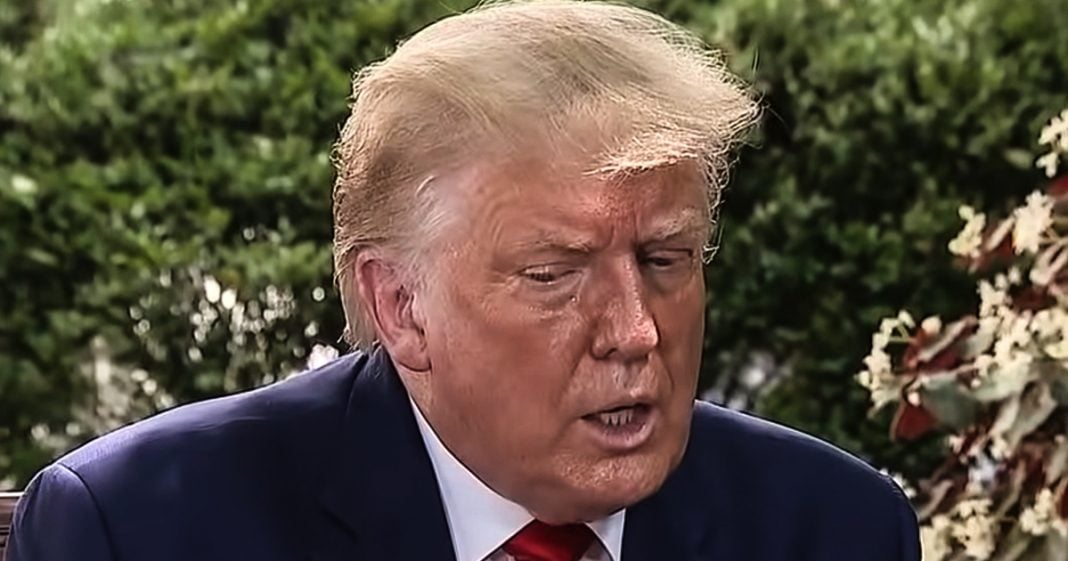 Two weeks ago Donald Trump promised the nation that he would be signing a big, beautiful healthcare bill into law. Most of us warned at the time that this was a complete lie, and now that the two-week deadline has passed, it looks like the President was full of it. The problem is that we need a new healthcare bill, and we have more than 1,000 Americans dying everyday during this pandemic. This is a time for action, not lies, as Ring of Fire’s Farron Cousins explains.

Two weeks ago during an interview with Chris Wallace from Fox news, Donald Trump’s swore, he promised that in two weeks he was going to be signing some kind of big, beautiful healthcare plan, uh, to take care of America. Now at the time, nobody really believed him. I think maybe some Republicans did, but those of us in the media, we knew that wasn’t the case. You had great investigative reporters who went through the congressional record, uh, both house and Senate to see what kind of bills were in the works. What was coming up on the agenda and nowhere in any of the committees in either a chamber of Congress, nowhere was there a healthcare bill bill. So nobody knew where Donald Trump came up with this talking point of I’m signing a healthcare bill in two weeks. It was bizarre. Well, he’s missed the deadline. Two weeks was yesterday.

And as we all know, Donald Trump did not. In fact, sign a healthcare bill into law yesterday. He went golfing. If you must know what he did, but he did not sign any healthcare bills while out there on the golf course. So why, why the lie, why the easily verifiable that you’re lying lie. And the answer is because this guy needs a wind so desperately. He doesn’t even care. If we can prove that it’s false. Because as long as there is one person left in this country, willing to believe the BS that he is selling, he counts that as a win. That’s what this is. There are plenty of Republicans in this country who saw that interview on Fox news and said, Oh my God, that’s awesome. That’s great. We’re going to have a healthcare bill. Wow. This guy was really, really doing a good job.

People actually thought that to themselves when they saw that some people not most, but some here we are today. Two weeks later, no healthcare bill averaging a little bit more than 1000 American citizens dying every single day from COVID-19 no relief in sight, no relief bill insight, because Congress can’t come together and agree that Americans actually need help. They’re trying to pack it in with their own pet projects. And here we are, we’re dying. Trump is lying to us and the cycle just perpetuates itself. There is no healthcare bill. There should be. There needs to be. The affordable care act has not done a single thing to STEM the tide of this pandemic. Unfortunately, I’m sorry. It just hasn’t.

When healthcare is tied to a job when healthcare costs any kind of money for people, then as soon as the people don’t have money, like the more than 40 million who lost their jobs during the pandemic, uh, then it doesn’t matter that you gave them access to healthcare because they can’t use it because they have no money. See what I’m saying? And sure. If the economy was prosperous, if we had price controls in place and every trip to the doctor only costs you 20 bucks, every prescription only costs you 10 bucks. And you think I’m exaggerating about that. That’s actually what health insurance used to be, uh, late nineties, early two thousands. That’s what it was. That’s what your copay was a trip to the ER for surgery, a hundred bucks. I had my appendix out in 2004, cost me $100 for that surgery and overnight stay in the hospital.

But then insurance said, you know what? Let’s stop doing the copay. Let’s start changing, uh, the formula here. And we have done nothing to fix that. We have let that industry grow wild and do whatever the hell they want. And Trump comes along at a time when Americans are suffering desperate, begging for a real leader to emerge and do something. And he says, I’m going to do something. I’m going to sign this bill in two weeks. This man has done a lot of dirty and disgusting things since becoming president of the United States, but giving false hope, intentionally giving false hope to a nation that is quite literally dying is definitely right up there with the most disgusting things this man has ever done.